Taking to the Road to Measure Air Quality 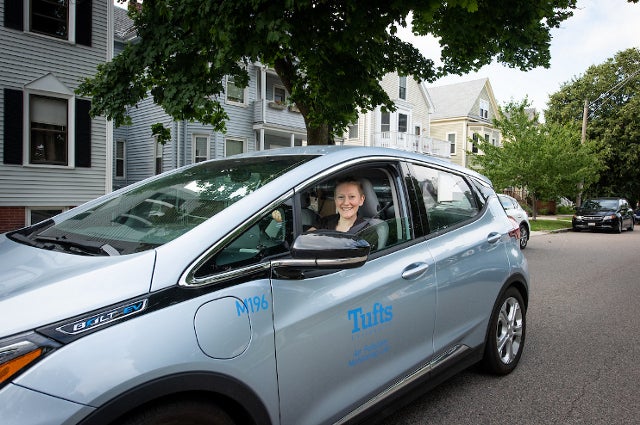 Ida Weiss, E21, and Tyler Tatro, E21, have driven a seven-mile route around Greater Boston so many times in the last year that they long ago lost the need for any map. They head south to Quincy, loop around Squantum, a barrier island overlooking Boston Harbor, then turn north to Winthrop.

They are not driving just any car. It’s a mobile lab for detecting air pollutants, and they are gathering real-time data that they hope will contribute to a fuller understanding of how pollution generated by jets landing and taking off at nearby Logan Airport may be impacting air quality in neighboring communities.

Their work is part of a Federal Aviation Administration-funded effort to help develop sustainable alternative jet fuels, led in part by Professor John Durant and Research Assistant Professor Neelakshi Hudda in the Department of Civil and Environmental Engineering, who are experts in mobile monitoring of ambient pollution from ground and air transportation. (Their most recent study found a direct connection between the COVID-19 lockdown and improved air quality in Somerville, Massachusetts.)

Data is the necessary starting point for good science, and that’s where student researchers Weiss and Tatro have been indispensable, said Durant. Over the past year, usually individually, they have set out three to four times a week at all hours of the day and night in a blue, electric Chevy Bolt, dubbed TAPL for Tufts Air Pollution Lab. The compact hatchback is fully equipped with battery-powered instruments that measure hazardous particulate matter and a suite of gases.

Both seniors have demonstrated remarkable maturity, dependability, and self-sufficiency, said Durant. “They’re willing to drive at very odd hours to get the data we need,” he noted. “The airport doesn’t sleep, and we need data from around the clock. We need to know how pollution patterns change because of changes in flight activity. We really couldn’t do this work without them.”

It’s a bright, blustery April day when Tatro and Weiss meet outside the Science and Engineering Complex at Tufts to demonstrate how TAPL works. Vents protrude from each side of the car, connected to piping that feed into several instruments. Each instrument has a discrete job, but collectively they offer insight into the level of ultrafine particles in the air. Ultrafine particles are invisible to the eye, and can infiltrate the lungs and cause serious health problems and exacerbate existing ones. 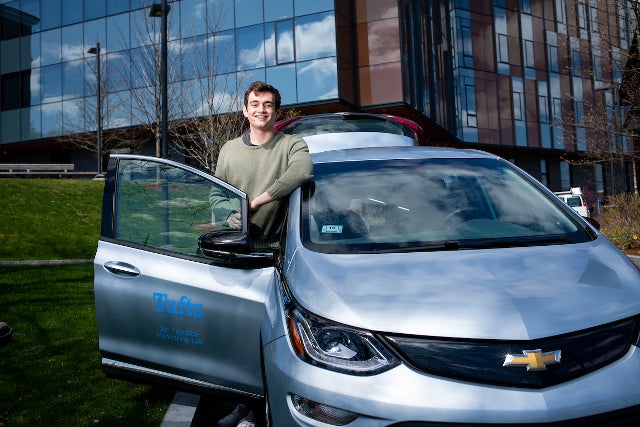 “The mobile monitoring I did at Tufts helped me discover that I liked meteorology and atmospheric science,” said Tyler Tatro, in front of the mobile Tufts Air Pollution Lab. Photo: Alonso Nichols
“This is an aethalometer,” says Tatro, pointing out another device. It captures black carbon—sooty black material emitted when cars, trucks, and airplanes burn fossil fuel. According to the EPA [PDF], black carbon comprises a significant portion of particulate matter humans breathe. Inhaled, it is associated with health problems that include respiratory and cardiovascular disease and cancer. And because it absorbs light as heat, it warms the air, contributing to climate change.

Another instrument measure nitrogen dioxide, associated with aircraft emissions, while a third measures the number of ultrafine particles in a given volume of air.

All three data streams merge into a laptop computer in the front seat, and are later integrated with relevant data, including GPS and meteorologic conditions. When combined with additional data being gathered 24/7 from four stationary monitors, the researchers hope to broaden their knowledge of how pollutants related to Logan are dispersed.

Weiss, who is writing a senior thesis on black carbon, said that pulling all variables together makes for a complex analysis, “but it’s not as complicated as much as it is meticulous.”

One challenge is trying to understand what fraction of airborne particles is airport related. Weiss explained the factors involved in making the calculations, noting that in her black carbon study, she hasn’t found data to say conclusively that the airport is leading to higher concentrations of harmful particles. “Science is never easy,” she said.

Changing atmospheric conditions have been challenging throughout the project. “Before we plan our week, we always look ahead at projected wind speed, wind direction, temperature, and chance of rain, because all those factors will affect sampling,” Tatro said. “If there is an afternoon thunderstorm and the rain takes the pollutants out of the air, do we stop or keep going? In the end, you just have to trust that the data we’re gathering will add up and lead to findings that can guide future decisions.”

Both students, who were introduced to air quality research in Durant’s Air Pollution Control class, are grateful for the opportunity to be participating in research.

“Tufts as a whole does a really amazing job of not just providing students research opportunities, but letting us run with it,” said Weiss. “It’s feeding intellectual curiosity.”

It’s also guiding students toward careers that build on what they’ve learned. After graduation, Tatro is headed to Florida to work on a Ph.D. at the University of Miami in atmospheric science. He will focus on smoke-cloud interactions over Ascension Island, in the south Atlantic, and how they can affect things like rainfall or solar power.

“The mobile monitoring I did at Tufts helped me discover that I liked meteorology and atmospheric science,” he said.

The work has been meaningful for Weiss, too, as she mulls options as an environmental engineer focused on sustainability, including its relationship to social justice. The study has opened her eyes to how air pollution in Boston disproportionately impacts different populations, and it informed a mini-project of hers in a GIS course, in which she found that Boston’s designated environmental justice populations were being exposed to higher levels of black carbon.

“This is not surprising,” she said, “but just seeing that burden reflected in our data—in the higher pollutant concentrations near the airport, near these busy roads, and in these lower-income or minority neighborhoods—that’s made the challenge of environmental justice much more real for me. I’m really passionate about these issues, and I can see myself continuing to work on them in the future.”