For 17 years, Professor Elie Rebeiz, 63, inspired students at the School of Medicine 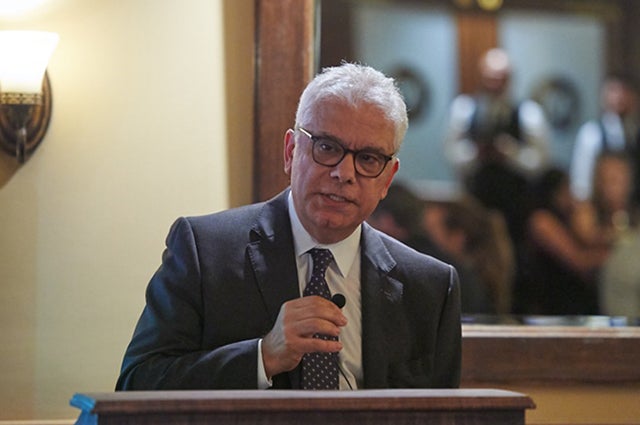 Elie Rebeiz, a highly regarded otolaryngologist and beloved member of the Tufts University School of Medicine faculty, died on March 25 following a battle with pancreatic cancer. He was 63.

A passionate educator, skilled surgeon, and dedicated father and husband, Rebeiz was appointed as a School of Medicine faculty member in 1994. He served as interim chair of otolaryngology before becoming chair in December 2003, a post he held until his death. He was also otolaryngologist-in-chief for Tufts Medical Center. 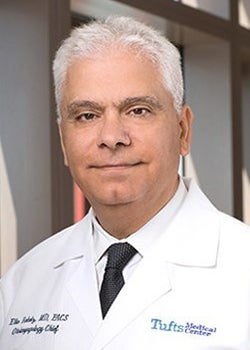 “He was adored by patients and students alike, and clearly made an impact on the lives of everyone around him,” said Peter Bates, interim dean of the School of Medicine. “He was held in the highest regard by his colleagues and received praise from his students and residents.”

In a course evaluation, one medical student wrote that seeing Rebeiz, a department chief, make time to listen to the concerns of a nervous patient was unexpected and encouraging.

“Dr. Rebeiz stayed with her and answered all of her questions with kindness and with patience, even though many of them were redundant,” the student wrote. Watching someone in leadership who had clearly not lost his attachment to his patients “was inspiring . . . because it mirrors how I want to practice when I am an attending physician.”

An accomplished teacher and researcher, Rebeiz was an active speaker and presenter and contributed to hundreds of published articles, book chapters, and abstracts throughout his career.

Born in Beirut, Lebanon in 1958, Rebeiz grew up during a tumultuous civil war that sparked his passion for helping those around him. He completed his undergraduate studies in biology and his medical school training at the American University of Beirut, where he also completed his residency in otolaryngology. He met his wife, Liliane Yacoub, a future pathologist there, too. The couple moved to Boston, where Rebeiz completed fellowships at Massachusetts Eye and Ear Infirmary and Lahey Clinic Medical Center before joining Tufts in 1994.

At Tufts, he received many medical accolades, including awards for his teaching, research, and clinical abilities. He was also named a Boston Magazine “Top Doctor” every year from 2012 to 2021. However, he said loudly and often that his greatest accomplishments were the relationships he forged within and beyond the Tufts community.

He is credited with building the Tufts Medical Center Department of Otolaryngology from the ground up. He was a father figure to many residents, faculty, and staff members. Close colleagues remember Rebeiz as generous, respectful, personable, and endlessly available.

“A consummate teacher and dedicated mentor, Dr. Rebeiz was our go-to faculty for many of our pipeline programs,” said Joyce Sackey, dean for multicultural affairs and global health. “He never said no to a request to take a student. From students in our summer high school programs, to premedical students in our enrichment programs and, of course, to medical students, Dr. Rebeiz was always ready to teach, mentor, and provide opportunities for students to be exposed to his beloved field of otolaryngology.”

In his rare moments outside of Tufts, he could be found listening to music, organizing movie nights for his residents, walking his daughter’s dog, or traveling. His family described him as a man of the world, as comfortable in Paris as in Boston or Beirut, but most at home wherever he was with his wife and daughters, one of whom, Lina, is a first-year student at the School of Medicine.

He is survived by his wife of 31 years, Liliane (Yacoub) Rebeiz; his daughters, Joëlle Rebeiz and Lina Rebeiz, M24, of Boston; his son-in-law, Patrick Laughlin, of Chicago; and his three sisters, Ghada, Nada, and Rosie Rebeiz, of Beirut.

Two New Professors Land at the School of Medicine