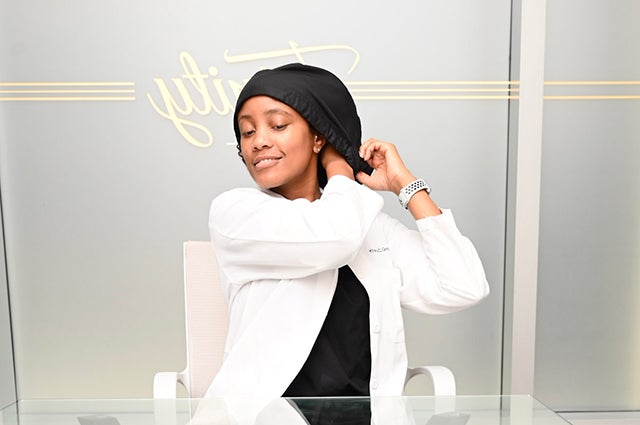 When Joke Alesh, a Rhode Island dentist, became a new mother, one of her worries was whether germs would be able to hitch a ride home from the office on her long, braided hair and pose a risk for her baby. And when COVID hit, the need to cover all her hair at work became even more urgent.

But most scrub caps for health care professionals weren’t designed for Black women and men with natural hairstyles or textured hair, or, for that matter, for anyone with a big head of hair. They weren’t roomy enough, and the friction created by the cotton caps was very drying. She found herself doubling up, forcing her scrub cap over the kind of hair-protecting bonnet that she wore to bed—“but that was not a clean or professional look,” says Alesh, A11, D15, MG16 (MPH).

“In dental Facebook groups, the question kept coming up: Does anyone know where to get satin-lined scrub caps in plain, solid colors?” Alesh says. “And when it seemed no one could solve the problem, I decided it would have to be me.” 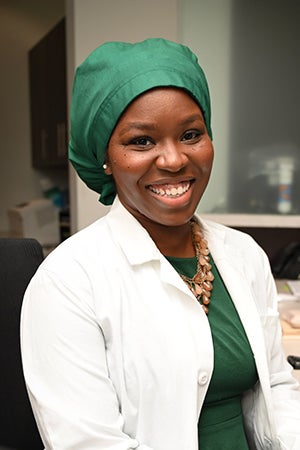 The result was Headgear by Doctor Alesh, her line of satin-lined scrub caps and bonnets for health care professionals. The business launched this past December, with head coverings in three colors, and within four months, with steady demand, she had increased the offerings to 19 colors; satin-lined headbands are on the way. The caps are produced locally in her hometown of Providence.

Designing what she wanted to wear was not new for Alesh. “I’m Nigerian, and in our culture, we make a lot of our own clothes,” she says. For a big event, it would not be uncommon for her to buy fabric and sketch out an outfit that could then be professionally tailored. She went through a similar process to create the scrub caps. Her goal was to get them on the market by the end of 2020, and she made her deadline with just days to spare. At the same time, she juggled working through the pandemic at a community health center and in private practice, all while her daughter’s day care was shuttered.

She sees nothing incongruous in being a dentist with an apparel line. “It’s my personality. When I get an idea, it’s not, ‘this is not in my lane’—I don’t feel I have a lane. I do whatever interests me.”

In response to customer queries, she modified some of her cotton-broadcloth caps to include buttons for mask loops, “to give the ears a break.” She also sells synthetic work wigs, manufactured by other companies, that align with her sense of professional style. “If I have my scrubs on all day, and then need to break for dinner, or a meeting, my hair can still be protected,” she says.

‘I’ve gotten really good feedback,” Alesh says. “This project means a lot to me, as someone who has natural hair, textured hair, really long hair.” While some satin-lined caps in print patterns were already available when she developed her product, she likes that her solid colors present a professional look. “It’s a really simple design; it’s my aesthetic; I didn’t want these to be loud,” she says.

“As a Black woman in America, I see so many things that in their creation, did not consider me. The first time I realized that Band-Aids were called ‘skin tone,’ I cried,” she says

A product designed by a Black woman, for other Black women, is powerful, she says. “It is important to feel seen.”