How One Phone Call Led to a Lifelong Friendship

Growing up in Kentucky, Sara and I felt like outsiders. After we moved North for college, meeting again was the friendship equivalent of falling in love. 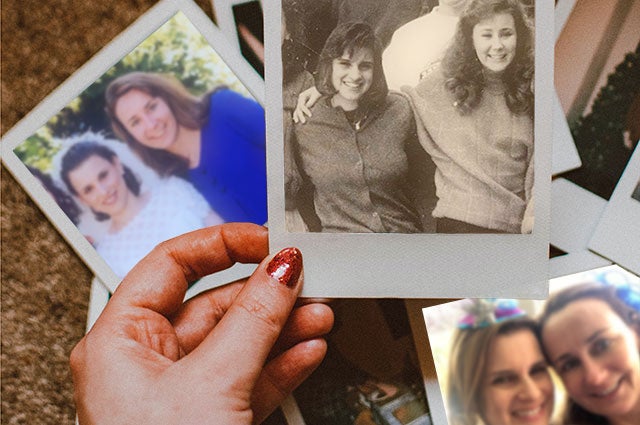 This is the third in a series of essays called My Moment, in which Tufts graduates from across the university share stories of personal transformation—from small moments that offered new insight or inspired fresh thinking to life-changing moments that altered the course of a relationship or career. Do you have a story that you’d like to share? Let us know at now@tufts.edu.

Sara and I can’t pinpoint exactly when we first met—it was probably early in junior high—but we both remember the moment that our casual friendship shifted into something more substantial. It was after my first semester at Tufts, when I returned to our hometown for winter break.

The two of us had both felt like outsiders growing up in the mostly homogenous community of Lexington, Kentucky, in the 1980s. We were both Kentucky transplants with grandparents in New England and moms who still had embarrassingly strong Yankee accents despite decades of living in the South. Sara’s Judaism and my Catholicism further separated us from our mostly Protestant classmates.

Although never best friends as kids, we attended junior high and high school together. We both played defense on our high school’s first-ever girls soccer team and served on the executive board of the Student Council.

Sara and I were among the few of our classmates who ventured north for college. Sara left for Northwestern University while I headed to Tufts, a university many of my Kentucky friends had never heard of.

The transition to college was challenging. Once again, I felt like an outsider. Many Tufts classmates confused Kentucky with Kansas, some saying, “I know it’s someplace there in the middle.” I hadn’t realized how many Tufts students would already have some connection from attending the same summer camps or boarding schools or owning neighboring summer homes. My four siblings and I had spent many summers visiting our grandparents outside of Boston, so I had expected to fit in on a New England campus, but sometimes I felt like someone forgot to give me the manual for elite college life, covering the songs everyone learned at camp, how to ski, and what sushi was. 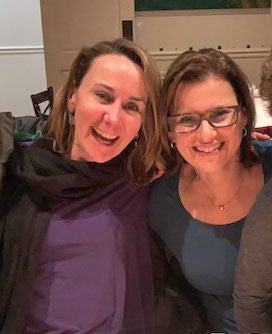 Julia Brady Hoexter, J91, and Sara Mason Ader, F97, shown in 2017, grew up together in Kentucky but became closer friends after they moved away. Photo: Courtesy of Julia Brady Hoexter and Sara Mason Ader
Coming home for winter break felt strange. That fall, I had been immersed in a new level of academic rigor, with faculty and classmates who’d challenged me in ways I’d never imagined, and I had survived. I felt good about it, but I was also exhausted from the experience. I wondered if Sara was feeling the same way after her first quarter at Northwestern.

Soon after returning to Kentucky, I called Sara (on the landline at her parents’ home) and convinced her to join me at a friend’s party. You know how you hear people talking about the moment they fell in love? I think there can be a friendship equivalent of that. Sara and I talked to each other in a corner that entire evening, connecting on a new and deeper level. We realized we both were struggling to find our tribes at college but no longer shared as much common ground with our high school friends either. I left the party knowing we were just beginning something special, but I could never have imagined how our paths would continue to intersect, diverge, and intersect again in the decades to come.

As college juniors, we both chose to dislocate ourselves once more, leaving our campuses to travel to places where we were outsiders yet again. I spent a semester in Vienna and was among the first American sightseers to be welcomed into Eastern Europe after the fall of the Berlin Wall. Sara devoted three months to a journalism internship in the hills of West Virginia, negotiating the working world for the first time.

The feeling of displacement we felt then was nothing compared to the year after college graduation, when we headed on overseas exchange programs to separate regions of Germany. Living in a foreign country without the cadre of American students I’d had in Austria was overwhelming and lonely, especially because international phone calls back then were inconvenient and ridiculously expensive.

Thankfully, Sara was an easy call away, and we began a ritual of daily calls from work. We helped one another keep things in perspective, and the periodic visits to one another’s host cities were a lifeline. I’ll never forget Sara showing me around medieval Bremen, where she was living, and then Sara visiting me in Würzburg during the Mozartfest. We picnicked on the grass outside the Würzburg Residenz, a cultural gem built in the 1700s that has played host to the festival since 1921. There we bonded over our shared love of German chocolate, discovering that Ritter Sport’s dark chocolate peppermint was a favorite for us both.

Back in the United States, we enjoyed about 18 months when we were both living in New York City, but soon parted for areas we’ve now called home for more than two decades—ironically, each of us moving to the region where the other attended college. I headed off to the University of Chicago to pursue an MBA, and Sara moved to Somerville for her MALD at Fletcher. The school had been on her radar ever since our senior year of high school, when her dad (a college professor) learned that I was headed to Tufts and told her of its excellence in international affairs.

I relished the opportunity to visit Sara while she was at Tufts and when she married her Fletcher classmate Jason following their graduation in 1997, I was there to hold the chuppah. In the years since, we’ve supported each other though the challenges of parenting, careers, relationships, and aging parents.

When the COVID-19 pandemic upended our lives, we found ourselves talking frequently on the phone again, just like we did in Germany decades ago. We talked of shared experiences like helping our kids navigate e-learning, binge watching Netflix shows, and worrying about the pandemic’s impact. Freed from commutes and kid commitments, we spent more time on books and other opportunities to learn. We decided to create a blog/podcast about friendships and began to research the science about these relationships.

One eloquent book we discovered is Together: The Healing Power of Human Connection in a Sometimes Lonely World by Vivek Murthy, who recently assumed the role of surgeon general after previously serving under President Obama. Murthy says that loneliness is often at the root of the physical, emotional, and mental health issues that cause human suffering. He concludes, “Quite simply, human relationship is as essential to our well-being as food and water.”

His words reminded me just how important Sara has been in my life—how she has helped me not just survive but thrive, especially in situations where there is no road map. She is an empathic listener, cheering me on when I need it, and telling me hard truths when I need that too.   I also realized how easy it is to neglect our most precious relationships, even when we are suffering from a lack of connection.

Sara and I vowed to do even more to nurture our friendship and to encourage other people to value and nurture their important friendships, particularly as we emerge from the pandemic. To avoid returning to over-scheduled lives that distract us from what really matters, we need to be intentional. It’s been decades since that moment at the party in Kentucky when Sara and I “clicked,” and I’m still grateful that I invited her—and that she said yes.