At the Critical Intersection of Public Health and Homeland Security

Promoting wellbeing of ‘communities and families’ makes the nation safer, says the triple Jumbo who is chief medical officer for DHS 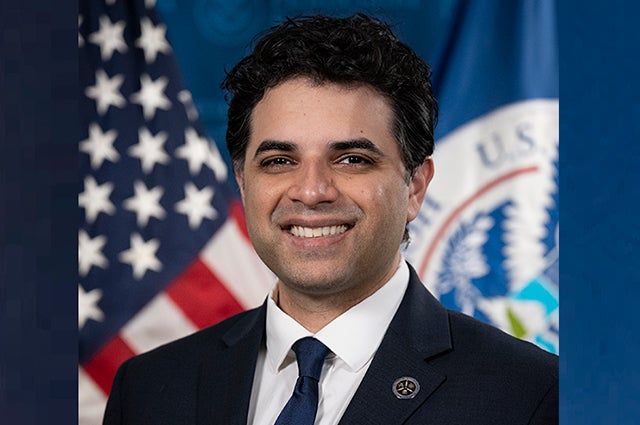 Earlier this spring, physician Pritesh Gandhi, who studied international relations, economics, medicine, and public health at Tufts, was sitting across from his boss, Alejandro Mayorkas, the secretary of the Department of Homeland Security. As the chief medical officer for the department, Gandhi is the principal adviser to DHS leadership on health-related matters.

“Here we were, two children of immigrants, in a position to ensure that every single human being who is on American soil is treated with dignity and respect,” says Gandhi, A04, M11, MG11 (MPH). “And that moment underscored the responsibility we have in fulfilling the charge of our country, of our Constitution, of the expectations of the American people. That moment, and every day I’ve spent on the Southwest border over the last few months, seeing and hearing the stories of those in our care and custody and those who take care of them, have really moved me.”

Gandhi was appointed to the DHS spot by President Joe Biden in January, after serving as associate chief medical officer at People’s Community Clinic in Austin, a federally qualified health center, and as a clinical assistant professor at Dell Medical School at the University of Texas. In 2020, he made an unsuccessful bid in the Democratic primary in Texas’ 10th Congressional District, where he made health care a key part of his campaign.

At DHS, he sees a strong health care system as essential to every aspect of the department’s mission, and not only at moments of crisis.

“We have to allow ourselves to think critically about how we view threats to our community, whether those are internal or external threats,” he says. “When we think about homegrown threats to the United States, often these threats come from a position of a lifetime of being marginalized.

“How can we engage, from a public health and medical perspective, in marginalized communities to ensure that we are putting the wellbeing and health of families first? By doing so, we are not only promoting health security, we are fundamentally changing the role that public health has in people’s lives.”

COVID has inevitably altered the priorities and day-to-day operations of DHS, as it has for all aspects of the federal government, Gandhi says. It has also sent a strong message about the importance of public health.

“I think what this pandemic has shown us is that if we think about the need to build systems that promote the health and wellbeing of communities and families, we’re going to be better off as a nation,” he says. “We’re going to be safer. That’s the joy of being in this role.”

In advance of his address to the graduating MD students of Tufts University School of Medicine on May 23, Gandhi talked with Tufts Now about his new role in Washington.

Tufts Now: What’s involved in being the chief medical officer for the Department of Homeland Security?

Pritesh Gandhi: I serve as the principal adviser on all matters medical and public health to the secretary of DHS, the assistant secretary for countering weapons of mass destruction, the FEMA administrator, and other senior leaders within DHS. We liaison with other federal agencies and serve as a point of contact for all medical and public health issues tied to homeland security. If you were to take that one step further, what it really means is to ensure that when we think about the work of homeland security, we are taking a “health in all policies” approach, and that applies to all of the components that make up DHS.

It's everything related to COVID, but it’s so many other things. It’s about food, agricultural, and veterinary defense. It’s thinking about new biologic and chemical agents that could be used against American citizens and ensuring we are prepared.

What has the change been like going from a hands-on role at a community health center, to being part of the administration in Washington?

I miss clinical medicine and I’m working to ensure that I can still see patients. And I think that matters, because it is really easy to lose sight of the work when you’re not faced with the stories of the American people day to day.

We live in a world where it is easy to write off the struggles of our neighbors and fellow Americans because of how polarized things are, and when you’re in the room and have the privilege of being welcomed into the life of an individual or family, those stories, I think, anchor the work that happens and needs to happen as it relates to policy making.

What challenges do you face in this new position?

There are two issues that dominate, and I knew ahead of time this would be the case. One is, of course, COVID, and being able to think strategically as it relates to health security for our borders and ports of entry. Second is to ensure that we have built up an evidence-based approach as to how we engage with COVID and the health and wellbeing of children and those in our care and custody along the Southwest border. Those have been the issues that have dominated my first 100 days.

People inform policy—people’s stories. I think that is so important. But people also are policy and when you look around, it is why it is also important for Americans to be involved and civically engaged. Your story, your history, your narrative influence your perspective and the perspective you bring to the table with decision makers.

I’m a Tufts Jumbo; I’m trained in the world of active citizenship; I’m a first-generation American, the son of two immigrants. I’m a father to three young daughters who have skin the color of mine. And I’m a physician, a primary care doctor who spent a career working for underserved communities. And so from these perspectives, I can see in real time how these life experiences have influenced the way I think about policy.

It was not too long ago that COVID wasn’t even on our radar. What are the other health-related issues that continue to engage DHS?

There’s a host of issues that we focus on—chemical and biological defense; radiological and nuclear defense; food, agriculture, and veterinary medicine; thinking critically about the health effects of WMDs, domestic terrorism, and conventional terrorism; building an electronic health records system for DHS. There is our programming on harm reduction from opioids, and the interface between that at the federal level and law enforcement on the front lines across the country. There is so much richness to the work of medicine in DHS that’s not COVID, that are really clear priorities for the department as we hope to move past this pandemic.

Any advice for your fellow Jumbos?

It is such an important thing for Tufts students to know that you can make a difference in this world. And what you learn in college and the work that you do is relevant. I think the role I’m in now, and the national security space that I work in fits perfectly with my background in international relations and the foundational courses that I took when I was at Tufts.

One Year After He Fled His Native Country, an Afghan Rebuilds His Life at Tufts