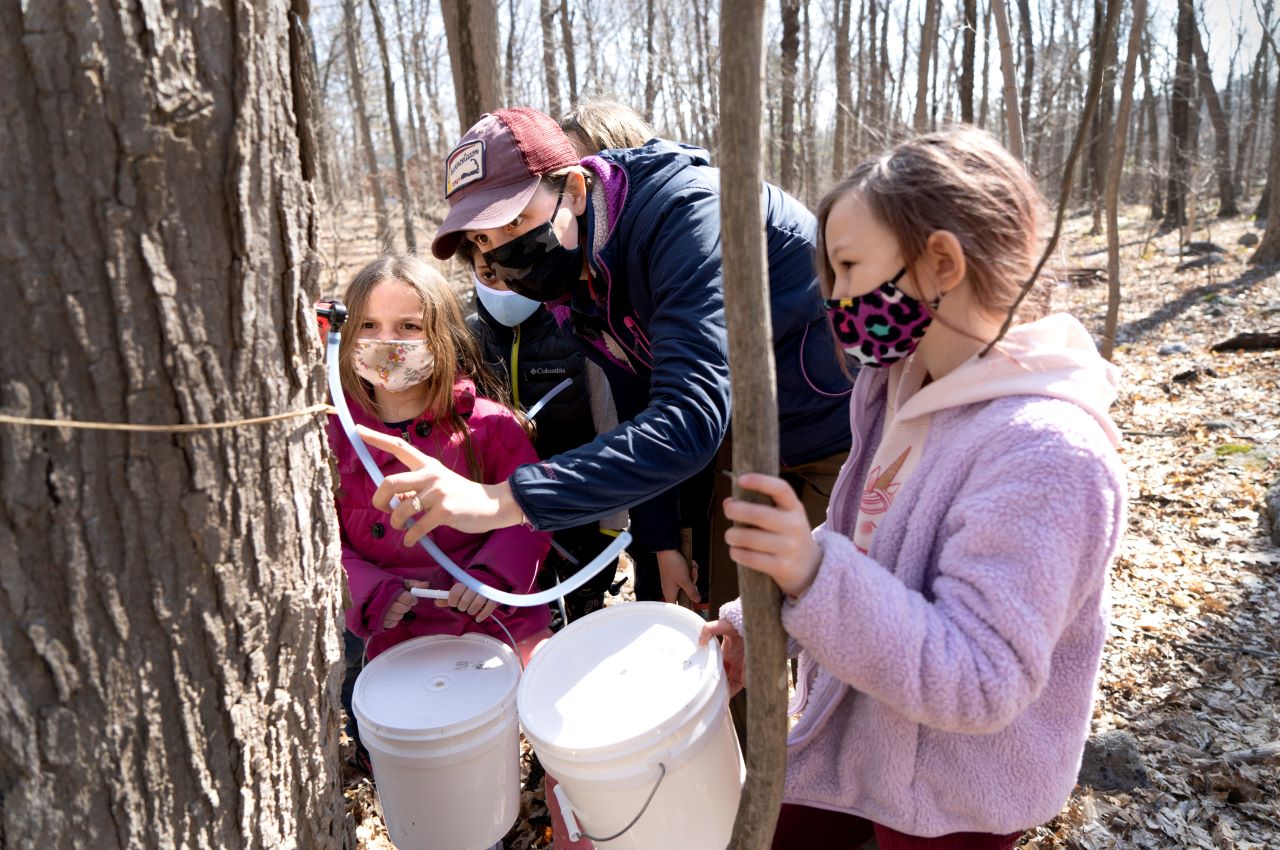 It’s January 2021 and the ground is blanketed with snow. The thermometer nailed to the wooden cabin reads 32 degrees Fahrenheit. “Bring some tinder for the fire,” Kira LaFosse-Baker instructs a group of children wearing puffy snow pants, winter boots, hats, and masks. They disperse into the nearby forest, returning with a collection of twigs. Using a flintstone, LaFosse-Baker brings the fire to life. So begins the school day at Home Base Learning Center, the brainchild of husband-and-wife team Dan Warren, AG03, AG16, and Amy Warren, AG03, AG09.

When the COVID-19 pandemic shuttered schools around the world, Home Base also closed for several months, but this school year, students participated in small in-person pods all fall, winter, and spring. Located on a Boy Scouts of America (BSA) camp on the edge of the Blue Hills Reservation in Milton, Massachusetts, Home Base provides academic structure and community for homeschooling children, with the outdoors as their primary classroom.

Enrollment in Home Base more than doubled this past year, as concerns about airborne illness increased the appeal of being outdoors and many families struggled with remote education. But a growing interest in outdoor education may predate the pandemic. The number of forest kindergartens and outdoor preschools in the United States more than doubled from 2017 to 2020, according to the North American Association for Environmental Education. Research suggests that spending more time in nature improves children’s academic performance, increases their emotional self-regulation, and boosts physical activity, the association says. 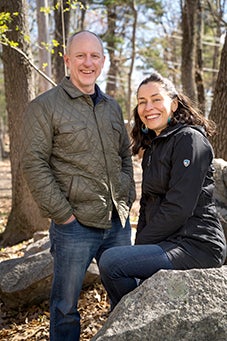 Home Base founders Dan Warren, AG03, AG16, and Amy Warren, AG03, AG09, met at Tufts, where each earned a doctorate in child study and human development. Photo: Jodi Hilton
The main program at Home Base, which runs Monday through Wednesday, now includes 40 fully enrolled children in grades K-8. Their five teachers lead classes in everything from writing and math to learning how to tap trees for maple syrup. An additional 10 students are enrolled in optional weekly STEAM (science, technology, engineering, art, and math) sessions on Thursdays. The cost for a full school year of Monday to Wednesday classes is $8,400.

Taylor Schell moved her 7-year-old son from a Boston public school to Home Base because he began having worrisome emotional meltdowns after his school switched to online education last spring. Though the cost could be prohibitive for some families, she said that as a single mother of two living on a low income, she received “a hefty scholarship” for her son, who is happier now.

“We talk a lot about the difference between nature school and public school,” she said. At Home Base, he notices that there is less homework, more fun, and you have to bundle up on cold days, she added. “He really likes going and that’s such a good feeling.”

The Warrens started developing the philosophy behind Home Base while they were in graduate school, where they met in the master’s program at Tufts’ Eliot-Pearson Department of Child Study and Human Development. They both worked on a study, commissioned by the National 4-H Council and led by Professor Richard Lerner, Bergstrom Chair of Applied Developmental Science, that aimed to define and measure positive youth development. The research stressed the importance of the “Five Cs”—competence, confidence, connection, character, and caring—in the emotional, social, and moral growth of youth. It also suggested that adding a sixth element—contribution—helps adolescents thrive. 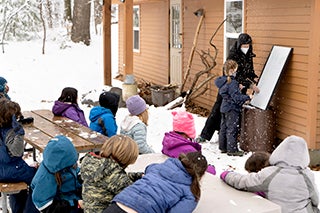 Children spend almost all of their time outdoors at Home Base, no matter the weather. Here, head teacher Judy Pritchard leads a lesson. Photo: Jodi Hilton
The couple honed those ideas as they went on to marry, have two children, and each earn a doctorate in child study and human development at Tufts. Dan, who has also taught fifth grade in Boston-area elementary schools, returned to Lerner’s Institute for Applied Research in Youth Development to study the impact of Scouting on the character development of boys.

It was during this time that Dan, an Eagle Scout himself, first visited New England Base Camp, which includes acres of forest, extensive outdoor training facilities, cabins, and an indoor swimming pool. The camp seemed like a perfect fit for a concept the Warrens call “Open Spaces,” which involves matching underutilized resources like museums, libraries, and camps with the needs of children and families.

The Warrens were also inspired by Ken Danford, the founder of North Star in Amherst, Massachusetts, a facility that supports self-directed learning by children from registered homeschool families. Working with the former Scout executive of the local BSA council, Chuck Eaton, the Warrens set out to create a similar program and bring their “Open Spaces” idea to life.

Since its start in 2016, Home Base has blossomed from a parent-operated cooperative into a professionally staffed learning community operating under the umbrella of the Boy Scouts’ Spirit of Adventure Council.

Tufts’ roots can be seen in the program’s guiding values—positive youth development, social justice, and earth stewardship—as well as in its focus on community and project-based learning. The Warrens hope that within the next five years the program will reach its goal size of roughly 150 young people.

The Warrens’ two children attend Home Base and the couple remains actively involved as volunteers. Dan, who is the director of youth development and education at Fluent Research, and Amy, who is co-author of a textbook called Visualizing the Lifespan, have talked with groups in New York, Rhode Island, Illinois, and Indiana that are interested in developing outdoor education options like Home Base. A similar program, called Base Camp Learning Center, plans to launch in the fall of 2021 at a scout camp in Manchester, New Hampshire.

The influence of Tufts on the Warrens’ ideas about education actually stretches back much earlier than their graduate school years. When Dan Warren was a young child growing up in Somerville, he attended the Eliot-Pearson Children’s School at Tufts. Abigail Eliot founded the school in 1922 and was an early proponent of outdoor education. (Historic photos on display at the school even show children napping outdoors.) Lerner said, “I can’t help but think that Dan, as a student, got that idea from Mrs. Eliot or her legacy.”

Now, the Warrens are applying the ideas of positive youth development at Home Base while building an ecologically enriching experience, Lerner said. The Warrens are “a power couple in developmental science [with] a passion to use their expertise to make the world a better place,” he said. “They are giving kids something that they will naturally gravitate to because it’s fun and exciting to work in the real world.”

Jodi Hilton is a freelance photojournalist based in Boston. She received funding from the National Geographic Society's COVID-19 Emergency Fund for Journalists for this project. Send comments to now@tufts.edu.