Converting from grass to environmentally friendly synthetic turf means more teams, including Somerville youth sports, will be able use the field 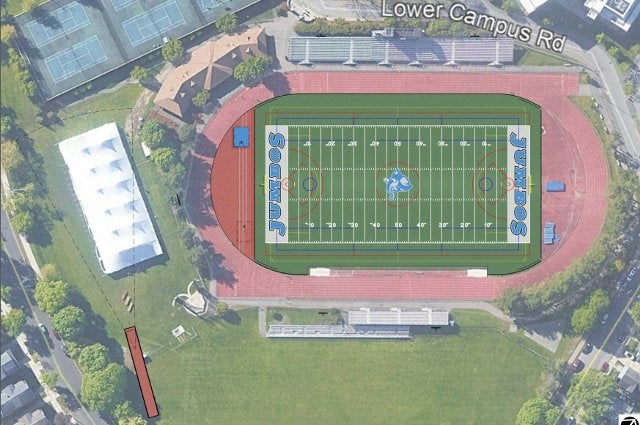 Conversion of Tufts’ football field from grass to an environmentally friendly synthetic turf will score as a win for both the Tufts and Somerville communities when the planned project is complete this fall.

The new field, funded entirely by donors, will be available for a variety of Tufts’ women’s and men’s varsity teams, club sports, and intramurals; Somerville youth sports; and community events such as high school graduations and movie nights.

“As a grass field, the current space is limited to four or five home football games in the fall and several track meets in the spring. The new field will significantly increase that capacity, opening the space up as a campus-wide recreational resource for all our students as well as organized sports,” said John Morris, Tufts director of athletics. “Just as important, it will provide hundreds of hours of playing time to Somerville’s girls and boys youth sports teams, which we know face a shortage of playing space.”

The new turf system will feature natural fibers and organic materials that will require much less maintenance than traditional grass; fertilizer, mowing, and watering will be a thing of the past. A similar system is used by the Massachusetts Department of Conservation and Recreation and was installed at Somerville’s Foss Park.

The conversion will include state-of-the art downward-directed LED lights, which will illuminate the field without spillover to adjacent areas during hours agreed to with the city. Also planned is a video scoreboard that could be used for special events such as community movie nights.

Tufts has submitted its project plans to the City of Somerville, which found that the project is in compliance with local zoning ordinances. “We’re in the process of applying for appropriate permits and look forward to holding a community meeting where Somerville residents can learn more and ask questions,” said Rocco DiRico, director of government and community relations.

The university hopes to begin the project in June and complete the conversion in time for the Jumbos’ first home football game in mid-September.