With lives at stake, a scholar-activist investigates what it will take to fix an alarming health disparity

The numbers are stark: Black women in the United States are three times as likely as non-Hispanic white women to die from pregnancy-related complications—regardless of age, income, or education level. Tragically, about 60 percent of these deaths are preventable, according to the Centers for Disease Control and Prevention (CDC), and the rate of deaths is rising.

The White House recently issued a proclamation addressing “the crisis of Black maternal mortality” and Congress is considering “Momnibus” legislation, but Ndidiamaka Amutah-Onukagha, associate professor of public health and community medicine at Tufts University School of Medicine, is way ahead of Washington.

Amutah-Onukagha is one of only six principal investigators in the country with funding from the National Institutes of Health (NIH) to investigate racial disparities in pregnancy-related complications and deaths, one of several public and private grants the self-described “scholar-activist” has secured in less than a year to support related research, teaching, and community engagement. 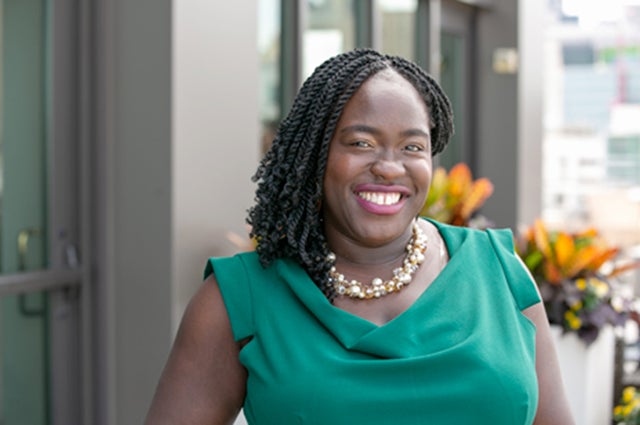 Ndidiamaka Amutah-Onukagha, associate professor of public health and community medicine at the School of Medicine. Photo: Courtesy of Amutah-Onukagha

Her five-year NIH study is drilling deep into Massachusetts state and hospital-specific discharge data to examine maternal health inequities and identify missed opportunities to prevent or treat common but potentially deadly complications such as hemorrhage, hypertension, blood clots, and infection. Massachusetts is more progressive than many other states, according to Amutah-Onukagha, but large disparities still exist.

Amutah-Onukagha is also studying whether hospital “maternal safety bundles” (evidence-based protocols that can be put into place to prevent or mitigate complications) and community–based systems that provide women with doulas (trained supporters who provide physical and emotional aid during and after pregnancy) lessen disparities.

“There’s very little research examining the intersection of race, ethnicity, maternal safety bundles, doulas, and outcomes in Black women at increased risk of severe pregnancy-related complications and death,” she said. “By looking at this data over time, we hope we can create and disseminate a set of consistent, evidence-based practice recommendations that will reduce morbidity and mortality.”

If, as the CDC estimates, 60 percent of pregnancy-related deaths are preventable, why are they occurring so frequently among Black women?

Systemic racism, embedded in policies and norms, is the foundation for these health disparities, said Amutah-Onukagha. “I don’t think most physicians want to do harm, but bias has been baked into the system for generations and it plays out in clinical care.”

For example, the standard formula to determine how risky a vaginal birth would be for women who previously delivered by cesarean automatically assigns higher risk to Black and Latinx women; as a result, these women are more likely to undergo unnecessary surgical deliveries, which are more dangerous for mothers and babies. Studies also suggest that caregivers are more likely to dismiss complaints about subjective conditions such as pain or shortness of breath, both of which can signal serious complications, from patients of color than from white patients.

“Doctors often tell me, ‘that problem doesn’t exist at my hospital,’” said Amutah-Onukagha. “Well, the data would beg to differ. We need to train providers, attending physicians, residents, and nurses to identify and prioritize a racial equity lens when treating Black and brown patients.”

Amutah-Onukagha stresses that changing the status quo requires incorporating the voices of Black and brown women. With a three-year grant from the Robert Wood Johnson Foundation, she and her collaborators are talking with Black women in Massachusetts, their partners and family members, doulas, and clinicians to ascertain the impact of the maternal health crisis on their daily lives. How is it shaping child-bearing and child-rearing and how do women advocate for themselves at the clinical level? “Research to date hasn’t sought out the perspective of Black women and their networks or studied them as assets rather than deficits,” said Amutah-Onukagha.

She has a passion for field research that involves talking with people rather than mining data alone. She likens the process to making meatballs. “You can’t just take the meat out of the package and start cooking it. You have to get in there with your hands.”

A hands-off approach was never an option for Amutah-Onukagha. Raised in Trenton, New Jersey, as the oldest of four children whose Nigerian parents both had advanced degrees, she had “no choice but to be great.” Always fascinated by maternal-child relationships, at age 9 she declared her intent to be a neonatologist. A transformative course in college caused her to switch from medicine to public health.

A standout on her school debate team, she has never been shy about calling out the disparities and injustices she sees. “I’ve always been a rabble-rouser. Now I have the resources to make a difference,” she said.

Amutah-Onukagha’s dream is to create a national center focused on maternal health disparities that would support research, community advocacy, and a student think tank to nurture the next generation of activist scholars. Last July she launched what may be a forerunner: the Maternal Outcomes for Translational Health Equity Research (MOTHER) Lab which brings together 35 graduate and postdoctoral researchers, graduate students, and undergraduates with a range of backgrounds and interests in virtual collaboration. MOTHER Lab members have played key roles in organization of an annual Black Maternal Health Symposium in Boston, research on doulas in Massachusetts, and health policy advocacy.

Working in the lab was inspirational for Alison Moky, A21, MG21, who this spring will receive a master’s in public health in addition to a bachelor’s degree. Moky spearheaded an eight-person team that prepared testimony about racial disparities in maternal health outcomes for the U.S. Commission on Civil Rights, which Amutah-Onukagha delivered to Congress last November. She will continue to serve as a remote research assistant for the lab before pursuing an M.D. specializing in obstetrics and gynecology. “As a woman of color in a STEM field, I couldn’t have asked for a more uplifting and encouraging mentor, professor, and peer than Dr. Amutah-Onukagha,” Moky said. “Her fearless attitude rubbed off on me and I bring it with me into every room I enter.”

A New Role at the School

Amutah-Onukagha brings that same energy to her role as assistant dean for diversity and inclusion for the Department of Public Health and Community Medicine, a newly created position that complements that of Damian Archer, assistant dean of multicultural affairs at the School of Medicine.

“She’s a mover and shaker,” said Archer, “and it’s very positive that we’re continuing to dedicate more resources to diversity and equity.”

Amutah-Onukagha, who also co-chairs the Diversity, Equity, and Anti-Racism Council of the Public Health and Professional Degree programs, plans to create additional safe, healing spaces for Black and brown students, who must process national traumas like the murder of George Floyd as well as daily microaggressions. Drawing on her own experiences, she wants to provide purposeful support for new faculty of color. She remembers her first day as a new assistant professor in public health at Montclair State University. “Of 40 new hires, I was the only Black person,” she said. To prevent isolation and attrition, she hopes to encourage the school to hire junior faculty of color in clusters, so they can learn the ropes together.

The Tufts community she envisions is one where everyone – straight, gay, transgender, Black, white – sees themselves as valued and important. “No one is on the fringes.”

Amutah-Onukagha stresses that getting to that place, whether in the delivery room or the classroom, will require some difficult conversations. “When colleagues say they don’t know how to talk about racism, I say, ‘How do you not talk about these things?’ You may be uncomfortable, but do something.”

“You can’t sit on the sidelines and wait for someone to ask you to dance,” she said, “you‘ve got to get on the dance floor.”