Behind the Numbers of India’s COVID Crisis

From undercounted deaths to vaccine shortages, researchers see signs of a difficult road ahead 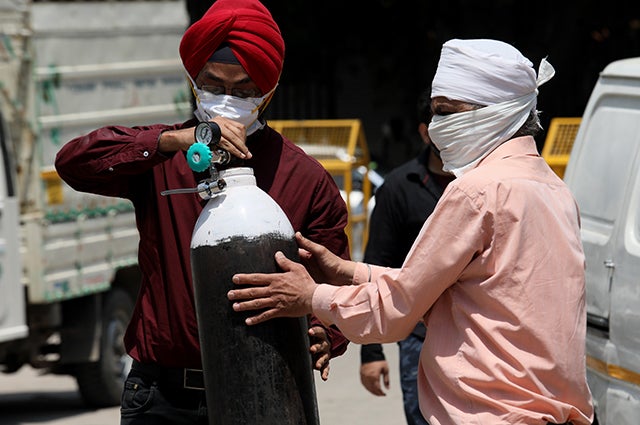 Over the last two months, a devastating second wave of COVID-19 has swept through India. People around the world have watched as a record-breaking pace of infections burdened the nation’s health care system.

On May 27, two researchers who have been studying the pandemic in India for more than a year spoke to the Tufts community about the current crisis. Gagandeep "Cherry" Kang, an infectious diseases researcher at Christian Medical College in Vellore, India, is an adjunct professor at Tufts University School of Medicine and a frequent collaborator with its scientists. Bhramar Mukherjee is a biostatistician and epidemiologist at the University of Michigan’s School of Public Health. Their expertise provided context for India’s emergency and laid out ways to move forward.

The online event, which was moderated by Joyce Sackey, associate provost and chief diversity officer for the health sciences schools and the dean for multicultural affairs and global health at the School of Medicine, was part of a global health seminar series sponsored by the school and Tufts University. Here are some of the main takeaways from the discussion.

The data coming out of India doesn’t show the whole picture. As of May 25, the country has reported 27.4 million cases and 315,000 deaths, but because of an overwhelmed health care system, a lack of infrastructure in rural areas, and a stigma associated with testing in some communities, the actual numbers are likely even higher.

“It is nearly impossible for any country to capture all COVID-related deaths and infections. And part of that is because many infections are silent or covert infections, but also in India, due to a bottleneck in testing, I think many of the symptomatic cases were missed,” Mukherjee said. “And if you don’t get tested, you don’t get classified as a COVID-related hospitalization or fatality.”

Mukherjee and her colleagues have built models to estimate how many cases and deaths have been missed or misclassified. According to their modeling, the virus could have infected as many as 492 million people—36% of the population in India—and caused 1.2 million deaths.

“Statisticians are not magicians—if there is no data, then you cannot really create data—but what we see is that, in all our calculations, it shows that about only 6% of India’s infections are being reported,” Mukherjee said. “That’s why I have been really vocal about the need for data because that really helps us to plan health care resources deployment and also design future policies.”

Gagandeep Kang, a professor of microbiology at Christian Medical College in Vellore, India, and an adjunct professor at Tufts University School of Medicine, spoke at the event about the crucial need to invest in surveillance and preparedness before the next pandemic.

Public health interventions are working, but this is far from over. While India did not declare a nationwide lockdown, many individual states took that step. And in the past week, India’s second wave seems to have finally crested. The percentage of tests coming back positive has fallen to around 10%, half of what it was only a month ago, and daily case numbers have dropped from a peak of over 400,000 to just over 200,000.

But the promising national numbers are only part of the story, Mukherjee said. The numbers are weighted by areas with better access to healthcare and testing; case numbers in some states are still on the rise.

“It would be really inappropriate and unwise of me to say that India's national peak is reflective of all the states,” Mukherjee said. “India’s national peak is really driven by four or five very large states and big metros. Rural India, and also many other states, are actually experiencing the crisis as we talk right now.”

India has a long way to go with vaccinations. Only 12% of India’s 1.3 billion people have received their first dose of a vaccine, and less than 4% of the country is fully vaccinated. The majority of these doses have been distributed in cities, Kang said, but more than two-thirds of India’s population lives in rural communities. Many of these areas don’t have the infrastructure to deliver vaccines, especially in the quantities necessary to prevent further outbreaks.

“This is something that really scares me,” Kang said. “At the pace that we are going, I can’t even begin to make a prediction about when we will do this. It’s beginning to look like somewhere between three and five years. And that’s just unacceptable.”

Even without distribution issues, vaccinating such a large population is a monumental task. Currently, three vaccines have been approved for use in India—Covishield, Covaxin, and Sputnik V—and there simply aren’t enough doses to go around. But several more vaccines are in clinical trials in India, Kang said, and hopefully will be available by the end of 2021.

To fully vaccinate just the adults, “we need 1.9 billion doses,” Kang said. “Procurement has become complicated. Our supply is limited. This is our first adult immunization program and we are dealing with increasing vaccine hesitancy. So we really do have a long way to go.”

India’s crisis is a global crisis, and we need to be ready for the next one. In an increasingly connected world, viruses and mutations arising in one place can easily become a threat everywhere. Both researchers agreed that global disease surveillance networks are essential for preparing for the next pandemic.

“This moment has really taught us that our health is interconnected,” Mukherjee said. “The UK variant was causing a surge in Michigan. The Indian double mutant is in the UK. There is no escape. No one is safe until everyone safe.”

And there’s no guarantee that we will be able to develop vaccines so quickly next time, Kang said.

“I think we’ve actually been lucky this time, because this was a pandemic we could vaccinate our way out of,” Kang said. “I think just being prepared for how bad things can possibly get is something we need to think about. I know it requires investment. … But we have to figure out a way to do this.”