Mixing Science and Fiction in a Literary Novel

“The Revelations,” a fictional foray into the nature of consciousness, was shaped by author Erik Hoel’s career as a neuroscientist—and by “Moby Dick”

Kierk Suren, the protagonist in Erik Hoel’s new novel, The Revelations, is hellbent on coming up with an all-encompassing theory of consciousness, and it’s nearly his undoing.

Hoel, a research assistant professor working in the Allen Discovery Center at Tufts, knows the territory; he got his Ph.D. in neuroscience studying the integrated information theory of consciousness, and recently proposed a new theory for why humans dream.

As the book opens, Kierk is living out of his car in San Diego, having abruptly dropped out of a Ph.D. program in neuroscience in the Midwest. He spends his days scribbling theories in a notebook, muttering to himself, easy to mistake for someone who is losing his mind.

But a chance fellowship at New York University turns up, and jolts him into action. He travels across country, and is soon back on the hunt for that grand scientific theory of consciousness that has eluded him—and everyone else. His days are focused on the small group of young researchers he has joined and their work in neuroscience, including experiments done to primates in the name of science. Soon, one of the researchers dies—was it an accident, or murder?

“I like writing in settings that I’m familiar with, particularly because what I’m writing about is generally quite complex,” says Hoel, whose book was published by The Overlook Press in April. “I have a real need to get all the little details right—of scientific experimentation, how academia works, everything. So I draw from my own background to flesh out various characters, but it’s always filtered through some fictional lens.”

Listen to a conversation with Erik Hoel about what books influenced him growing up and in writing his first novel The Revelations.

Tufts Now: You’re a scientist—how did you come to write a novel?

Erik Hoel: I grew up in an independent bookstore that was owned by my mother, and I worked there as a teenager. I knew then that I wanted to be a writer.

I liked the old idea of going out and gaining some sort of real-world knowledge, and then writing through the lens of that. It was then that I discovered the world of science. I realized that what I hadn’t read—and what I wanted to read—was kind of the great scientific novel.

Are there parts of yourself in the any of the characters in The Revelations?

There’s definitely a part of me in all of the characters. I feel attached to pretty much all the characters who show up in the book at various points, with all their flaws and their humanness, many of which are my flaws and my humanness.

Why did you begin each chapter with a character waking up, usually “Kierk wakes up”?

It’s funny, when you write a novel, for some reason you have the urge to impose constraints on yourself. If you kind of hate yourself, then you’ll do things like write a novel without the letter “e”. 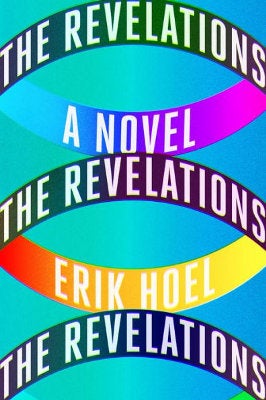 When a writer sits down and looks at the page, it is formless, endless, and empty. And so when you give yourself constraints, you’re beginning to construct a structure within that space. Suddenly things seem much more buildable and doable.

I wanted the wake-up scene to suck people into the daily life of this character, and make them feel like they’re traveling along closely with his consciousness.

Oh, absolutely. I generally have some sort of abstract theme and then I find characters that personify those themes. With Kierk, I needed a romantic force to combat rationalism.

The existential philosopher Søren Kierkegaard is a perfect example of kind of a poetic romanticism that lies behind a lot of human behavior. I think many of the very best scientists are definitely not rational in their behavior, so I wanted this character to have some of those traits.

Kierkegaard famously has a quote, “I need to find an idea for which I can live and die.” He’s talking about this monomania and the importance of ideas, which very much influenced this particular character. Kierk is almost a reincarnation of Kierkegaard.

What books influenced you as you wrote The Revelations?

Moby Dick, more than anything else. Melville’s language is utterly gorgeous. I read Moby Dick maybe five times during the writing of this book, just kept going back to it. I first read it when I was in my 20s—which is the appropriate time to read it, not when you’re in high school.

There are parallels. For Melville, it’s kind of a mad quest for a white whale, the search for meaning. And in The Revelations, it’s the search for this impossible theory of consciousness. In Moby Dick, there are huge swaths devoted to the details of whaling, how things are done. In The Revelations, there’s a lot about how science is done, how animal experimentation occurs, behind-the-scenes things.

A more direct relationship to something that I read growing up would be Umberto Eco’s The Name of the Rose. It contained a huge amount of nonfiction, and that was fascinating to me. And I thought, why don’t people write more books like this?

This is what I want, this level of detail and the expertise that lies behind it. I don’t think The Revelations would have anything like the structure that it does, including a murder or a possible murder, without my having read The Name of the Rose.

What are you reading now? Do you mostly read fiction or nonfiction?

I read both. Right now, I’m on the third of 11 volumes of Will and Ariel Durant’s The Story of Civilization. It’s an entire history of the world, and it’s been my goal to get through it before I die. It’s absolutely gorgeous. People just don’t write like that anymore.

For fiction, I’m reading Gone So Long, which is Andre Dubus III’s new novel. He’s just such a master—he builds books so well. He was my first and only writing teacher, when I was 13.

How did that happen?

He lived in the same town as I did. My mother ran the local bookstore, and knew him. He did a program for young writers at my mother’s urging—there were maybe eight or 10 of us in the class. It was basically a workshop, with him talking about writing and reading. He’s just an incredible teacher.

When you were growing up, were there writers who you admired and who inspired you?

I had writers that I loved and wanted to write as well as them—like Dow Mossman, who wrote The Stones of Summer. Another out-of-this-world, absolutely gorgeous writer is David Foster Wallace; I think his facility with pure on-the-page language remains unrivaled. Joan Didion also influenced me a great deal, particularly her essays.

I would also say Dan Simmons does not get enough credit for how good of a writer he is, and the different genres he wrote in. He wrote the sci-fi book Hyperion, which won the Hugo. He also wrote Summer of Night, a great horror novel, and Drood, which is about Charles Dickens’ unfinished novel; it’s better than the vast majority of historical fiction.

What’s next for you?

I’m working on a nonfiction book—it’s about consciousness. I have a contract, so I have a deadline. This is the first time I’ve ever written anything under a deadline.