Roger Gu, E20, is the first Jumbo to qualify for the competition 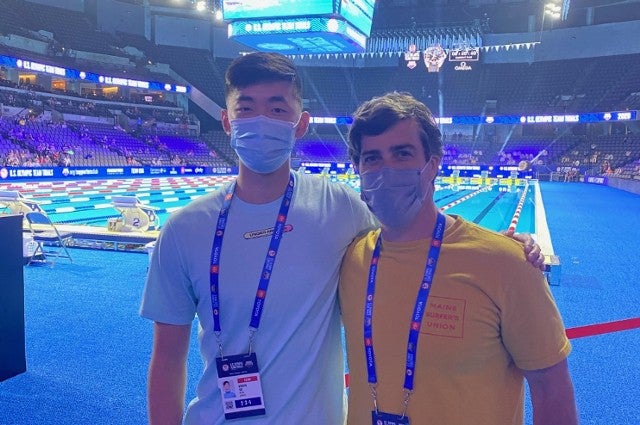 Capping an outstanding day at the U.S. Olympic swimming trials, Roger Gu, E20, won the B final in the 50-meter freestyle on June 7 with a time of 22.68 seconds. He is the first Jumbo ever to swim an Olympic trials.

In the preliminaries of the 50-meter freestyle (long-course meters) that morning, Gu had been one of 16 swimmers to advance to the evening finals with a time of 22.94 seconds, which tied for 10th place. That put him in the B final, where his 22.68 time edged Cam Peel (22.71) at the finish line.

Gu earned ninth place in the event overall, behind each of the eight swimmers who made the A final. However, his 22.68 mark was better than four of the contestants in the A final and stands as the fifth-fastest finish in the event.

A national champion at Tufts who graduated in 2020, Gu was one of 96 swimmers originally registered to compete in the event. He was seeded 69th with his 23.12 qualifying time from April 2019.

Watch Roger Gu win the 50-freestyle B final at the U.S. Olympic Trials (lane 5 from top).

Gu’s appearance at the U.S. Trials was quite an achievement for a swimmer from a Division III collegiate program. Only an estimated 15 Division III competitors are in Omaha for the trials.

At the 2019 NCAA Division III Championships in Greensboro, North Carolina, Gu won the 50 freestyle in a Tufts and NESCAC record time of 19.49 seconds. The NCAA competitions are timed over short-course yards, while all international meets are competed in long-course meters.

The competition was the last for Gu, at least for a while. As for what’s next, medical school is a good possibility, but he’s also seeking new challenges.

“I’m really happy with how it went, but more so just happy to be able to finish my swim career in such a fun way,” Gu said. “Going into this meet with such little training during the past year was definitely a cause for concern, but in the end, seeing all of the support from the Jumbo community really pushed me to perform and try my best. I definitely couldn’t have done it without my coaches and teammates and am forever grateful for them.” Tufts swimming head coach Adam Hoyt was with Gu in Omaha.

“I have no idea what’s next, but I’m definitely going to take some time off from swimming,” he said. “I’m looking to trying something new and get into that.”

Athletics Communications director Paul Sweeney can be reached at paul.sweeney@tufts.edu.