What Wildlife Cameras Tell Us About the Nation’s Mammals

Wildlife cameras have soared in popularity in recent years, offering the hunters, homeowners, scientists, and wildlife watchers who invest in them a look at mammals, birds, and sometimes even reptiles crossing their paths.

Chris Whittier, V97, a wildlife veterinarian and director of the Master’s in Conservation Medicine (MCM) program at Cummings School of Veterinary Medicine, has been operating wildlife cameras on the Grafton campus and at his home for several years. The cameras have gathered so much data that he and his MCM students often scramble to keep up with compiling and analyzing it.

Turns out, it was a common problem. There was a need for better software to harness the data generated from wildlife camera traps. So scientists from the Smithsonian Conservation Biology Institute and the North Carolina Museum of Natural Sciences developed a platform where people can upload their pictures and more easily compile their data.

“In the process, they also realized that there’s strength in numbers,” said Whittier. The data collected has contributed to the first-ever national mammal survey made up of more than 150 scientists using 1,509 motion-activated camera traps located across all 50 states. Called Snapshot USA, it’s an unprecedented partnership between scientists in every U.S. state to create a standardized way to monitor mammal populations at a national scale.

For two months in the fall of 2019, researchers collected more than 166,000 images of 83 different mammal species. The Snapshot USA survey results were recently published in Ecology, a publication of the Ecological Society of America, and the data is available online.

Whittier, who was one of the collaborators, with assistance from David Segal, VG19, submitted photos collected from about 10 of the cameras on Grafton’s 600-acre campus. All contributors had to adhere to the project’s parameters, which included spacing cameras a specific distance apart, using cameras of a certain quality, and situating them all in a defined habitat, such as suburban forest for the Grafton campus. 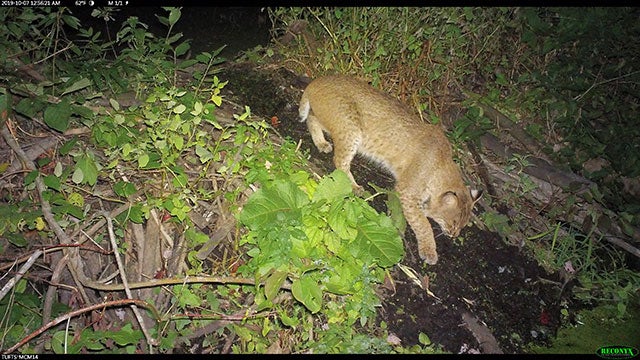 Nationwide, there were 352 detections of bobcats during the Snapshot USA survey. This photo was captured by a wildlife camera on the Grafton campus of Cummings School of Veterinary Medicine. Photo: Courtesy of Chris Whittier

“Some of our cameras are in random places in the forest, and we might see three animals in a week. Other cameras are in high-traffic spaces where we see 10 different animals per week and sometimes multiple per day. That's one of the other important criteria the survey looks at: where the animal diversity is, and where it isn't,” said Whittier.

White-tailed deer were the most common species detected with more than 34,000 sightings at 1,033 camera sites, followed by eastern gray squirrels and raccoons. The overall detection winner was the coyote, which was detected in all 49 continental states. Pygmy rabbits, mountain beavers, hog-nosed skunks, and marsh rabbits were among the least common mammals photographed.

“Our data set was reflective of the national picture in terms of the top three animals sighted,” Whittier said. “But the unique thing with our campus is that we saw more aquatic mammals than anywhere else that participated. Tufts had the most beavers, muskrats, and otters anywhere in the country, but also had high numbers of some more terrestrial species. For example, we were in the top five sites nationally for fishers and top ten for gray fox.” 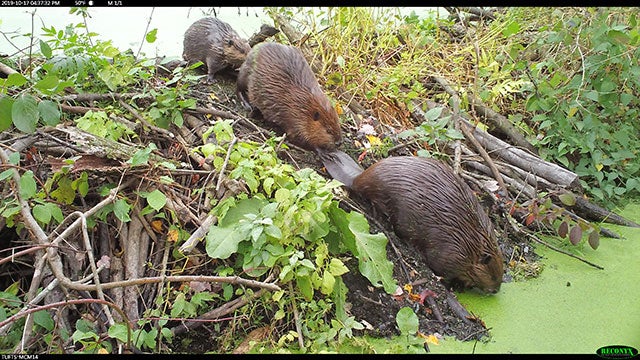 The Cummings School's 600-acre Grafton campus has an amazing aquatic ecosystem, thanks to the beavers like these. Photo: Courtesy of Chris Whittier

Cameras are triggered when they detect both movement and a difference in heat. Mammals and birds are warm enough compared to the environment that they have the heat signature to trigger the cameras. But turtles and most reptiles normally don’t trigger the camera because they’re generally the same temperature as their surroundings.

However, Whittier has observed that on a hot day, reptiles such as large turtles may trigger some cameras presumably because they are colder than their surroundings, and cameras detect this temperature difference. At least seven or eight times, big snapping turtles have triggered his cameras as they traveled out of cool ponds. Cameras in Florida and California caught many lizards on camera, but Tufts recorded the northern-most reptile in the Snapshot 2019 survey. 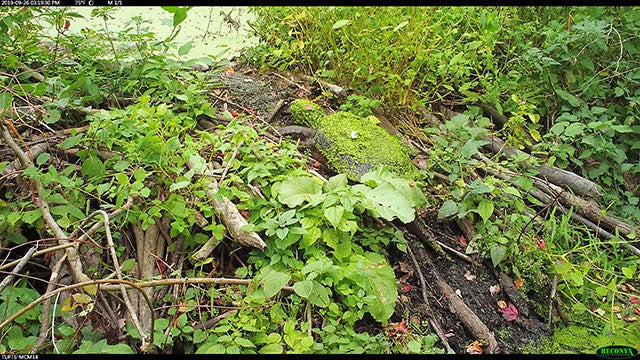 On a hot day, sometimes reptiles such as this large snapping turtle trigger Whittier's cameras, presumably because they are colder than their surroundings, and cameras detect this temperature difference. Photo: Courtesy of Chris Whittier

The Lure of Urban Areas

“Though it's relatively site-specific, there has been a phenomenon of more mammals in urban and suburban areas,” Whittier said. “It has a lot to do with how animals are good at making a living off human food and garbage. That food source attracts animals from the bottom of the food chain up to coyotes and foxes. Plus, white tail deer thrive in suburbia with few predators or hunters and plenty of food.”

The trend was noted even before the COVID-19 pandemic, during which many people were home more during the day due to quarantines and closures, and they had more opportunity to observe animals that may have been around prior. As gatherings and events were canceled, reported sightings of wildlife in yards, trails, recreational fields, and even streets increased. But there aren’t necessarily more animals, Whittier said. People are just seeing them more — it’s mostly an observational bias.

However, there’s a flip side. When the pandemic shuttered restaurants, urban-dwelling mammals — such as rats, mice, and raccoons — that might have been getting food from restaurant trash bins had to find another food source. As a result, some of them moved toward the suburbs in search of food. The Centers for Disease Control and Prevention issued a warning about this issue, saying some rodents could become “aggressive.” 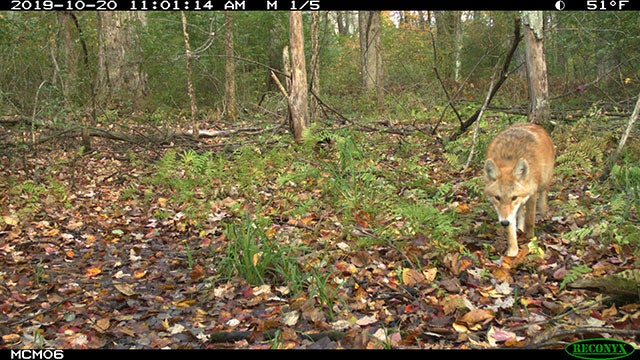 The most widespread mammal species was the coyote, which was detected in all 49 continental states. Photo: Courtesy of Chris Whittier

As a long-time user of wildlife cameras, also known as trail cameras, Whittier offered some suggestions for people who are interested in setting up a wildlife cam on their property.