How an Indie Folk Label Made It Big

In a new memoir, Rounder Records co-founder Bill Nowlin describes how the company with Tufts roots become a cultural force for American music

Bill Nowlin, A66, AG80, started making records in 1970 with Ken Irwin, A66, and Marian Leighton Levy, as a hobby grounded in shared ideals and a love of music. But the fast-growing audience for American folk and roots music soon catapulted their little independent company, Rounder Records, into the big time.

Emerging as a powerful force for preserving and advancing traditional American music, the Rounder catalog grew to more than 3,000 titles that spanned genres from folk, bluegrass, Cajun, international, and children’s music to reggae, blues, and music for social change, making it one of the most active and versatile independent record companies of the last century specializing in roots music. Along the way, contemporary artists inspired by those traditions were drawn to its orbit—including bluegrass-country singer Alison Krauss, banjo virtuoso Béla Fleck, blues group George Thorogood and the Destroyers, and jazz singer and songwriter Madeleine Peyroux. Rounder recording artists have won 56 Grammy Awards.

Nowlin chronicles that journey in his new memoir, Vinyl Ventures: My 50 Years at Rounder Records. 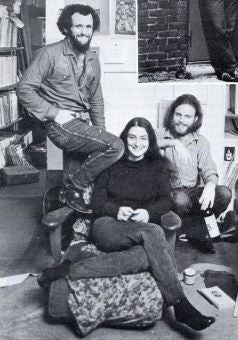 Rounder co-founders Ken Irwin, Marian Leighton Levy, and Bill Nowlin (left to right) launched the label in a Somerville apartment in 1970. Photo: Carl Fleischhauer
A career in the record industry was not part of his initial plan: After a master’s at the University of Chicago, he returned to Tufts for a Ph.D. in political science and taught at the University of Massachusetts-Lowell for more than a decade while also launching Rounder. He has written or edited more than 100 books, most about baseball (he’s a board member and former vice president of the Society for American Baseball Research). In his new volume, he takes a sweeping view of the company, from its backstories—he and Irwin were roommates their first year at Tufts—and onward through challenges of the 1990s, including economic trials that sank other ventures, right up to its sale in 2013 to Concord Music Group, now based in Nashville.

After Rounder’s sale, Nowlin, Irwin, and Leighton Levy stayed active as creative advisors, and today produce the occasional record released by the label. They had looked forward to events marking Rounder’s 50th birthday in October 2020 – only to cancel them due to the pandemic. With Vinyl Ventures, Nowlin, now 76, has marked the milestone anyway, and with astonishing detail. He recently spoke with Tufts Now from his Cambridge home.

Tufts Now: Vinyl Ventures is really impressive in scope and detail. How did you come to write it?
Bill Nowlin: I thought it would be particularly interesting to focus more on the beginning of the company, back in a Somerville apartment in 1970. I had access to all our file cabinets back in 2008, before we sold the company, and I had saved everything, going back to our first invoice. So there was no lack of material. And writing is what I do most of the time these days. I’ve been writing books for the past 24 years.

What do you want the reader to take away from the Rounder story?
What impresses me the most about what we did is how little we knew in starting out. None of us had business experience; we expected to have careers in academia. We started with two albums in 1970 and thought we’d put out maybe two or three a year, but the demand kept pushing us forward. That, and a lot of help from people who liked what we were doing.

What I hope people get out of this is encouragement. That if you have an idea, try to pursue it. You'll maybe run into obstacles, you might not be as lucky as we were at times, but we had some obstacles too along the way. And it's just there was a passion that we had, and determination. We certainly weren't afraid of work, and so we would put in 18 hours a day, 16 hours a day. In the beginning, we'd go down to the basement and pack boxes for an hour to work up an appetite for breakfast.

I’d tell others, if there's something that you want to do, go for it. But I would also say, be cautious too. Just don't dive off the deep end and assume that you're going to succeed, because you probably won't. We were very cautious. We had no money to start with, we had $1,000, that was it. And we just built it bit by bit, took our time.

Is it safe to say that the spirit of Rounder got started during your Tufts days? You and Ken heard some phenomenal music that was part of the folk revival in Cambridge and Boston.

I’d say two or three nights a week on average we were riding the bus from Medford Square to Club 47 (now Club Passim) in Harvard Square.

You talk a lot about your work with Rounder as a passion—how you weren't in it for the money, but wanted to change the world for the better by helping to preserve American traditions. Why was that important?

We always knew we were building something that had value and meaning in that cultural context. In my case, I was always attuned to history. I moved to Lexington [Massachusetts] just before I was 6, and because of the American Revolution, arguably, beginning there, history's just always been a big part of the town. From the time I was 14, I was giving tours of the Battle Green; as I say in the book, I always identified with the farmers who gathered there to take a stand against the British. Marian was a history major, as well, and Ken's father was a writer and his mother was an activist in the peace movement. We all, one way or another, were formed in ways where we looked at ourselves as part of a bigger picture, as part of a continuum.

I think It’s also really important that our mission took strength from the fact there were three of us; if there were two people, there would likely have been more tension and less flexibility. We were symbiotic in that we fed off each other and helped each other. We had a tolerance for each other in that we saw the big picture; if someone really, really felt strongly about something, we’d say okay, go ahead. We were putting out 50 albums a year, with modest financial expectations, and so, if in the end, one or two didn’t sell as well as hoped, it wouldn’t hurt us.  And it turns out we each had different talents in building our body of work.

You found a good new good home for Rounder in Concord Music Group, another independent label that shared similar values and artists; Rounder albums today can all be found online. How do you describe the Rounder legacy?

We weren't at the very forefront of the bluegrass revival, but we were right behind it. I guess you could say we came along at the right time. And I know that we helped other companies that came along after us. The record that we put out in 1975 by J.D. Crowe & the New South is considered one of the classic bluegrass albums of all time. It’s fulfilling to look back on good work that has lasting meaning and value. But big picture – I can share what I wrote in the book: We built a legacy out of love for the music. I think we’ve endured because we respect and appreciate the cultural importance of music.

Over your lifetime you’ve seen dramatic changes in how we listen to music. The first two LPs you bought as a child, Lloyd Price’s Mr. Personality and Ray Charles’s What’d I Say, are now available on YouTube. What’s your perspective on the digital streaming environment for music?

I bought those two LPs after hearing them on the local Top 40 radio station – the radio was where it started. if you liked something you heard, you went out and bought the record and played it at home, in my case, over and over. When we started Rounder, there was nothing but 12-inch vinyl. Then there were audio cassettes, eight-track tapes, and then the compact disc, and now digital streaming. That’s five different carriers of music over the Rounder lifespan. As for the internet, we probably have gained more than we have lost, just because there's so much that you can access. I’m all for it. I put together a Spotify playlist for Rounder's 50th anniversary, and I just put together a playlist of more than 2,500 Rounder banjo tracks; it runs for more than five days.

What music are you listening to these days?
I could listen to a lot of music, with Spotify, but I forget to most of the time, as I am so busy with research and writing about baseball. I don't listen to mainstream radio. I do listen to Hillbilly at Harvard every Saturday morning. That’s the one musical constant that I have these days, when we can’t go to concerts in person. They're just playing prerecorded shows, but I still listen and enjoy. The music is timeless.

Learn more about the Rounder story in a 2005 Tufts Magazine interview with Ken Irwin and Bill Nowlin.