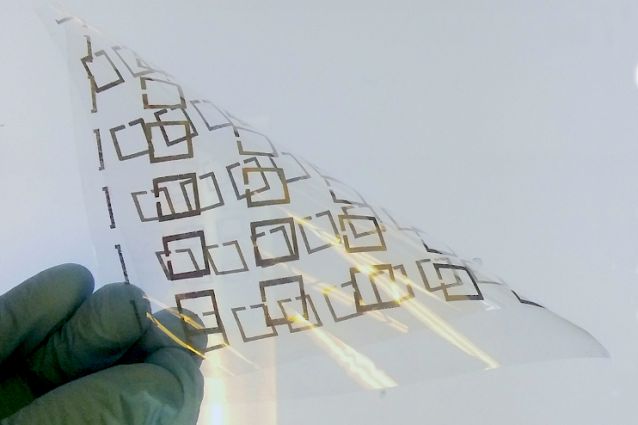 Engineers at Tufts University have developed new methods to more efficiently fabricate materials that behave in unusual ways when interacting with microwave energy, with potential implications for telecommunications, GPS, radar, mobile devices, and medical devices. Known as metamaterials, they are sometimes referred to as “impossible materials” because they could, in theory, bend energy around objects to make them appear invisible, concentrate the transmission of energy into focused beams, or have chameleon like abilities to reconfigure their absorption or transmission of different frequency ranges.

The innovation, described today in Nature Electronics, constructs the metamaterials using low-cost inkjet printing, making the method widely accessible and scalable while also providing benefits such as the ability to be applied to large conformable surfaces or interface with a biological environment. It is also the first demonstration that organic polymers can be used to electrically “tune” the properties of the metamaterials.

Electromagnetic metamaterials and meta-surfaces – their two-dimensional counterparts – are composite structures that interact with electromagnetic waves in peculiar ways. The materials are composed of tiny structures – smaller than the wavelengths of the energy they influence – carefully arranged in repeating patterns. The ordered structures display unique wave interaction capabilities that enable the design of unconventional mirrors, lenses and filters able to either block, enhance, reflect, transmit, or bend waves beyond the possibilities offered by conventional materials.

The Tufts engineers fabricated their metamaterials by using conducting polymers as a substrate, then inkjet printing specific patterns of electrodes to create microwave resonators. Resonators are important components used in communications devices that can help filter select frequencies of energy that are either absorbed or transmitted. The printed devices can be electrically tuned to adjust the range of frequencies that the modulators can filter.

Metamaterial devices operating in the microwave spectrum could have widespread applications to telecommunications, GPS, radar, and mobile devices, where metamaterials can significantly boost their signal sensitivity and transmission power. The metamaterials produced in the study could also be applied to medical device communications because the biocompatible nature of the thin film organic polymer could enable the incorporation of enzyme-coupled sensors, while its inherent flexibility could permit devices to be fashioned into conformable surfaces appropriate for use on or in the body.

“We demonstrated the ability to electrically tune the properties of meta-surfaces and meta-devices operating in the microwave region of the electromagnetic spectrum,” said Fiorenzo Omenetto, Frank C. Doble Professor of Engineering at Tufts University School of Engineering, director of the Tufts Silklab where the materials were created, and corresponding author of the study. “Our work represents a promising step compared to current meta-device technologies, which largely depend on complex and costly materials and fabrication processes.”

The tuning strategy developed by the research team relies entirely on thin-film materials that can be processed and deposited through mass-scalable techniques, such as printing and coating, on a variety of substrates. The ability to tune the electrical properties of the substrate polymers enabled the authors to operate the devices within a much wider range of microwave energies and up to higher frequencies (5 GHz) than was assumed to be possible with conventional non-meta materials (<0.1GHz).

Development of metamaterials for visible light, which has nanometer scale wavelength, is still in its early stages due to the technical challenges of making tiny arrays of substructures at that scale, but metamaterials for microwave energy, which has centimeter-scale wavelengths, are more amenable to the resolution of common fabrication methods. The authors suggest that the fabrication method they describe using inkjet printing and other forms of deposition on thin film conducting polymers could begin to test the limits of metamaterials operating at higher frequencies of the electromagnetic spectrum.
“This research is, potentially, only the beginning,” said Giorgio Bonacchini former post-doctoral fellow in Omenetto’s lab, now at Stanford University, and first author of the study. “Hopefully, our proof-of-concept device will encourage further explorations of how organic electronic materials and devices can be successfully used in reconfigurable metamaterials and meta-surfaces across the entire electromagnetic spectrum.”