Using fundamental calculations of molecular interactions, they created a catalyst with 100% selectivity in producing propylene, a key precursor to plastics and fabric manufacturing 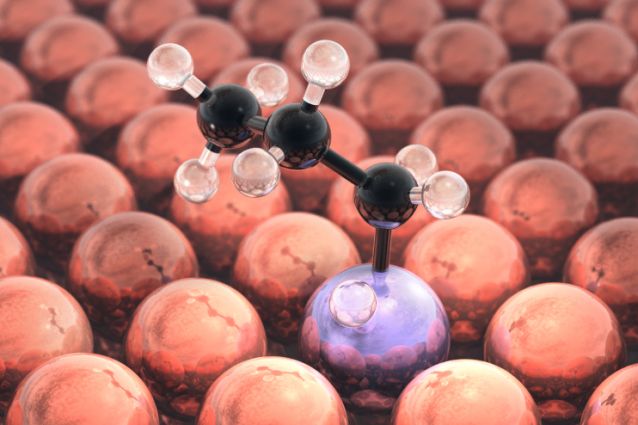 Researchers at Tufts University, University College London (UCL), Cambridge University and University of California at Santa Barbara have demonstrated that a catalyst can indeed be an agent of change. In a study published today in Science, they used quantum chemical simulations run on supercomputers to predict a new catalyst architecture as well as its interactions with certain chemicals, and demonstrated in practice its ability to produce propylene – currently in short supply – which is critically needed in the manufacture of plastics, fabrics and other chemicals. The improvements have potential for highly efficient, “greener” chemistry with a lower carbon footprint.

The demand for propylene is about 100 million metric tons per year (worth about $200 billion), and there is simply not enough available at this time to meet surging demand. Next to sulfuric acid and ethylene, its production involves the third largest conversion process in the chemical industry by scale. The most common method for producing propylene and ethylene is steam cracking, which has a yield limited to 85% and is one of the most energy intensive processes in the chemical industry. The traditional feedstocks for producing propylene are by-products from oil and gas operations, but the shift to shale gas has limited its production.

Typical catalysts used in the production of propylene from propane found in shale gas are made up of combinations of metals that can have a random, complex structure at the atomic level. The reactive atoms are usually clustered together in many different ways making it difficult to design new catalysts for reactions, based on fundamental calculations on how the chemicals might interact with the catalytic surface.

By contrast, single-atom alloy catalysts, discovered at Tufts University and first reported in Science in 2012, disperse single reactive metal atoms in a more inert catalyst surface, at a density of about 1 reactive atom to 100 inert atoms. This enables a well-defined interaction between a single catalytic atom and the chemical being processed without being compounded by extraneous interactions with other reactive metals nearby. Reactions catalyzed by single-atom alloys tend to be clean and efficient, and, as demonstrated in the current study, they are now predictable by theorical methods.

“We took a new approach to the problem by using first principles calculations run on supercomputers with our collaborators at University College London and Cambridge University, which enabled us to predict what the best catalyst would be for converting propane into propylene,” said Charles Sykes, the John Wade Professor in the Department of Chemistry at Tufts University and corresponding author of the study.

These calculations which led to predictions of reactivity on the catalyst surface were confirmed by atomic-scale imaging and reactions run on model catalysts. The researchers then synthesized single-atom alloy nanoparticle catalysts and tested them under industrially relevant conditions. In this particular application, rhodium (Rh) atoms dispersed on a copper (Cu) surface worked best to dehydrogenate propane to make propylene.

“Improvement of commonly used heterogeneous catalysts has mostly been a trial-and-error process,” said Michail Stamatakis, associate professor of chemical engineering at UCL and co-corresponding author of the study. “The single-atom catalysts allow us to calculate from first principles how molecules and atoms interact with each other at the catalytic surface, thereby predicting reaction outcomes. In this case, we predicted rhodium would be very effective at pulling hydrogens off molecules like methane and propane – a prediction that ran counter to common wisdom but nevertheless turned out to be incredibly successful when put into practice. We now have a new method for the rational design of catalysts.”

The single atom Rh catalyst was highly efficient, with 100% selective production of the product propylene, compared to 90% for current industrial propylene production catalysts, where selectivity refers to the proportion of reactions at the surface that leads to the desired product. “That level of efficiency could lead to large cost savings and millions of tons of carbon dioxide not being emitted into the atmosphere if it’s adopted by industry,” said Sykes.

Not only are the single atom alloy catalysts more efficient, but they also tend to run reactions under milder conditions and lower temperatures and thus require less energy to run than conventional catalysts. They can be cheaper to produce, requiring only a small fraction of precious metals like platinum or rhodium, which can be very expensive. For example, the price of rhodium is currently around $22,000 per ounce, while copper, which comprises 99% of the catalyst, costs just 30 cents an ounce. The new rhodium/copper single-atom alloy catalysts are also resistant to coking – a ubiquitous problem in industrial catalytic reactions in which high carbon content intermediates -- basically, soot -- build up on the surface of the catalyst and begin inhibiting the desired reactions. These improvements are a recipe for “greener” chemistry with a lower carbon footprint.

“This work further demonstrates the great potential of single-atom alloy catalysts for addressing inefficiencies in the catalyst industry, which in turn has very large economic and environmental payoffs,” said Sykes.