Three Tufts University School of Medicine faculty members in the vanguard of efforts to combat Lyme disease, cancers caused by the human papilloma virus (HPV), and disparities in Black maternal health are the inaugural recipients of donor-funded professorships that will support continued discovery while also honoring those for whom the professorships are named.

Ndidiamaka Amutah-Onukagha, associate professor and assistant dean for diversity, equity, and inclusion in the Department of Public Health and Community Medicine, is the Julia A. Okoro Professor in Black Maternal Health; Linden Hu, vice dean for research at the school and a professor of molecular biology and microbiology, is the Paul and Elaine Chervinsky Professor in Immunology; and Karl Munger, chair of the Department of Developmental, Molecular and Chemical Biology, is the Dorothy Todd Bishop Research Professor. 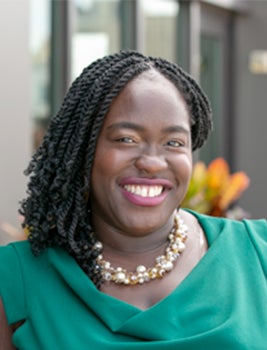 Ndidiamaka Amutah-Onukagha. Photo: Courtesy of Amutah-Onukagha
Black women in the United States are three times as likely as non-Hispanic white women to die from pregnancy-related complications—regardless of age, income, or education level—and about 60% of those deaths are preventable. Ndidiamaka Amutah-Onukagha is one of only six principal investigators in the United States awarded NIH funding to investigate racial disparities in pregnancy-related complications and deaths. She plans and hosts a yearly Black Maternal Health conference aimed at increasing awareness of the inequities that place Black women at increased risk of maternal mortality and morbidity; it’s among the largest such conferences on this public health crisis. She is also the founder and principal investigator of the Maternal Outcomes for Translational Health Equity Research (MOTHER) Lab, which brings together graduate and postdoctoral researchers, graduate students, and undergraduates in collaboration. Her long-standing commitment to public health also embraces reproductive justice, infant mortality, and HIV/AIDS as experienced by Black women.

Amutah-Onukagha serves on the board of directors for the National Women’s Health Network and is a commissioner on Massachusetts’ new Racial Inequities in Maternal Health steering committee. She received her Ph.D. in maternal and child health from the University of Maryland School of Public Health and completed a Kellogg Health Scholars postdoctoral fellowship. She was an assistant professor in public health at New Jersey’s Montclair State University before coming to Tufts.

Her professorship, named after her maternal grandmother, who was a birth attendant, or midwife, in Nigeria, was established anonymously by two donors to support Black maternal health research. Amutah-Onukagha said the professorship is “the professional culmination of my personal passion and life that is steeped in maternal health and health equity.” She hopes that the scholarship it supports at Tufts “will serve as a national example of how to do this work with a community-engaged lens of equity and transparency.” 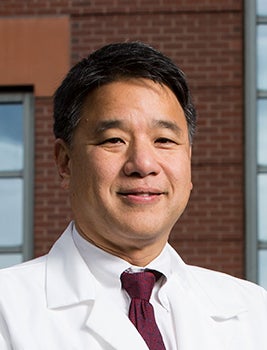 Linden Hu. Photo: Anna Miller
Lyme disease is one of the fastest-spreading infectious diseases in the United States. Linden Hu studies the host-pathogen interactions induced by Borrelia burgdorferi, the most common bacterium causing the disease. Spanning both applied and basic immunology, his laboratory has worked on the development of Lyme vaccines for humans and animals while unraveling the mechanisms by which the immune system recognizes and then builds tolerance to B. burgdorferi, and how the breakdown of these processes can lead to prolonged patient symptoms. He is co-director of the Tufts Lyme Disease Initiative, which brings together experts from across the university with the goal of eliminating the illness as a growing human threat by 2030. The professorship represents a “vote of confidence from the school and the university,” said Hu. “The security it provides gives me the freedom to take on riskier projects that may take longer to develop but could have a bigger payoff.”

His scholarship has already led to more than 20 grants from the National Institutes of Health (NIH) totaling more than $35 million, and he has served on multiple NIH study sections and advisory boards. Hu’s ability to inspire the next generation of Jumbos has garnered multiple teaching awards from students at the School of Medicine. He earned his M.D. from Brown University and completed an internal medicine residency at St. Elizabeth’s Medical Center in Boston and an infectious diseases fellowship at Tufts Medical Center. 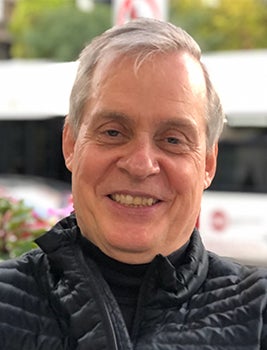 Karl Munger. Photo: Ursula A. Germann
HPV infections cause about 5% of human cancers, including almost all cervical cancers and a large proportion of anogenital and oral cancers. Karl Munger is working to unravel how HPV infections contribute to cancer. He has identified the cancer-causing genes encoded by the virus and uncovered important mechanisms by which HPV infections drive cancer initiation and progression. His work has led to the identification of vulnerabilities of HPV-infected cells that may be harnessed therapeutically and also yielded insights into general principles of human carcinogenesis. Support from the NIH has helped Munger to contribute more than 180 publications to the HPV field, but he cautions that shrinking federal dollars for innovative basic biomedical research has reached a critical threshold, with only one in eight grant applications submitted to the National Cancer Institute receiving funding.

“Philanthropic support is key to keep innovation going,” he said. The professorship will enable him to explore new areas of research, collect preliminary data necessary to pursue grants, and catalyze new collaborations with Tufts, Wellforce, and international colleagues.

Munger has served on multiple NIH study sections and advisory panels and is an elected member of the American Academy of Microbiology. He earned his Ph.D. from the University of Zurich and performed postdoctoral research at the National Cancer Institute in Bethesda, Maryland. He started his independent research career as an assistant professor at Harvard Medical School, where he later became a professor before moving his research group to Tufts in 2014.

Munger’s professorship was established through an estate gift from Stephen L. Bishop, EG70, to support a faculty member who conducts clinical and/or basic science research designed to encourage development of treatments for malignant diseases such as cancer. It honors the excellent care Bishop’s late wife, Dorothy, received from School of Medicine faculty member and hematologist Jane Desforges, M45.