“Hello, my name is Dana. I’m calling because my dog died a few days ago, and I'm devastated. His name was Dax, he was 16 years old, and he was my best friend. I don’t know what to do. I wanted to talk to someone who might have some words of wisdom to get through this. Can you help me?”

For 25 years, the Pet Loss Support Hotline at Cummings School of Veterinary Medicine has answered calls like this from grieving pet owners in need of emotional support as they cope with the loss of their beloved companions.

Emily McCobb, V00, VG02, a clinical associate professor of anesthesiology and Co-Section Head of the Community Medicine Program, was a student at Cummings School when the hotline was developed and started in 1996 by Tamara Pierce, V97. Shortly after it began, McCobb served a term as student leader.

Cummings School’s Pet Loss Support Hotline is one of the remaining few of its kind in the country. Over the years, many veterinary schools with similar hotlines phased them out for a variety of reasons, not the least of which being that people just don’t use the telephone as much as they used to. But when McCobb suggested to her veterinary students that they might follow suit, they told her it was too important a resource.

“It's an amazing opportunity for students to practice their communication skills,” said McCobb. “It gives students a window into the experience of losing a pet from the client's side, which informs their empathy and their views when they go into a veterinary practice.”

Alicia Karas, V89, a veterinary anesthesiologist and animal welfare scientist, was a resident at Cummings School when the Pet Loss Hotline launched, and she took on the role of faculty mentor in 2015. She pointed out that most veterinary students have to wait until their third-year clinical rotations to start interacting with clients, but students can choose to take Pet Loss Hotline as an elective as early as their first year at Cummings School.

“It allows students to practice talking to a client in a situation where they may be nervous,” said Karas, who added that students go through an orientation and training with her and other faculty members, including Eric Richman, MSW, LICSW, a clinical social worker at Cummings Veterinary Medical Center, who teaches a course for first-year students on grief and loss and is featured in the video below about coping with the loss of a pet.

During the training, they walk through different calls or scenarios they might encounter, and they talk about sensitive and complicated topics such as euthanasia. They also participate in monthly briefing sessions where students discuss their calls with other volunteers and faculty members, and they discuss the importance of self-care, as being in a support-providing role sometimes can result in compassion fatigue.

“It's important for students to do their own loss inventory because they have to be somewhat aware of what triggers them, how they deal with loss, or how their family of origin has dealt with loss,” said Richman. “I think some first-year students find it a little bit uncomfortable, but it’s about getting comfortable talking with people who are very vulnerable and dealing with tremendous sadness.” 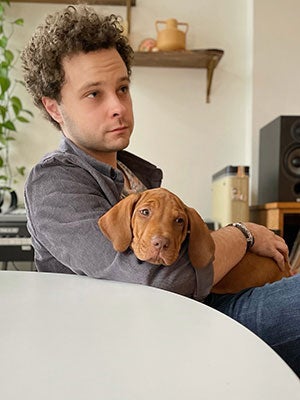 Jake Johnson, A19, V24, said he volunteers with the Pet Loss Hotline for the opportunity to talk to callers about their pets. Photo: Courtesy of Jake Johnson
Richman said the students are not trained therapists or grief counselors, and they’re very clear about that when they speak with callers. They are simply veterinary students with a great deal of empathy who just want to help people.

Jake Johnson, A19, V24, is a first-year veterinary student who applied to Cummings School of Veterinary Medicine during his sophomore year as part of Cummings’ Early Acceptance Program. He said the opportunity to talk to clients about their pets is why he started volunteering with the hotline.

“A lot of veterinarians go into veterinary medicine because they love animals, not necessarily because they love humans. For me, it was just a little different,” said Johnson. “I like the doctor-client interaction related to the pet, and that's why I've been drawn to the Pet Loss Hotline.”

Sarah Frommer, V22, volunteered for support hotlines during her undergraduate years and wanted to continue in veterinary school because she found the work to be rewarding. She said she felt drawn to Tufts when she found out about the Pet Loss Support Hotline.

“Talking to people on the hotline and hearing their experience with veterinary medicine from the perspective of a grieving pet owner is a side of the human experience that I will never get in any other capacity,” said Frommer, who has been part of the Pet Loss Hotline for the past four years. “The hotline is an invaluable service for both for the student and the grieving pet owner.”

Common Threads Among the Calls

Callers often say they feel like they can't talk about their grief with people in their lives because the loss of a pet is often disenfranchised grief, or a loss that’s not recognized as serious or legitimate by other people in their lives. Callers may have been on the receiving end of comments such as, ‘it's only a cat, or ‘just get another dog,’ from people who did not understand their grief. 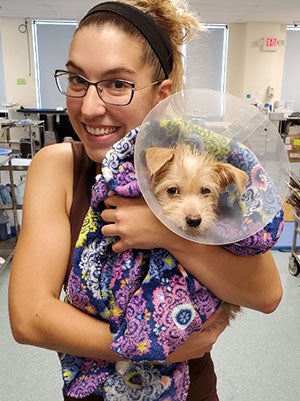 “The hotline is an invaluable service for both for the student and the grieving pet owner," said Sarah Frommer, V22, pictured above with her dog. Photo: Courtesy of Sarah Frommer
“There's no question that veterinary students understand the potential bond between a pet and their human family members,” said Karas, “and probably every student has had an experience with losing a pet.”

Frommer said that nearly all the callers she speaks with feel “mild to severe guilt” about some aspect of their loss. “People either feel guilty that they gave up too soon and didn't give their pet a chance, or they feel guilty that they didn't do something sooner and prolonged their pet’s suffering,” she said.

She and the other students tell the callers that it’s important to take time to grieve, memorialize, and feel sad. And going through that process may help them reconcile their feelings of guilt.

“It all gets very personal, very quickly,” said Johnson, who added that many callers have questions about euthanasia, ranging from how to know when it’s the right time to how to cope with the mourning process afterward. He said in some cases, the caller has not yet lost their pet, but they are preparing for the loss because their pet’s health is declining. And in other cases, days or weeks have passed since a pet has died, but the caller is having difficulty dealing with their grief.

“People usually start off just talking about their pets, and they’re willing to be more vulnerable because they’re not in person,” said Johnson. “The onus is on us to make them feel loved, or make them feel normal, or just connect with people, which is what we're going to have to do in the field once we're veterinarians.”

A Rise in Calls Amid COVID-19 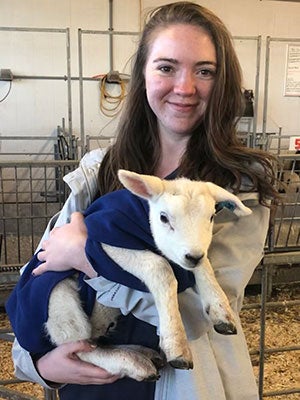 Meaghan Hanlon, V22, was one of the veterinary students credited with sustaining the Pet Loss Hotline during the COVID-19 pandemic. Photo: Courtesy of Meaghan Hanlon
Isolation is another common theme among pet owners who call the hotline, and the COVID-19 pandemic exacerbated the problem over the past 18 months. People who lost their animal companions may not have been able to rely on typical support systems, such as visiting with loved ones, due to COVID-19 restrictions. Some callers reported that spending so much time at home during quarantines only further highlighted their pet’s absence.

Over the years, veterinary students have put in the hard work to keep the Pet Loss Support Hotline going — especially during the pandemic, when call volume doubled, according to McCobb, who was filling in as faculty advisor at the time. She credited several students, including Johnson, Frommer, and Meaghan Hanlon, V22, with figuring out how to turn the hotline into a remote operation and sustain it during an incredibly difficult year.

“People were so grateful for the service, even when I didn't know the right thing to say, or even if they just needed someone to listen to them,” said Hanlon, who joined the hotline during her first year at Cummings School and previously served as the hotline’s student coordinator. “It felt very special to me to be able to provide that in their time of need.”