A Creative Haven for Budding Artists

Ever since he was a boy in Haiti, Karl Eilsee has loved making art. When he immigrated to the United States in 2017, he was inspired by YouTubers who made realistic digital paintings, and with an iPad bought with money from a summer job, taught himself to do the same.

But it wasn’t until joining City Studio, a free program for Boston high school students at the School of the Museum of Fine Arts at Tufts University, that he had the chance to work in acrylic and oil.

One of his paintings, which he made just after submitting his college applications, shows a hallway alight with color but partially shrouded in shadows. The meaning? “Nobody knows the future,” he said.

Eilsee has glimpsed it, though: He was recently accepted at the Massachusetts College of Art and Design, where he plans to go in the fall with the goal of becoming a graphic designer. 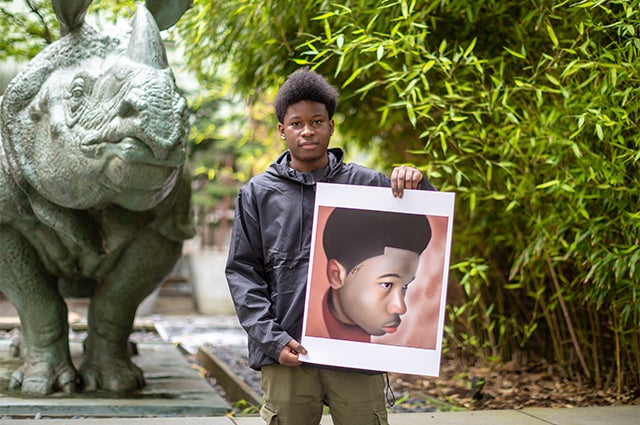 Karl Eilsee with a digital self-portrait. He will attend MassArt in the fall. Photo: Jenna Schad

Since 2016, City Studio has given Boston teenagers who are passionate about art access to studios, equipment, and the working artists who are faculty of SMFA at Tufts. Meeting on Saturday afternoons during the school year, they learn everything from drawing and painting to printmaking, sculpture, photography, and digital art.

They also get expert guidance on putting together a portfolio from John “Jack” Neylan, AG14, City Studio’s head instructor. Three of his students applied to MassArt this year and all were accepted.

Neylan calls Eilsee one of his most dedicated students. Before the pandemic, when workshops were in-person, Eilsee would show up for City Studio an hour early—or sometimes two—and often stay late.

“He already had those raw skills and raw talent,” Neylan said. City Studio’s contribution “was giving him access to materials and exposure to contemporary artists, and then providing a critical lens, and basically allowing him to understand that the rules of the art world are meant to be bent, broken, or challenged—except the rule that you have to work really hard.” 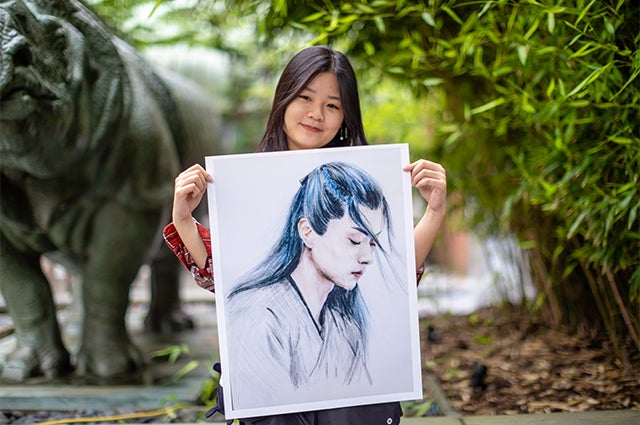 City Studio works closely with art teachers at Boston schools to identify students who would benefit from SMFA at Tufts resources and one-on-one attention, things a typical high school art department might not have the budget or time to provide. The program takes about 15 students each year, and is hoping to expand.

Neylan and Caleb Davis, administrative director for SMFA at Tufts, designed the curriculum to be like an abbreviated version of the first year at art school, with a multidisciplinary feel. Neylan might ask the students to take a drawing they have done and turn it into a carving for a woodblock print, then add it to an animation program, “letting all of those mediums and disciplines kind of talk to them,” he said.

When the pandemic hit, City Studio didn’t hesitate to go remote, with Neylan adapting his teaching to Zoom. “He was here every Saturday, even when our cameras were off, teaching us about what he knows,” Eilsee said. 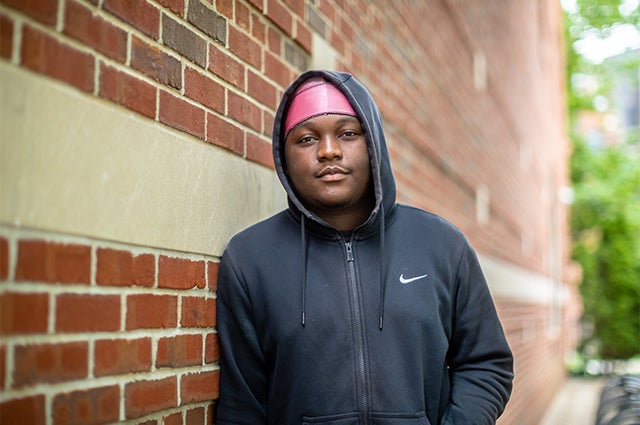 While at City Studio, Yvensky Adelphin learned to experiment with his usual style. “You end up seeing something way different,” he said. Photo: Jenna Schad 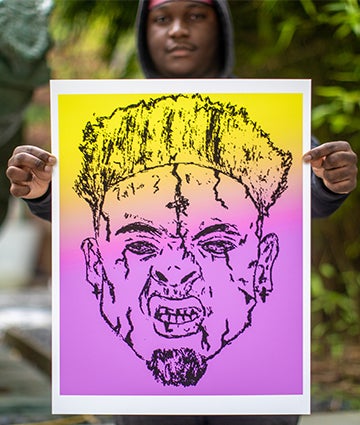 Adelphin shows one of his creations. Photo: Jenna Schad

Neylan and Davis handed out supplies of canvases, paper, brushes, India ink, collage materials, acrylic paints, and watercolors for the students to use at home. Neylan let the students know they could use the materials however they wished; he didn’t blink when one of his students used up all his high-quality mixed media paper for sketches. “I would rather have him fill the pad,” Neylan said.

City Studio is looking forward to bringing the students back to the SMFA at Tufts facilities. “The building has a lot of importance to me,” said Neylan, who earned his MFA in 2014. “It’s a safe space to make art and be creative. For the high school students, just being able to work next to undergrads and grads from all different types of backgrounds, seeing the interesting things that they’re making—it sounds cliche, but it inspires them.”

Inspiration also comes from the artists whose works they study, said Davis.

“Jack is aware of what’s going on, and he gives amazing current references of young artists for them to look at,” he said.

Neylan introduces students to the comic book and pulp-fiction allusions in Trenton Doyle Hancock’s work, the abstract landscapes of Julie Mehretu, Glenn Ligon’s explorations of race and sexuality, and the collaged paintings of Mark Bradford, who examines subjects such as police brutality and migrant communities. Neylan also invites artists to give guest lectures and share their behind-the-scenes creation processes with the students. 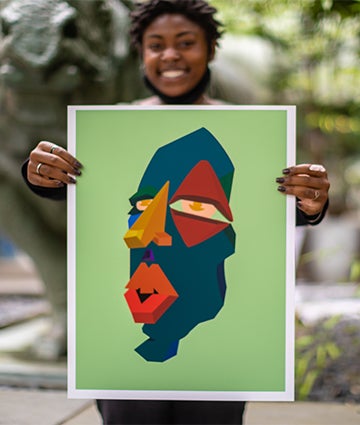 Artiana Brown has sophisticated ideas that come “fully formed right out of her head,” said her instructor. Photo: Jenna Schad

Eilsee said he admires artists as diverse as Leonardo Da Vinci and street artist Jean Michel Basquiat, who, he pointed out, was also of Haitian decent.

Pop culture influences like anime, manga, music videos, and album covers are common. At an outdoor end-of-year City Studio party in June, Artiana Brown, a rising senior at TechBoston Academy, showed a photo that inspired her, a portrait of the singer/songwriter Shamir with an orange on his head.

She also shared her interpretation. The colors in her version, a digital painting, were bold and saturated, and like many of the faces she depicts in her work, the features were exaggerated—she is fond, gapped teeth and hooded eyes. “I changed it,” she explained unnecessarily. “It doesn’t look like the same person.”

“I like the weird,” she added. “The weird is prettier.”

Brown came to City Studio already a prolific artist, Neylan said, with sophisticated ideas that come “fully formed right out of her head.” All the students arrive with reserves of natural talent; often his job is to prod them to experiment.

Yvensky Adelphin, who usually works in black and white, remembers balking when Neylan suggested he try adding color to one of his drawings. “At first I was like, it’s perfect the way it is,” he said. “But after you try out what he tells you to do, you end up seeing something way different.”

Adelphin wasn’t sure what he wanted to do after graduating high school this year: he was interested in art school but also flight school. Neylan helped him look into both, even calling a flight school to find out about costs and financial aid opportunities. In the end, Adelphin opted for MassArt. 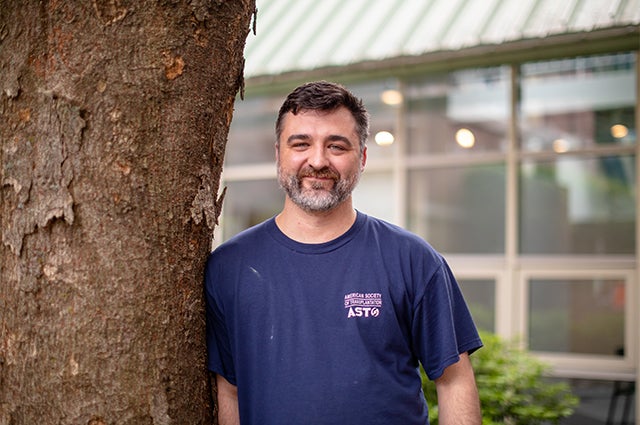 Jack Neylan, AG14, head instructor at City Studio, helps students who want to apply to art school, but also talks frankly about the amount of work and even luck that go into being an artist. Photo: Jenna Schad

But it’s not all about getting into art school. “We would never think of directing students into something that wasn’t a passion for them,” Davis said. “That doesn’t mean they can’t continue to make art for the rest of their lives. And these skills stay with them forever.”

Vy Le, who moved to Boston from Vietnam in 2016, said that City Studio has brought her drawing to another level. “I think it’s improved me a lot,” she said, in part because Neylan cared so much about helping her expand her skills.

Le, who just graduated high school, was accepted at several colleges, including MassArt, but decided to attend Simmons University and ultimately pursue dentistry. “Drawing is what makes me happy,” she said, which is why she wants to keep it something she does in her free time.

For those students who see art as their potential profession, Neylan helps them with their portfolios, their applications, and their recommendations. He keeps a running list of scholarship programs. But he also talks frankly about the amount of work and even luck that go into being an artist. “You should just know that kind of stuff,” he said.

Eilsee said his family wonders about the practicality of an art degree, but they love his art and want to see him do good things with it.

“If I’m not a professional graphic designer, I could be an art teacher. I’ve got options,” he said. Even looking down the long hall of the future, he said, “I’m not scared.”