Kate Bayard Honored as National Coach of the Year

Following a season in which she led the Tufts women’s tennis team to the NCAA Final Four, Kate Bayard has been named the Wilson/Intercollegiate Tennis Association (ITA) National Coach of the Year for Division III.

Bayard’s Jumbo teams have achieved great success on and off the court throughout her 16 years leading the Jumbos. But this year was special. Despite the challenges presented by the COVID-19 pandemic, which included the relocation of their home facility to help the university manage the pandemic, Bayard had her team ready to play its best tennis once the season finally began in early April.

“I feel lucky every day to love what I do and to have the opportunity to work with such amazing student-athletes and coaches,” Bayard said. “I am proud of our growth throughout the year, and I’m thrilled that we were able to take away positive memories from this season that will stay with us in the years ahead.”

A 7-2 win at Middlebury College on April 11—the program’s first victory over the Panthers since 2011—was an early indication of things to come. Bayard guided the Jumbos to wins in all six of their regular-season matches, leading to the team’s first-ever appearance in the NESCAC championship match.

After earning an at-large berth into the NCAA championships—the team’s 14th NCAA berth under Bayard—the team won an NCAA regional at Johns Hopkins to advance to the national quarterfinals for just the second time in program history. 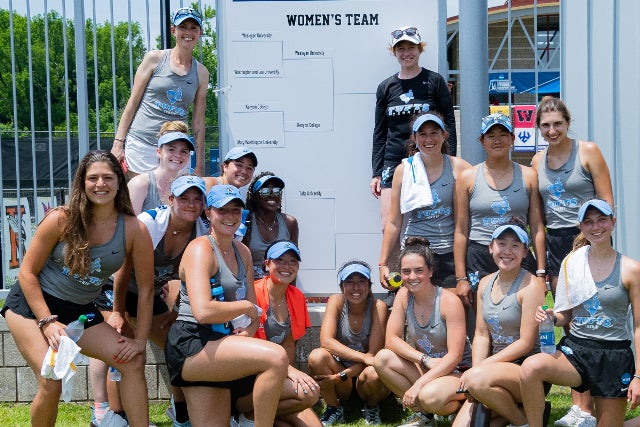 Kate Bayard and the women’s tennis team at the NCAA championships in Chattanooga in May. “I am so appreciative of those at Tufts, the NESCAC, the ITA, and the NCAA who played a role in making this special 2021 season a reality for our team,” Bayard said. Photo: Jacob Dye/ITA
Competing in Chattanooga that week, the Jumbos posted a 5-1 NCAA Elite Eight win over host Sewanee to give Tufts its first-ever NCAA Final Four berth. They fell 5-2 to eventual national champion Emory University. Tufts finished with a 9-2 record and was ranked No. 3 in the nation.

Jumbos Maggie Dorr, A22, Caroline Garrido, A22, and Tilly Rigby, E23, also played in the NCAA individual championships and were eventually recognized as All-Americans. Rigby reached the quarterfinals of the NCAA singles tournament before falling to the eventual champion. She finished ranked No. 5 nationally.

Bayard’s team also continued to display the highest level of sportsmanship as well. Patricia Obeid, A22, became the seventh of Bayard’s players to earn NESCAC’s Senior Sportswoman of the Year honor. Also among the six NESCAC All-Conference honors earned by the Jumbos in 2021 was Bayard’s fourth Coach of the Year recognition.

The Jumbos achieved all of this while continuing to thrive academically and be supportive in the community. The team’s 3.65 cumulative grade point average was one of the best in Tufts’ Athletics Department, and seven of Bayard’s players earned Academic All-NESCAC status (3.50 GPA+). The program’s long-standing reputation for community service excellence included work with the Friends of Jaclyn organization and Tufts’ Leonard Carmichael Society, among others, this season.

“The women’s tennis Jumbos had their most successful year ever during the most challenging year ever,” said Director of Athletics John Morris. “I am sure Kate will deflect the credit for the Wilson ITA National Coach of the Year award to the very talented student-athletes on her team. They are such an impressive group, and the results they delivered this year were remarkable. But it was a true team effort, and Kate’s leadership was key to making those results possible.”

Director of Athletics Communications Paul Sweeney can be reached at paul.sweeney@tufts.edu.