Can We Learn from Afghanistan’s Collapse?

The U.S. mission there was vague and relied too heavily on military might, a Fletcher School professor argues

The fall of Afghanistan’s American-backed government to the insurgent Taliban this week, nearly 20 years after the U.S. first sent troops to the country, raises questions about the U.S.-led nation-building experiment there, which cost $83 billion and more than 2,400 American lives.

When U.S. forces entered Afghanistan in late 2001, their goal was to punish the Taliban for supporting al-Qaeda’s use of Afghanistan to train the fighters who attacked the United States on 9/11. But U.S. troops ended up staying, even though their mission wasn’t entirely clear, says Monica Duffy Toft, a professor of international politics and director of the Center for Strategic Studies at The Fletcher School.

“Strategy and thinking in the longer term were missing in Afghanistan,” says Toft. “We thought we could rebuild Afghanistan as a democracy, which would then stop exporting opium and radicalized fighters, but our leaders never considered that ‘Afghanistan’ was largely an imagined state, a place more accurately described as a collection of diverse peoples—in particular the Pashto, who do not recognize a hard border between Afghanistan and Pakistan—with narrow, not national, loyalties.”

The rapid collapse of the government in Afghanistan in recent days caught U.S. leaders by surprise and led to chaotic scenes of Afghans trying to flee. The U.S. had been in the process of withdrawing forces from the country.

“This marks yet another in a long line of wrenching tragedies for the Afghan population, particularly women and children,” says Toft. “The Afghans who allied with the United States now find their lives and livelihood threatened.”

Will the U.S. learn any lessons from Afghanistan? It can, she says, but first we have to understand what went wrong.

Tufts Now: How did the United States get so enmeshed in Afghanistan in the first place?

Pakistan then suffered the loss of its traditional role of power broker, and chafed over the money and influence it lost after the flow of bribes shifted to a collection of Afghan warlords, who rebranded themselves as Afghan nationalists. 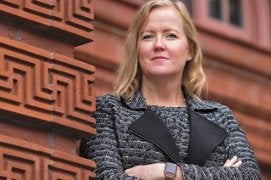 “What I hope to see in terms of learnings—trying to be optimistic—is that the United States really stresses diplomacy, intelligence, and economics.” Photo: Anna Miller

Pakistan’s response was brilliant realpolitik: first, secure the Taliban leadership against the U.S., then nurture them to prepare for a return to the status quo—no action of Pakistan being more emblematic of this strategy than the safe haven granted Osama Bin Laden.

Much criticism has been leveled at the Bush administration for shifting resources to an un-needed assault on Iraq before ‘the job was done’ in Afghanistan (Iraq was its own massive blunder), but to be clear: there was never a chance that with a permanent safe haven in Pakistan, the Taliban wouldn’t eventually be able to return, as they have.

The fight in Afghanistan then became a classic holding action, with only negative goals achieved. Prevent the territory being used as terror training habitat? Yes. Prevent the discrimination in employment, education, and offices of Afghan women? Yes. Slow the growth of opium and its transport and sale? Partially. Create an Afghan military capable of defending U.S. and allied interests and providing a safe haven for democracy? No.

None of these negative objectives make for good optics, and they certainly don’t justify—in most American minds—the fantastic expenditures of lives and cash.

Many of our political and military elites understood the complexity of the situation—but understandably failed to fully acknowledge its implications.

We are now in our fourth presidential administration dealing with this war. Until now, no administration was willing to take the responsibility for what ended up being a horrible miscalculation in expanding the U.S. mission following the successful routing of the Taliban and getting bin Laden.

We have a very strong military—why couldn’t we win the war there?

The American way of war is that we typically kill to win. Since killing for its own sake is pretty unpopular, we have to find a villain with minions who we can use to justify the killing—and seriously, this is often the easy part.

Think of Saddam Hussein, or Hafez al-Assad, or Osama bin Laden. Then we throw lots of firepower at the problem, some of which kills civilians but most of which dramatically destroys the villain and his minions.

Then what? Americans are apt to fantasize that with the evil villain gone, the natural goodness of the people will rise up and establish a peaceful, prosperous democracy that shares our values and interests.

There are two distinct problems with this. First, since World War II, the U.S. military has increasingly been directed against people who fear some things more than death. Killing doesn’t work well here. Second, ‘collateral damage’ makes two new enemies for every old enemy we kill.

Have U.S. policymakers learned anything from this?

Secretary of State Antony Blinken said this is not a Saigon moment for Biden, but it really does look like it. I’m not confident we’ve learned any lessons, because I do see similarities with the situation in Vietnam—where we didn’t appreciate and accept that the Vietnamese were a formidable opponent and that American force might not get them to yield.

In Afghanistan, we were trying to build a ‘mini-me’ military that could only work if that military was loyal to the Afghan nation. It never was. Afghans are loyal above all to family, tribe, valley, and clan. “Afghanistan” means nothing to most of them, so when a real chance of being killed by the Taliban came to pass, they simply packed up their weapons and headed home. Capability to fight? 100%. Willingness to fight for “Afghanistan”? Zero.

It has cost huge amounts of money, of course, and also American blood. It’s just a tragedy all around. This is a huge tragedy for the Afghan population, particularly women and children. The Afghans who allied with the United States now find their lives and livelihood threatened.

How did the Taliban move so quickly to take over the country—and couldn’t we have foreseen that?

The Taliban likely would have gone around to the different provincial governors and struck deals, saying there wouldn’t be bloodshed if those areas gave up without a fight. I don’t have concrete evidence of this, but watching how they operate, and seeing other civil wars, this is probably what happened. There is evidence that there was large-scale desertion from the Afghan army happening beforehand, too, but U.S. intelligence wasn’t aware of it.

Part of that lack of knowledge is due to who our Afghan allies were—the elite. They’re Western-educated, working in the government and institutional settings similar to the West that we can relate to, but they didn’t necessarily have the pulse of the population, the people on the ground.

In addition, and sadly, many understood that the coalition cash cow would one day dry up, and took precautions to leave with their cash once things got dangerous. Some may have been caught by the speed of the Afghan army collapse, but many are safely abroad with their cash in numbered Swiss accounts.

The U.S. has not had many foreign policy successes in the greater Middle East in the last four decades. Why is that, and what could be done to improve our efforts there?

We don’t have a strategy. Instead, we have an image of Americans liberating Paris, being pelted with flowers and showered with kisses after kicking the Nazis out.

We’ve also suffered from a tendency to see Israel as an ideal ally and to view potential partners in the Middle East through Israel’s lens. This means we tend to view Arabs—and after 1979, Persians—as threatening, and as I said earlier, we tend to respond to threats with killing power—and too much of it.

But in a region of the world where many consider that their honor or their faith matter as much as their lives—or more—a credible threat to kill just isn’t enough to achieve any positive outcome on its own. There’s still an important role for armed force to play, but for the United States to advance its interests in the Middle East, it needs the whole orchestra, not just the brass section.

There’s this acronym about the elements of national power called DIME—diplomacy, intelligence, military, and economic—and we’ve really overemphasized military. What I hope to see in terms of learnings—trying to be optimistic—is that the United States really stresses diplomacy, intelligence, and economics. We’ve overemphasized the balance on the military side, and really underemphasized diplomacy. I hope to see a recalibration of our foreign policy tools with diplomacy taking center stage, followed by intelligence.