This is a story of a dog with an enormous tongue and the veterinary surgeon who performed a ground-breaking surgery to help him.

Raymond Kudej is a professor and small animal surgeon at Cummings School of Veterinary Medicine who often works with brachycephalic — or short-headed — dog breeds, such as bulldogs, pugs, and Boston terriers. The shape of their heads makes these breeds prone to breathing and other upper airway problems.

A few years ago, he read a study published in the journal Veterinary Surgery in which veterinarians measured the volume of tongues in relation to the area of airways in 16 brachycephalic dogs. They found that the proportion of air to soft tissue in brachycephalic dogs was decreased by approximately 60 percent compared to dogs with a medium-sized skull.

“This paper was the first to objectively assess that the relative size of the tongue is becoming obstructive in these dogs, but it didn't talk about ways to make it smaller,” Kudej said. “My first thought was that a tongue reduction might work.” 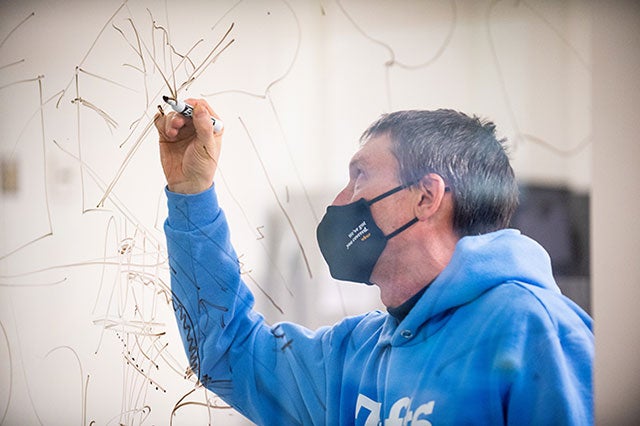 Veterinary surgeon Raymond Kudej is pictured leading rounds last year at the Foster Hospital for Small Animals at Cummings School of Veterinary Medicine. Photo: Alonso Nichols / Tufts University
There are different types of tongue reduction surgeries for humans, and Kudej launched a research study to explore the method he thought would be the most effective on a brachycephalic dog. He examined the safety and beneficial effects of the procedures on animal cadavers donated to the Henry & Lois Foster Hospital for Small Animals for teaching and research. That’s when a phone call came into the hospital from someone who needed help with a dog whose tongue was so big he could barely eat.

The caller was Maureen Salzillo, director of Operation Pawsibility Project, an animal rescue organization based in Rhode Island. She had recently rescued a year-old pit bull named Bentley who needed medical care. His tongue was so big that it hung out of his mouth all the time, and he took more than 30 minutes to eat just one bowl of food.

“Dogs are stoic,” she said. “He figured it out. To eat or drink, he had to plunge his whole face into the bowl, and it made such a mess. He couldn’t swallow the right way. And he drooled in such copious amounts, it took multiple towels to mop it up.” 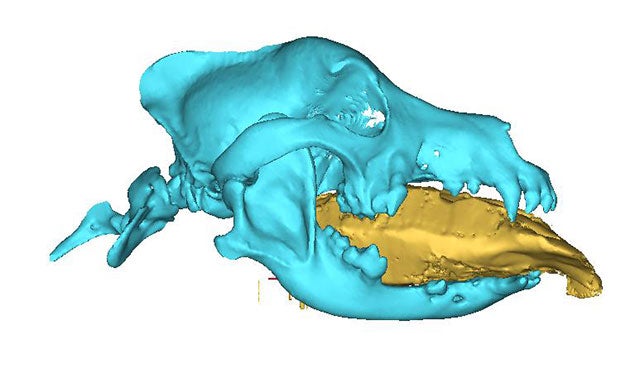 In this 3D reconstruction of Bentley's CT scan, the blue area is his skull and the yellow mass is his tongue. The scan shows Bentley's front lower teeth growing straight out to the front due to the weight of his tongue. Photo: Courtesy of Michael Karlin, assistant professor in small animal orthopedic surgery at Cummings School

Salzillo wanted Bentley to be more comfortable, and she took him to a few different veterinarians for help. One took a biopsy of Bentley’s tongue, but the results didn’t reveal any issues. Another suggested that Bentley was tongue-tied, a condition that limits tongue mobility and can be corrected with a surgical procedure. But Salzillo, an experienced dog owner, had a hunch that mobility wasn’t the issue.

“In the meantime, we changed Bentley’s food and put him on allergy medication because in addition to the tongue, his muzzle was so swollen,” she said. “We changed him to a specialty food for dogs with sensitive skin and allergies. It helped the muzzle problem, but it didn't help the tongue.”

When she called the Foster Hospital for Small Animals an appointment, she said she spoke with a liaison and thoroughly detailed Bentley’s medical history. The liaison forwarded her information to Kudej, who immediately called her back.

“That's where the sense of serendipity came in. I'm in the middle of this research, and here’s this dog with an enlarged tongue as a clinical case. It's such a rare thing,” Kudej said.

By November 2020, amid the COVID-19 pandemic, Salzillo brought Bentley for an examination at Tufts, where Kudej agreed the dog was not tongue-tied. He just had a humongous tongue. Bentley’s tongue was so heavy that the sheer weight of it pushing down on his teeth constantly caused them to grow sideways at a 90-degree angle. And his mandible, which is normally the shape of a small bowl that holds the tongue, was completely flat.

“The dog was suffering,” Kudej said. “There were ulcers on the surface of his tongue from trauma associated with it just being so big.” 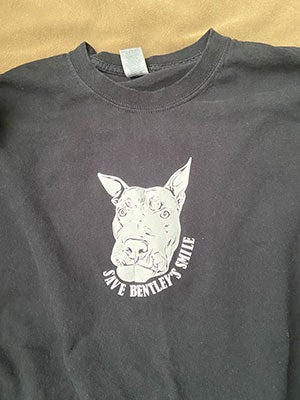 The animal shelter printed T-shirts with Bentley's face on them as part of a fund-raiser for his medical care. Photo: Courtesy of Maureen Salzillo
He told Salzillo that he had never done a tongue-reduction surgery on a patient, though he had practiced on the donated cadavers. Knowing the unprecedented nature of the procedure, she was willing to let Kudej go forward with it.

The surgery would be expensive, and the specialty dog food needed to keep Bentley’s allergies in check was also expensive, so Salzillo began fund-raising for Bentley’s medical costs. She printed up T-shirts that had Bentley’s face on them with the words, “Save Bentley’s Smile,” and sold them on her social media channels. By February 2021, the shelter raised most of the money needed for the operation.

An abnormally enlarged tongue is called macroglossia, and the surgery Kudej performed was a midline glossectomy, which reduces the size of the tongue by taking out tissue from the middle of the muscle as opposed to the sides, where arteries are located. Guided by a CT scan to avoid the arteries, Kudej was able to remove tissue from the center of the tongue to make it thinner and smaller.

At first, Kudej wasn’t sure if the surgery was successful. The first stage of healing is inflammation, so swelling was to be expected for the first few days. But after the third day, the swelling started to decrease, and after a week or so, Salzillo was able to take Bentley home with her to oversee his continued recovery. However, caring for a 75-pound sick dog is no easy task.

“Bentley couldn’t move his tongue in and out because the muscle of his tongue was still healing. He couldn’t get his food down, so I made little meatballs out of his wet food, got him to open his mouth, and tossed them into the back of his mouth,” she said.

Eventually, Bentley made a full recovery and is doing incredibly well. Salzillo said his quality of life has improved dramatically, and he’s like a different dog now, though he continues to eat a specialized diet to keep his allergies in check. He even found a forever home with a loving family.

“Bentley is doing amazing,” the family said in a statement. “He is able to eat and drink much better. With his energy and attitude, he is like a puppy again. We are so grateful to Dr. Kudej and his team at Tufts for helping our boy live a better quality of life.”

It may have been the first canine tongue reduction surgery ever performed on a live patient. Kudej could not find such a surgery described anywhere in veterinary literature, though he acknowledges it’s possible that the surgery was performed but not documented.

In October, Kudej will present his research into tongue-reduction surgeries on brachycephalic dogs and include Bentley’s clinical case at the 2021 American College of Veterinary Surgeons conference. In addition, an abstract of an upcoming paper will be published in Veterinary Surgery with lead author Valeria Colberg, a veterinary surgery intern who worked with Kudej on the research study.

“Bentley’s case of macroglossia is one that I've never seen before, and I'll probably never see again,” said Kudej. “I don't believe in fate, but sometimes the stars just line up.”