Welcoming the Tufts Class of 2025

Diversity reaches all-time high with the new undergraduates and transfers

The new undergraduate Class of 2025 may have just arrived, but they have already earned a place in Tufts history—three times over.

The Jumbos are the largest incoming class to enroll at Tufts, with 1,807 first-year students and 40 transfers. The class also holds the distinction of being the most ethnically and racially diverse first-year class on record, with 48.4% of U.S. students identifying as people of color, up from 44.7% last year.

And it is the first class enrolled under the university’s SAT/ACT test-optional policy, in place for two more admissions cycles. Forty-five percent of those enrolling at Tufts this fall applied without submitting ACT or SAT results.

JT Duck, dean of admissions and enrollment management, said the class’s size and composition “reflects a commitment to making our admission process accessible to more students from more backgrounds and to a holistic, contextual review of each application. Our yield on offers of admission was higher than anticipated—Tufts continues to be a highly sought out destination for higher education by academically accomplished and personally compelling students from around the world.”

Watch a video of advice for members of the Class of 2025. Video: Jenna Schad

University leaders virtually welcomed the Class of 2025 and transfer students into the Tufts community at matriculation on September 2. The greeting was originally planned to bring students together on the Quad, but when remnants of Hurricane Ida were predicted to bring heavy rain and flooding, the event was streamed live.

President Anthony P. Monaco in his remarks warmly welcomed students and congratulated them on their fortitude as they navigated college admissions while faced with the “evolving challenges presented by the global pandemic,” he said.

Now, Monaco said, they are ready for Tufts. “If anything, this past year and a half has tested your resilience, flexibility, determination, and compassion, all skills you need to thrive here at Tufts,” he said. “All of you are here today because in you we see the curious minds, compassionate hearts, and commitment to action that we prize in our students and alumni. . . . That’s why we asked you to join us here at Tufts. And we intend to provide an education that honors those qualities, that expands your horizons and prepares you for the challenges of tomorrow.” 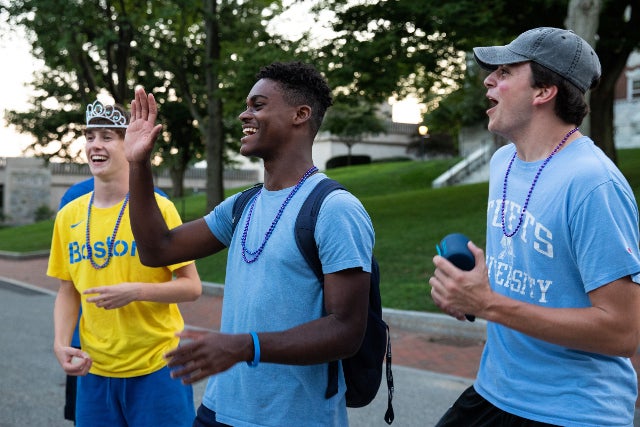 From left, Liam Castrucci, A25, Langston Harris, A25, and pre-orientation leader Matt Shea, A22, share a laugh during the Jumbo Amazing Race during FIT Pre-Orientation program on August 31. Photo: Anna Miller
Duck also acknowledged how the pandemic underscored the importance of supportive relationships—a theme he noted that ran through admissions essays—and he urged students continue to build strong connections.

“While you’re here on our campus together, make connections with the people that make up this diverse community,” he said. “Find the people you instantly gel with and get to know the people you think might be nothing like you. Celebrate one another, take a risk, and say hi to the person that intrigues you. Push each other to be better and to do better and never lose sight of the magic each of you brings to this community.”

He told the students that every one of them “has earned your seat here at Tufts—for your academic accomplishments and potential, and for your collaborative orientation, your civic and community engagement—and the unique voice you bring to this community. And you did so from the largest and the most competitive application pool we have every received. Congratulations. Tufts is a better place because you are here.”

The class is made up of 1,807 first-year students. Tufts is also enrolling 40 transfer students, which includes four students enrolled in the Resumed Education for Adult Learners (REAL) program.

Women account for 55 percent of enrollment and men 43 percent. Students who identify as genderqueer, non-binary, or who prefer not to specify a gender identity, represent 2 percent.