On the morning of Sept. 11, 2001, Meron Langsner, AG11, overslept “a little,” as he recalls in his autobiographical one-act play, Bystander 9/11. As he rode the subway to his job in New York’s financial district, the play’s Narrator acknowledges with the breezy confidence of youth, “OK, so I was late for work again.”

But as he exited the train under the World Trade Center, any notion of routine was shattered. Rushing through the turnstile was a “screaming mass of people headed right at you. But that was only the beginning.”

A plane had just crashed into one of the towers above.

Langsner made a possibly life-saving decision to board an uptown train, getting off a few blocks away. As he joined panicked crowds streaming north, he began to grasp what was happening: Terrorists had slammed two planes into the World Trade Center's twin towers as part of a series of attacks that killed nearly 3,000 people.

Before the month was out, Langsner would shape the anguish of that day into Bystander 9/11—A Theater Piece Concerning the Events of September 11, 2001. The play features the Narrator encountering various characters called simply “New Yorkers,” who act as a kind of Greek chorus. The action takes place after the attacks, as the Narrator and other characters join throngs fleeing the chaos, walking 50 blocks, or about 2.5 miles, to shelter in place at New York University. 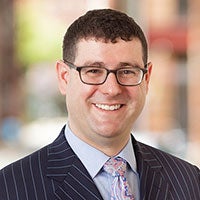 There, the Narrator tries to reach friends by email and phone. Later, the characters recall their impressions of the aftermath (“There were already pictures of the missing hanging in every public place”) and how, on the evening of September 14, they joined relief crews with the Red Cross to deliver gallons of fresh coffee to Ground Zero workers.

The play, though written in a rush of emotion, has endured as a way to commemorate and honor the victims of 9/11 and memorialize the day’s events. Since its first public reading in May 2002 at the New Phoenix Theater in the Park in Buffalo, New York, it has been performed by high school and college students and community theater groups around the world, including at Tufts in 2004 and 2007. This year, on the 20th anniversary of 9/11, five performances have been licensed for the anniversary itself, with two more set for November, in locales as varied as a Boston suburb, a community college in Kansas, and high schools in North Carolina and Nevada.

“Bystander 9/11 offers a way to look at this tragic event through the eyes of those who were there,” Langsner said, “and that gives the audience an opportunity to connect with it; it helps them to feel, to reflect, and to process for themselves what it means to really remember 9/11.”

Langsner, who has a doctorate in theater history from Tufts, wrote Bystander 9/11 at the suggestion of a friend, a theater director who was in rabbinical school at the time of the attacks. His friend thought a play would help “because so much was going on and yet few really understood what was going on,” he recalled. “So I just wrote everything down and then started trying to figure out how to process it.”

The resulting “docudrama” can unfold in under an hour with a cast of as few as three actors, and has minimal, visceral stage directions. It opens with the Narrator and the Chorus standing on stage holding lit candles as the audience enters; after all are seated, the actors blow out the candles and take their own seats. In the opening line, the Narrator sets the scene: “This is just one person’s story. Individual experiences get lost in the spectacle and the chaos of the towers coming down. This thing happened to me on my way to work back then.”

Sometimes Bystander 9/11 is produced with more than three actors or runs longer if accompanied by media projections. Whatever a theater director chooses to do, the play bears witness as it also offers a way to sanctify the memories of those who died and to navigate one’s own complex emotions and thoughts. This year its profile was raised even more by being distributed by YouthPLAYS, a leading publisher of educational theater.

“I’ve been told that Bystander 9/11 is a healing experience, and I do think that as a means of helping a society heal, there are few better mediums than theater,” said Langsner, who is a vice president at a real estate firm in New York City. Also a stage fight choreographer and author of other plays, he keeps his hand in theater as creator of the audio drama podcast Slippery Slope, a contributor to The Theatre Times, and a writer working on several full-length plays and plans for a scholarly book. “Theater is communal: it takes place in real time with real people experiencing the same thing together.”

That immediacy makes plays like Bystander "capsules of cultural memory," said Thomas Fish, AG10, an assistant professor in the Department of Theatre & Performance Studies at Kennisaw State University. As a graduate student at Tufts, Fish produced Bystander 9/11 as a staged reading.

The direct, often raw, first-person narration and the experience of being surrounded by a supportive audience helps theatregoers explore challenging depths they might not otherwise, he said.

Storytellers like Langsner “remind me of the traditional role of the griot in West African cultural tradition. They function as human access points to our past,” Fish said. “We need members of our communities committed to keeping historical stories alive … not only to remember, but also to reshape our values today.”

Donna Wresinski, fine and performing arts director for Framingham (Massachusetts) Public Schools, is directing a September 11 performance at a local venue with community members as actors. The play will be followed by a panel discussion that includes speakers from the police and fire departments and an interfaith organization.

“Opening up a dialogue is part of our 9/11 commemoration, and theater does that all by itself,” Wresinski said. “Theater sends you out the door thinking and talking about what you saw. It makes you start processing things that you didn't even know you had to process.”

Halfway across the United States, Trevor Belt, theater instructor at Allen Community College in Iola, Kansas, chose the play so his students could “really examine the events of the day, as all of them were not born until after 9/11/01.”

The Narrator’s interactions with other New Yorkers, as well as Langsner’s articulate description of the events of the day, make the play accessible to readers and audiences today, Belt said. “Meron also makes it clear that his play can be performed by anyone, of any race, creed, ethnicity, or background, and while opening it up to everyone, he still deals with concepts of prejudice and racism associated with the attacks,” he said. “It’s a play that fantastically rides the line between being for everyone, while also being a young man's account.”

Robin Clayton, a teacher at Eugene Ashley High School in Wilmington, North Carolina, selected Bystander 9/11 for her honors theater class; they will present it at a one-act play festival in November. She happened upon the play first in the Methuen Anthology of Testimonial Plays and “fell in love with it,” she said. “The themes are definitely timeless and universal—strangers uniting, the power of shared experiences, loss and hope. It’s intense without being over the top. It’s real, and gritty, but still high school appropriate. I like how human it is—both light and dark.”

Staging the play for high schoolers, she hopes, reaches the sensibilities of her student on multiple levels, she added. “We are analyzing both the form and the play itself and they are going to create their own documentary theater pieces,” she said. “It’s important for their generation to understand what happened. They didn’t live through it, but they have lived their whole lives in its shadow.”

When Langsner wrote Bystander 9/11, he already had a master’s degree in performance studies from NYU’s Tisch School of the Arts. He was considering a career in finance, but after 9/11 he had a change of heart and submitted Bystander 9/11 as part of his application to Brandeis, where he earned an MFA in playwriting. He would go on to be selected for the pilot year of the National New Play Network Emerging Playwrights Residencies.

His nonstop versatility as a playwright has continued unabated. He has been a regular contributor to the Gi60 International One-Minute Play Festival since 2005, with his work being performed at Brooklyn College and in various venues in England. He also contributed three plays to the anthology section of the Gi60 book: One Minute Plays: A Practical Guide to Tiny Theatre, published by Routledge.

Other plays range from dark comedies and experimental pieces (see them all at the National New Play Network) to another docudrama, Over Here. Set in New York City in the summer of 2002, that play frames a growing friendship between an Israeli immigrant and a Palestinian-American put into crisis by prejudices and events overseas. “That was also a way of processing 9/11,” said Langsner.

It was another abiding love—theater history—that led him to earn a doctorate at Tufts, where he literally “defended” his dissertation with a katana, the sword used by samurai in feudal Japan. Building on his extensive training in fencing (he was a Junior Olympic qualifier in sabre and epee) and the martial arts (he holds a black belt in karate), he has become a noted stage choreographer, choreographing stage fights for more than 175 productions.

The play he wrote to make sense of the traumatic experience of 9/11 continues to serve schools and communities. They turn to it as a powerful teaching moment, and as a way to bring people together.

Wresinski said it helps her teach a new generation about what happened that day, which has particular resonance in Framingham. Seven employees of the company TJX, which is based there, flew out of Boston for a business trip that day and died after their plane was hijacked and deliberately crashed into one of the towers in New York. “For me, it's not possible to let this go by without helping to educate the kids and to bring the community together, to do a remembrance that is thoughtful,” she said.

For Belt, the play has helped students see 9/11 as more than “an item in a history book.” He added, “Meron's play paints a detailed picture of what many were going through that day. And because of that, my students are gaining a more nuanced and human understanding of what happened.”

As for Langsner, what has surprised him—and what is most gratifying—is how the play has reached audiences around the world and struck a human chord.

“I learned that a school in New Zealand used it for one of their classes,” he said. “And one thing that I did not foresee was that it was, for them, an exercise in empathy. On this 20th anniversary, and as we move forward, if the play becomes a way for people to exercise empathy and experience history, then I'd say that I've made a contribution I can be happy with.”

The Psychological Fallout of 9/11

The Way Forward in Afghanistan