Casey, who led the nationally known baseball program for almost four decades, made high standards on and off the field the foundation for success

To call John Casey, A80, AG83, a college baseball coach is akin to saying Everest is a mountain.

“When you look at Tufts baseball and you look at John Casey, you can’t separate the two,” said Matt Lyman, E96, EG99, who both played and coached for the retiring Casey. “He built the Tufts baseball family, and he also built an amazing reputation as a leader and a coach who is known across the country.”

The Jumbos’ six New England Small College Athletic Conference (NESCAC) titles are the most ever won by any team in the league. He’s a member of the halls of fame of the American Baseball Coaches Association (ABCA), the New England Intercollegiate Baseball Association, and the Boston Park League.

The impressive stats and accolades go on and on, but those who played for and worked with Casey say they reveal only part of the tremendous legacy he’ll leave when he retires this year.

“John Casey has devoted more than 40 years to Tufts as a distinguished baseball and football student-athlete, highly successful coach, respected leader, and most importantly, as a teacher and mentor for generations of Jumbo student-athletes,” said Director of Athletics John Morris. “His impact on Tufts athletics will be felt forever.”

Tufts baseball was far from a national powerhouse when Casey took the helm. “We were a regional program,” said Assistant Coach Bob Clarke, who’s been with Tufts baseball for most of the past 35 years, longer than any other member of the staff.

Casey had a larger vision. While fully embracing the Division III model of the scholar-athlete, from the beginning he ran the program with the focus of a Division I team. That included intensive organization and planning, engaging alumni, recruiting hard, and taking care of the grounds.

“We put in a lot of time and effort as coaches to make sure this was one of the best-run programs in the country,” said Lyman. “In the early days, we didn’t win every game, but everyone always played hard for Coach Casey. Now both he and the Tufts baseball program are nationally known.” 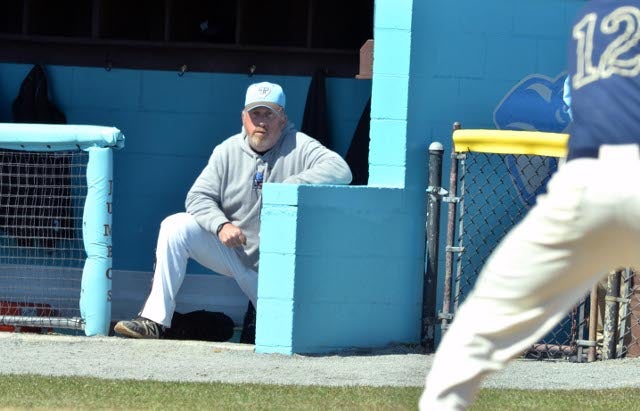 John Casey’s career “is a remarkable success because of how much the Tufts players love their program and love their coach,” said Matt Noone. “Alumni are unbelievably loyal and proud to have played for Coach Casey. That is the ultimate sign of success, way above wins and losses.” Photo: SportsPix

For all his intensity, Casey was no micromanager. “He let his coaches coach,” said Clarke.

One of the things that makes him great is his eagerness to listen and learn, said Matt Noone, who is going on 20 years as head baseball coach at Babson College and reveres Casey as a mentor and friend.

Early in his career, Casey absorbed wisdom from Tufts iconic Athletics Director Rocky Carzo and legendary college baseball coaches such as Northeastern’s John “Tinker” Connelly, Princeton’s Tom O’Connell, and Bruce Wheeler of the University of Massachusetts Dartmouth, to name a few. “He’d be the first to say that he built on their foundation,” said his son Brian Casey, A07, who played and coached for his father.

>>> Watch a video of Coach Casey and his sons discussing the family's baseball legacy.

In a home game against Colby, Brian and younger brother Kevin, playing second and third base respectively for the Jumbos, recorded the final out that gave their dad his 400th win and an indelible memory. All four Casey sons coach baseball, joining countless young coaches with whom John Casey has shared his experience, challenges, and knowledge, noted Noone.

Noone also credits Casey with elevating the profile of college baseball in New England and consistently advocating for the best interests of the sport as a whole. He recalled a national convention at which Casey urged other coaches to expand fall baseball to give students more playing opportunities and to support student retention. 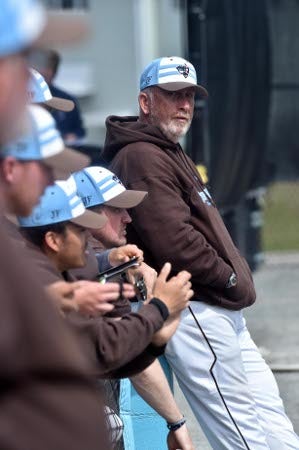 “When you look at Tufts baseball and you look at John Casey, you can’t separate the two,” said Matt Lyman, E96, EG99, who both played and coached for Casey. Photo: SportsPix
“I was impressed because NESCAC doesn’t allow fall baseball. He stood up for this expansion even though it didn’t directly benefit him,” said Noone. “To me, that speaks volumes for who he was as a coach and a leader.” (Since then, fall baseball has, in fact, expanded.)

Casey found his touchstone for success in core values: Leave the program better than you found it. Honor those who wore the uniform before you did. Respect your opponents, your school, and the game. Be a positive force outside of baseball. He challenged himself, his players, his coaches, and his profession to uphold those values.

“Coach Casey has standards and expects you to rise to those standards. He doesn’t just say those things, he really believes in them, and the people who play for him believe them, too, and it’s become a way to approach life,” said Lyman. “You don’t always see that kind of coaching today.”

Casey, and the culture he built, was a big reason Peter DeMaria, A22, 2019 NESCAC Rookie of the Year, chose to come to Tufts. “Coach Casey always instilled the importance of attitude and effort to develop every student athlete. He encouraged the team not only to be the best players we could be but also to demonstrate a high character and accountability that could translate into life after Tufts,” said DeMaria.

“On the field, it’s evident he’s one of the best coaches in college baseball. His knowledge of the game is incredible,” DeMaria added. “Off the field, his sense of community and philanthropy is second to none.”

Such community and philanthropy take many forms. Bob Clarke recalls how a trip to the Dominican Republic during the 2019 Thanksgiving break enriched the experience of the players while helping residents in the village of Gautier. In addition to playing four competitive games against area teams, including a Red Sox affiliate, the Jumbos helped paint houses for Gautier residents and engaged with local children.

The team has also “drafted” children facing chronic and life-threatening diseases through the Friends of Jaclyn Foundation and Team IMPACT, aided severely injured veterans through Homes For Our Troops, and supported Big Brothers and Big Sisters.

When on-campus activities paused during the COVID-19 pandemic, the team stayed strong. “Coach Casey emphasized that even though we were at our individual homes, scattered across the country, we were still connected,” said DeMaria. “We had regularly scheduled online meetings, and he would always ask how everyone and their families were doing during such a tough time.”

That sense of community also enabled the players to talk directly about racial justice as part of the wider reckoning about racism in America that followed the murder of George Floyd in spring 2020. “Having those conversations brings a team closer in the end,” said DeMaria.

Tufts baseball today is an extended family, supporting its members post-graduation through good times and bad, weddings and wakes, said Clarke. Lyman recalled that when Casey was inducted into the ABCA Hall of Fame in Nashville, about 100 friends and family attended; one alumnus flew in from California to attend and then flew back after the ceremony.

“His career is a remarkable success because of how much the Tufts players love their program and love their coach,” said Noone. “Alumni are unbelievably loyal and proud to have played for Coach Casey. That is the ultimate sign of success, way above wins and losses.”