When Elena Martinez was in high school, her grandfather was suffering from Alzheimer’s disease, and she set out to learn about it as much as she could. She started reading research papers, and was struck by the amount of math that was involved.

“It sparked the idea that I can use mathematics to address a lot of problems in the world,” she says. Her parents had immigrated from Mexico, and didn’t have a background in the subject, but she started focusing on math, which she’s now studying in college in California.

Kosta Tsingas, whose parents came to the U.S. from Greece, was interested in mathematics early on in high school, when he would unofficially tutor others “and in my free time answer any math questions they had,” he says. He exhausted all the math options at his public high school and took advanced classes at a local community college. Now a first-generation college student at the University of Pennsylvania, he’s pursuing research in computational biology and applied math. 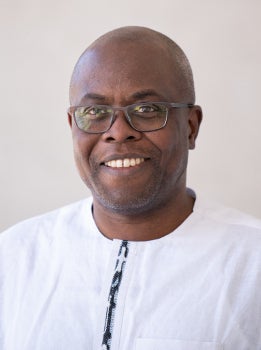 Professor Kasso Okoudjou, who co-led the program this summer, says that all of the students “were very engaged.”
For Martinez and Tsingas, becoming conversant in mathematics research is critical to their advancement in the field. That’s what led them—and 11 other college students—to Tufts this summer to take part in a research experience for undergraduates who are mentored by Tufts mathematics faculty.

The intensive 10-week program in applied and pure mathematics, funded by the National Science Foundation, seeks to provide opportunities for underrepresented students in the field. Out of more than 150 applicants, the 13 students, mostly rising juniors, were chosen and divided up into four groups working with different faculty. Three students were from Tufts; the rest from universities across the U.S.

Professor Kasso Okoudjou, who ran a similar program for three years at the University of Maryland, where he taught before coming to Tufts in 2020, found it “very rewarding,” he says. This summer, he mentored four students, and says “they were very engaged.” Other mathematics faculty mentors were Todd Quinto, Kim Ruane, Genevieve Walsh, Fulton Gonzalez, James Adler, and Xiaozhe Hu.

Normally, students in the program come and live on campus, but the COVID-19 pandemic meant that they were all remote. Still, it seemed to work fine.

“I’ve grown accustomed to remote learning,” says Tsingas. It also allowed him flexibility. He had family responsibilities at home in Pennsylvania and the online program gave him the flexibility he needed. “I got to know the faculty not only as researchers and mathematicians, but as people, too,” he says.

Martinez, who lives in Los Angeles, says that it was easier to set up meetings remotely. “There were times when I had a problem I couldn’t figure out, and we could meet the next day on Zoom,” she says. “Sometimes Dr. Quinto would schedule even three meetings a week, plus the meeting with the whole group.”

The only downside for her, says Martinez, was the time difference—making early morning meetings and remembering to show up on time. “But it’s an important skill to make sure to clarify what time zone people are in,” she laughs.

Rebecca Barry, a student at Bentley University in Waltham, Massachusetts, worked on computational aspects of geometric group theory with professors Kim Ruane and Genevieve Walsh, along with postdoc Lorenzo Ruffoni and graduate student McKenzie McPike. Barry is a mathematical sciences major, and says she valued her research experience at Tufts, and the different teaching styles of her faculty mentors.

She wants to go to graduate school and get a Ph.D. in pure mathematics, and eventually become a professor. “I feel like this experience has definitely helped solidify my desire and passion to pursue that,” she says. “As I continue to get to know and work with people who conduct research and who share my excitement for learning, I feel reinvigorated and more inspired. I’d love to be an active member of the academic community as a graduate student and hopefully a collaborator and mentor.” She’s now thinking she might apply to grad school at Tufts.

Tsingas worked with Quinto and other students on limited data tomography. He explains it as “the mathematical study of using limited data to reconstruct an image of an object using algorithmic approaches.” He studied sonar, used in this case to determine structural boundaries of objects in the ocean.

During the program, he developed a novel numerical algorithm that minimizes visual anomalies. “This algorithm has future potential to inform engineering decisions for imaging software not only in sonar but also in photoacoustic imaging, which is a related problem,” he says.

For Martinez, having a mentor like Quinto in your corner “can make a really big difference when it comes to being confident as a researcher,” she says. It’s also made thinking about going to grad school “much less of a daunting challenge.”

She studied mathematical tomography, focusing on what’s called bistatic radar. “Elena discovered an important new type of artifact that shows a real limitation that is intrinsic in the radar problem,” Quinto says. “This is exciting and important as we work together to understand and then decrease its effects.”

The Tufts faculty “gave me the resources I needed to trust myself and my skills, and assured me that no matter what I do or where I end up, I will find a way to put my knowledge to good use and pursue what I want to pursue,” says Tsingas, who is thinking about a Ph.D. program focused on bioinformatics or biostatistics.

It’s that kind of result that makes Okoudjou happy. In his most recent report to the NSF, he noted that more than half of the 45 to 50 young people who participated in the summer research opportunity went on to get graduate degrees in STEM fields. “It’s very satisfying,” he says.