Hard Lessons from the Pandemic in Rio de Janeiro

In March of 2020, Cidade de Deus, a low-income neighborhood in Rio de Janeiro, had its first case of COVID-19. The neighborhood is commonly referred to as a favela, an informal settlement with little access to resources and services. As the disease spread, the community faced hunger and unemployment in addition to illness and death.

Anjuli Fahlberg, an assistant professor of sociology, has been working with community members in Cidade de Deus to understand and document the pandemic’s impact on their lives. She and colleagues conducted a survey of 648 residents there in February and March and published reports on the economic, physical, and mental health effects of COVID-19 in the neighborhood.

Despite the fact that 61 percent of respondents reported losing a close friend or family member to the disease, the biggest concern for most people was their financial security.

“When we asked people to pick the biggest problem that impacted them during the pandemic, 59 percent of people selected loss of jobs and income,” Fahlberg says. “There was just this massive loss of income, and at the same time the prices of rice and beans and other basic food items went up by an average of 19 percent.”

“This is not to say that people are not also suffering from traumas related to the death of family members from COVID-19 or the psychological effects of social isolation,” the researchers wrote in their report on the economic state of the community. “What it demonstrates is that, in situations of high economic vulnerability, people are so concerned about how to survive in their daily lives that this becomes more urgent than mourning those who have died.”

Fahlberg, who grew up in Rio de Janeiro, has been working in Cidade de Deus since 2014. She uses an approach called participatory action research, in which researchers work collaboratively with the population they are studying to develop research questions and collect and disseminate data. This approach helps generate new ideas and ensures that results can benefit the community being studied, Fahlberg says. 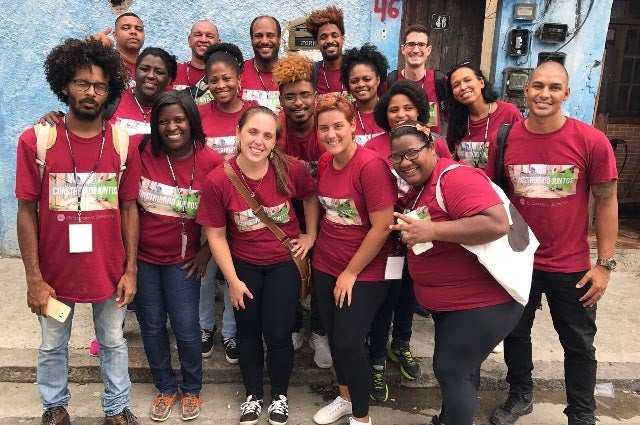 “In situations of high economic vulnerability, people are so concerned about how to survive in their daily lives that this becomes more urgent than mourning those who have died,” says Anjuli Fahlberg, front row third from left, with her survey team in 2017.
Fahlberg had previously helped to design and conduct a survey in Cidade de Deus to understand social development in the context of violence and poverty in the neighborhood. As the pandemic hit, her colleagues in the community saw a need to document the challenges people in the neighborhood were facing.

“People wanted the project to be done in this participatory manner, because often it’s outside researchers — or even the Brazilian government — that decides what they’re going to survey,” Fahlberg says. “That doesn’t always reflect what local residents would have done had they been the ones creating the study.”

To collaboratively design the survey on the impact of the pandemic, the researchers first met with representatives from community-based organizations and collectives that had been distributing resources, aid, and information during the pandemic. Their goal was to understand what types of information would be most useful to these groups in sustaining their work and acquiring more funding and resources.

Then they solicited input from the larger community through neighborhood Facebook pages and WhatsApp messaging groups. Community members were invited to submit personal narratives about how the pandemic had most impacted their lives.

The team, which included Tufts undergraduate student Sophia Costa, A23, as well as collaborators in Cidade de Deus, developed a 60-question survey based on themes that had emerged from the forums and personal narratives, as well as feedback from local service providers.

The survey had sections on income, education, physical and mental health, family dynamics, and beliefs and attitudes about COVID-19. The researchers recruited local community members to help spread word of the survey as widely as possible. Even with those efforts, it is not perfectly representative of Cidade de Deus, Fahlberg says, because it primarily reached people with cell phones or Internet access, so likely missed the poorest members of the community.

Still, the group’s research shows that Cidade de Deus is in desperate need of assistance as the pandemic continues. It’s equally likely that others of the many favelas around Rio de Janeiro are in similarly dire states. Community partners and activists in Cidade de Deus have already started using the survey data in grant applications, Fahlberg says, and to advocate for the resources people need most. The work has also garnered media attention from Brazil’s largest news organization, O Globo, and several other platforms.

“When you have statistics that demonstrate the extent to which people are being impacted in different ways, that information can be used to show policymakers, service providers, and public agencies what the community’s needs actually are, and to prove that these are severe problems that need to be addressed,” Fahlberg says. “The more data that gets produced about favelas, and the more that this kind of data gets in the news, the more pressure it puts on policymakers to act.”