The U.S.-Mexico Immigration Crisis, from South of the Border

Editor's Note: The documentary Waylaid In Tijuana is now available for viewing on YouTube.

The U.S. also implemented a controversial policy dubbed “Remain in Mexico,” which requires asylum seekers to wait in that country while their cases wind through the U.S. courts. Under that policy, more than 60,000 people seeking asylum have been sent back to Mexico.

A new documentary produced by a Tufts professor, Waylaid in Tijuana, shows the crisis from south of the border. “In the last 10 or so years, Mexico has transformed into a country of transit, or even settlement,” for migrants from farther south, said Katrina Burgess, the film’s co-writer and producer.

Burgess is an associate professor of political economy and director of the Henry J. Leir Institute at The Fletcher School and the author of Courting Migrants: How States Make Diasporas and Diasporas Make States. The film grew out of her research, funded by the Carnegie Corporation of New York, on the movement of people from Central America and Haiti through Mexico. 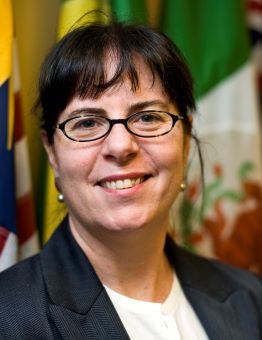 “The Trump administration has implemented a host of new policies to prevent Central Americans and others from requesting and/or receiving asylum” in the United States, said Katrina Burgess. Photo: Alonso Nichols
The documentary weaves together history, expert commentary, and heart-wrenching personal interviews with migrants from Central America and Haiti, providing a window on the reasons migrants leave their home countries, such as natural disasters, gang violence, and violence against women. It highlights how migration and U.S. policies affect Tijuana, and the extraordinary challenges facing asylum seekers and migrants stuck there.

Waylaid in Tijuana was Burgess’s first foray into filmmaking. She created the documentary with co-writer Aída Silva Hernández, a professor at the Autonomous University of Baja California in Tijuana, and filmmaker Tim Ouillette, who directed.

“We arrived in Tijuana in February 2019 (the Remain in Mexico program had started in January) and realized, ‘Wow, this is so rich,’” Burgess recalled. “What we’d imagined as a five-minute video ended up being an almost hour-long documentary.”

The Leir Institute has hosted two screenings of Waylaid in Tijuana, which has also been screened by academic institutions in Mexico and Italy and used as a training tool by migrant advocates. Burgess hopes to show the film to policymakers in Washington, D.C., and then release it more broadly via YouTube.

Tufts Now: What did you hope this film would accomplish?

Katrina Burgess: We wanted to raise awareness and catalyze some helpful action. We hoped to reach a broader audience, and this was something we debated as a team: “Is there a sweet spot between making these issues really understandable and accessible to people who don’t know much about them, while also capturing the complexity?”

We included the story of U.S. involvement in the region, and we highlight different populations of people—the Haitian and Central American experiences are quite different. We’re doing, probably, too much, but we didn’t want to lose that richness and complexity.

The film explains that 300,000 people cross Mexico every year trying to get to the United States. Has that changed in recent years?

The number of Central Americans crossing Mexico has been relatively consistent over the past decade, but the profile of these migrants has changed from mostly young men to unaccompanied minors, women, and families. Two other changes at the time of filming were their mode of travel, from small groups to large caravans, and their strategy for entering the United States—from sneaking across the border to requesting asylum.

These changes have not lasted, however, because the Trump administration has crippled the U.S. asylum system while putting enormous pressure on Mexico to break up caravans and detain and deport Central Americans—and Haitians—before they get anywhere near the U.S. border.

The documentary details some of the United States’ history in Nicaragua, Guatemala, and El Salvador, and notes that there is a debate about the United States’ responsibility for changes in migration patterns from Central America through Mexico. What is the debate?

To explain it succinctly: One, did U.S. intervention create the conditions now driving people from their homes? And two, does the United States therefore have an obligation to be more welcoming to Central American migrants? My answer to both questions would be yes, but not everyone agrees with me.

How have U.S. policy developments affected asylum seekers and migrants in the region?

The policy landscape has changed dramatically since we shot the film in February 2019. The Trump administration has implemented a host of new policies to prevent Central Americans and others from requesting and/or receiving asylum, and Mexico now detains and deports more Central Americans and Haitians than the United States. When the pandemic hit in March, the United States government invoked a little-known CDC provision, Title 42, to expel—so far—over 100,000 migrants at the border, without any hearing, including asylum seekers and unaccompanied minors.

I am horrified by this. Destroying the asylum system and criminalizing migrants tears families apart and ruins lives without making anyone safer or more secure. To the contrary, it only plays into the hands of organized crime—as smugglers become more sophisticated and expensive and migrants become more vulnerable to kidnapping and extortion—and worsens the trauma, despair, and violence that drive people from their homes in the first place.

Note: A version of this story originally ran in September 2020; this page was updated in September 2021, to provide the newly available link to the documentary on YouTube.