From the national tour of “In the Heights” and the Tony-winning “Fun Home” to shows he writes himself, Joel Perez brings a fresh perspective to the stage

One summer night in 2008, Joel Perez, A08, settled into his seat in Broadway’s Richard Rodgers Theatre and watched the curtain rise on a graffiti-splashed, bodega-on-the-corner neighborhood in New York City. At the very first line, delivered in warp-speed hip-hop staccato, “Lights up on Washington Heights up at the break of day/I wake up and I got this little punk I gotta chase away,” Perez sat bolt upright.

He knew this world. He could practically taste the syrupy-sweet shaved ice piraguas the cart vendor hawked under rickety fire escapes onstage. The show, In the Heights, would take Broadway by storm and make Lin-Manuel Miranda, its creator and star, a household name.

“It had never entered my consciousness that there were musicals that starred Latinx people,” said Perez, whose parents, like Miranda’s, were originally from Puerto Rico. “Seeing In the Heights, I thought, that is my family!”

In a 2019 production of the irreverent musical "Kiss My Aztec!," Joel Perez played the protagonist, Pepe, an Aztec clown who helps lead a rebellion against the Spanish in colonial Mexico.

While Perez was aware of West Side Story, he never identified with its narrative of gang violence and oppression. That wasn’t his experience growing up in Lawrence, Massachusetts, a predominantly Puerto Rican and Dominican community about 40 miles north of Boston. “In the Heights celebrated Latinxs and focused on their dreams and personal joys. It is the kind of work I wanted to see myself doing.”

Perez’s father, a Pentecostal minister, left Puerto Rico at age 12, and his mother, now a retired teacher, left in her 20s. “Something that’s very near and dear to my heart is my culture and my family. I never want to feel I have to erase or silence that part of myself,” Perez said.

He attended In the Heights as part of SpringboardNYC, an intensive theater program, after graduation. Two years and six auditions later, he landed an ensemble role in the show’s first national tour. When they played for a week in Puerto Rico, it felt like home, he said. His parents flew down to see him perform. Perez, whose career spans television, film, voiceovers, and commercials (many in Spanish), will appear in Lin-Manuel Miranda’s directorial debut—the Netflix movie musical Tick, Tick...Boom!—later this year. 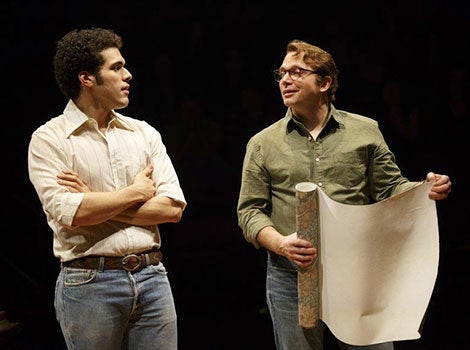 Joel Perez (pictured with co-star Michael Cerveris) made his Broadway debut playing four roles in the musical drama "Fun Home." Perez was an original cast member in the show before it transferred to Broadway in 2015. Photo: Joan Marcus
Perez’s wide-ranging talents won him accolades when he made his Broadway debut in Fun Home, a musical drama in which he played four different roles, ranging from a teenage student to a ’70s rock star. The show, which debuted at the Public Theater and transferred to Circle in the Square in 2015, won multiple Tony awards and broke ground as the first Broadway play whose lead characters are gay. But for Perez, the greatest thrill was meeting audience members at the stage door who were excited to see a Latinx performer on the Broadway stage.

While musicals showcase Perez’s gifts as a “triple threat” (a singer, dancer, and actor), the silent world of mime also shapes him as an artist. He and Rebecca Baumwoll, A10, who performed with the Tufts student mime ensemble Hype!, cofounded Broken Box Mime Theatre with several other alumni in New York. “In mime, your body is the storytelling tool,” he said. “I can’t hide behind my singing voice or a costume piece. It’s very vulnerable and it helps ground me.” That carries over to the highly visual medium of film, he said, “where a simple raise of an eyebrow or a tilt of the head tells so much.”

Perez wrote Besos [Kisses], a sendup of a telenovela, or Latinx soap opera, for one of the mime company’s first shows. His charisma and gift for building community make him “a pleasure to work with, which is a superpower in a creative field like ours,” Baumwoll said.

When COVID-19 shuttered the New York theater where Perez was performing last year, he qualified for unemployment. He used it as a kind of artist stipend and started writing—often with a glass of homemade coquito, a Puerto Rican eggnog, by his side.

His cultural identity infused his writing. “Although this was a very dark time for a lot of us in our country—not just with COVID, but with Black Lives Matter and a lot of political unrest—it felt like a very clarifying time to consider ‘What are the kinds of stories that I want to tell? What’s the kind of artist that I want to be?’”

Black Beans Project, a one-act play he co-wrote with Melinda Lopez, was produced by Boston’s Huntington Theater and aired in May. Filmed via Zoom from their kitchens, the two portray half-siblings trying to recreate their mother’s black beans recipe soon after her death. As they chop onions, mince garlic, and debate the merits of dried versus canned beans, their Spanglish dialogue reveals childhood misunderstandings and their pandemic-fractured lives.

Perez also wrote and performed Playing with Myself, an irreverent yet affectionate autobiographical one-man show about “growing up as a queer, Puerto Rican, ex-Pentecostal” that premiered online in June as part of Ars Nova’s new works residency. At one point in the piece, which includes songs like “Musical Theater Made Me Gay,” Perez tells the audience: “You think this is a comedy show. We are processing my trauma through art.” He isn’t kidding.

As an audience member, “when you laugh, you feel comfortable, your defenses are down,” he said. That’s when a comedian “can really hit someone with an emotional gut punch.” 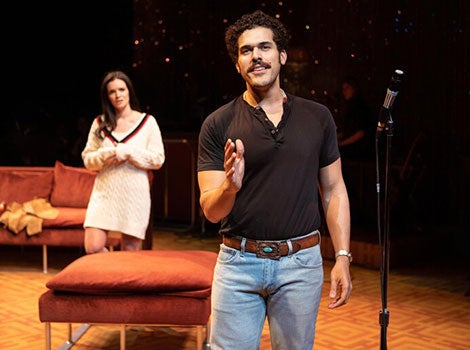 Perez is also writing a TV pilot for a workplace comedy called You’re Tired, You’re Poor, set in an immigration law firm. Funded by a WarnerMedia 150 grant, the script will be passed around to executives at all the Time Warner networks for consideration.

Perez’s fascination with America’s migration stories starts with that of his own family. Although he sang in his father’s choir and performed in musicals in high school, he came to Tufts with medical school in mind, reflecting his parents’ ambitions. But after a fellow member of the Tufts Chamber Singers encouraged him to audition for a Torn Ticket production of Children of Eden, he was hooked.

He switched his major to theater and wrote telenovela parodies for the annual culture show at his home away from home, the Latino Center (now the Tufts Latinx Center). He also appeared in several productions at the Balch Arena Theatre. His role as The Player in Tom Stoppard’s Rosencrantz and Guildenstern Are Dead was seminal to the rest of his career. “It was this big, audacious character. I felt I could have the audience in the palm of my hand,” he said.

That production also taught him to do his artistic homework. When he told theater professor Sheridan Thomas, who directed the show, that he wanted to make more of his own creative choices in the role, she responded, “‘then show up to rehearsal prepared and show me what you want to do,’” he said. He’s still guided by that advice: “You must take the initiative in terms of getting yourself known, getting yourself out there, making strong and clear choices.”

As the performance world slowly reopens, Perez hopes that the hard work that he and other creative professionals do will be appreciated even more. “I mean, everyone escaped to art during the pandemic. Everyone ran to Netflix,” he said. “And who created all that? Artists.”

Jamie Saxon, J83, is a freelance writer based in New Jersey.