Most of the 26 million or so people who tune into Twitch on any given day are there for the video games. But amid the livestreaming platform’s thousands of channels—which mostly feature gamers broadcasting their screens while narrating their every move—you’ll find Alok Kanojia, AG08, MG09, M14, MG14, doing something different. Affectionately known as “Dr. K” in the Twitch community, the young psychiatrist might be leading a guided meditation, explaining attachment theory, or chatting with a Twitch gaming star about their panic disorder. 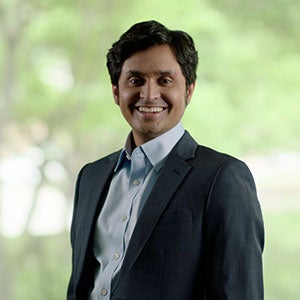 “I want to help people use technology in a healthy way so that they can also integrate back into life,” says Alok Kanojia, AG08, MG09, M14, MG14. Photo: Courtesy of Healthy Gamer
Kanojia has a warm demeanor and a conversational tone that put viewers at ease. On a recent afternoon, as he discussed how people with social anxiety can cope with reintegrating into the world as pandemic restrictions lift, comments from the 40,000-plus live viewers raced through the chat box. Some offloaded heavy concerns. (“I never even left the house before COVID.” “I can’t control the physical symptoms of my anxiety.” “I just don’t think people like me.”) Others shared their appreciation. (“I’ve learned good coping skills from watching your streams.”) Others posed questions. (“Is this how you get rid of TikTok brain?” asked one user during a guided meditation toward the end.)

“TikTok brain” is a decent label for what Kanojia is trying to treat as the founder of Healthy Gamer, a mental health platform for the internet generation. “The pace of technology is evolving so rapidly that neither medicine nor human psychology can keep up,” he said. “Attention spans are shrinking and ADHD is on the rise. First there was Facebook, then there was YouTube, and now there's TikTok—and the whole point of TikTok is it's like a quick dopamine hit in 60 seconds. I see technology preying on our psychology.”

Kanojia knows this firsthand. Growing up in Texas, he developed a problematic addiction to online games by the time he was in high school. It got worse during college. “I was playing games all day long,” he recalled of his first semester at the University of Texas at Austin, where he quickly ended up on academic probation. “I was able to scrape by and raise my GPA just enough to not get kicked out—but things just weren’t working.”

Knowing he had a problem, Kanojia’s family tried “everything under the sun” to help. Nothing really worked until his dad suggested he travel to India—Kanojia’s parents’ home country—to study yoga and meditation at an ashram. There he learned to look inward and explore how his mind worked. Meditation and other techniques helped him to balance gaming with other aspects of his life, and a three-month stint at the monastery turned into seven years.

Kanojia was on the path to becoming a monk when he met his now-wife, Kruti, and decided to return to the U.S. to pursue medicine. He landed a research assistant position at Harvard, earned master’s degrees in biology and biomedical sciences at Tufts, and ultimately was accepted to Tufts’ combined four-year M.D./M.P.H. program, where he excelled. “Alok has a special ability to connect with patients from all walks of life,” said Laura Snydman, an assistant professor at Tufts University School of Medicine. She recalled an elderly homeless patient telling her how much Kanojia cares and that he “has a halo around him.” “He’s the real deal,” Snydman added. “He puts his entire self into everything he does, and he is one of the most remarkable people I’ve ever met.”

Kanojia sees Tufts as integral to Healthy Gamer’s origin story. His studies in public health helped him think about health care broadly, opening his eyes to the importance of large-scale public health interventions. “I can treat as many people as I want with lung cancer, but as long as people are smoking, lung cancer is going to be a problem,” he said. “As a physician, there are some problems you can’t fix—if [patients are] calling you, it’s already too late.” Kanojia realized that systemic issues need to be addressed in larger ways than one-on-one consultation with patients.

Gaming addiction is one of those systemic issues. Studies estimate that up to 3% of the world population, and up to 12% of boys and male adolescents, could have a gaming disorder, which the World Health Organization defines as a pattern of gaming behavior that is difficult to control and interferes with one’s other interests and activities.

When Kanojia was completing his residency at Mass General and MacLean hospitals, it was a problem that few people seemed to be talking about. So he started holding informal online support groups for gamers and posting to online forums about gaming addiction. The response was overwhelming: His residency hospital started getting calls from people across the world looking for help with gaming problems; his Reddit posts on the topic soared to the front page of the site.

As Kanojia deepened his focus on gaming and mental health, eventually launching a psychiatric practice and starting to stream on Twitch, demand only accelerated. “I probably get between 1,000d and 10,000 requests from people to work with me per month,” he said. “And there's just no way that as a clinician, I'm going to be able to do that. That’s why we started Healthy Gamer—because this is something that I can't fix on my own. But we as a community and as a public health intervention can come together and support each other.”

While he still sees some patients through the private practice, Kanojia now spends about 80% of his time growing Healthy Gamer. The company offers group and individual virtual coaching sessions with coaches trained by Kanojia, who have worked with 5,000 clients in 64 countries in the past year alone. Healthy Gamer also curates videos of the doctor discussing mental health topics and guides to meditation, anxiety, and depression, and it oversees an online community of 55,000 gamers on the group-chatting platform Discord, who discuss mental health and share experiences. But none of these efforts is a substitute for therapy; the company urges those with clinical issues to seek professional help offline.

In May, the company launched the Healthy Gamer Foundation, a nonprofit that funds and conducts research to influence mental health policy. The organization also provides personal grants to help young people with gaming addiction get back on track.

Meanwhile, Kanojia continues to meet gamers where they are: streaming on Twitch a few times per week. It’s not lost on the doctor that he’s fighting mental health issues using the very platforms and technologies he blames for fueling a mental health crisis. “We can’t beat technology without technology,” he said. “I want to help people use technology in a healthy way so that they can also integrate back into life. That’s the only way it’s going to work.” 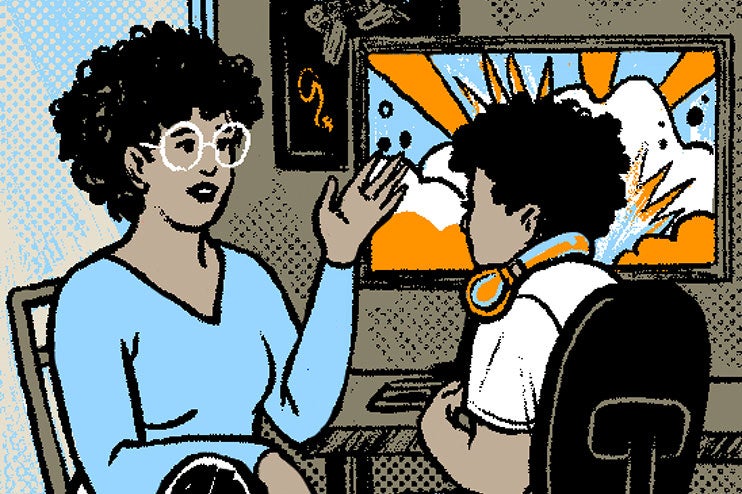 Are you struggling to support a child, family member, or friend with a problematic video game habit? Alok Kanojia offers these tips.

1. Understand that the game is not just a game.

“It’s a part of their life. Games are the ways we form social communities, we form connections. Sometimes gaming can also be a career, with EA Sports, with Twitch, with YouTube. When you take someone’s game away, you can take their life away. Oftentimes gamers understand that their gaming is problematic. But as long as you’re on the attack, they will never admit it. Build an alliance first and then tackle the gaming.”

2. Start with listening instead of teaching.

“Try to understand: Why do they play the game? What do they want to be in life, if anything? As you start talking to [the gamer] in a non-judgmental way, you can align your goals. You can say, ‘OK, so it sounds like you really want to work as a video game developer one day. Do you think that playing games 10 hours a day is going to help you do that? Do they hire people who play video games?’ [The gamer] knows, no, they don't. They hire programmers. Then you can talk about how programmers get their degrees, how they get into college, and what the gamer wants to do about that.”

“Once you align your goals, you say, ‘OK, I want to help you achieve your dreams. But in order to do that, since it sounds like you can't limit your gaming, do you want me to enforce some limits for you?’ And then it's amazing. The [gamer] says yes and then the entire ball game changes. Because as long as they have one goal and you have a different goal, it's not going to work. But if you can be aligned, that's when we see really impactful, positive change.”

Molly McDonough is a freelance writer based in Vermont. Send comments to now@tufts.edu.

When Research Is Personal, ‘It’s My Own, It’s Home’