Searching for Answers Through Art

Eva Bibas, BFA22, channels her lifelong passion for art into multimedia works that explore spirituality and connect her audience to her environment

Eva Bibas, BFA22, has been an artist for as long as she can remember. As a young child, she enjoyed painting on big pieces of paper, whether on the floor or on an easel. As she grew, so did her love of painting and other artistic endeavors.

When she was nine, her family moved from Venezuela to Miami, where she continued to focus on and prioritize her artwork with the support of her family and teachers, despite facing challenges such as learning a new language and adjusting to a new environment.

“A lot of my art pieces deal with themes of transformation and adapting to new places,” says Bibas, who adds that generations of her family went through migrations, sometimes forced, before settling in Venezuela.

The School of Museum of Fine Arts at Tufts student, whose award-winning work has been featured in many exhibitions, blends many different techniques into her pieces, including painting, digital imaging, and paper sculpture. This past summer, she took part in the Tufts Summer Scholars Program, where she fine-tuned her scholarly approach and discovered her interest in creating paintings that are “liberated from the canvas, flexible, and incorporated with the environment.” 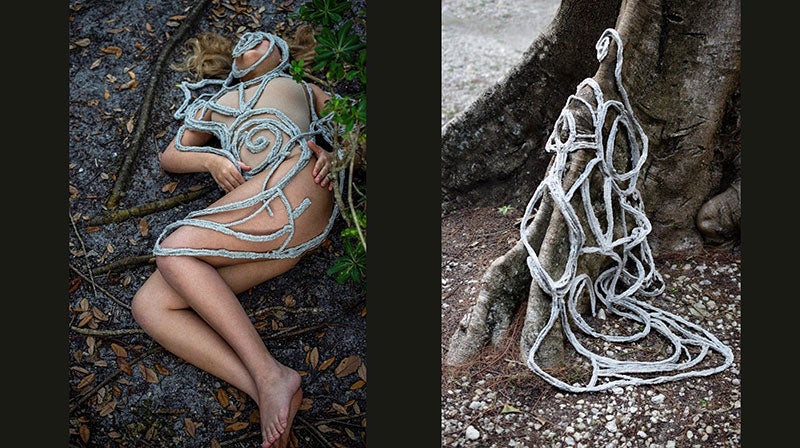 “It is important for my works and my body to be able to interact with the environment,” says Eva Bibas, BFA22. Photo: Courtesy of Eva Bibas

“For Summer Scholars, I conducted material tests with unconventional painting materials and fillers in the form of Hebrew letters, which I then photographed in nature. I used Hebrew letters because in Jewish mystical tradition, they are primal, spiritual forces and building blocks of creation as we know it,” she says. “While photographing these letters I paid attention to their breakability, bendability, how they react when they curve on the objects, whether the letter is stiff, or whether it’s sympathetic to nature.”

She feels a strong connection to divinity while in nature. While she has always been spiritual, her exploration of spirituality increased when her father passed away after an illness. The tremendous loss left her searching for answers in other realms, such as the Kabbalah and Jewish mysticism. 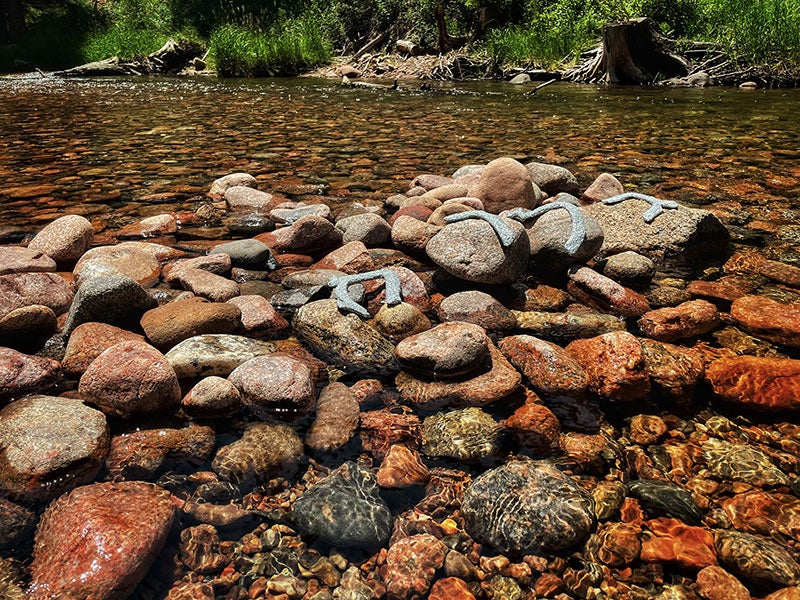 “Hebrew letters are believed to be primordial, spiritual forces — the DNA of the universe. In my art pieces, I incorporate this language, and though sometimes the letters are hidden, they are ever present,” says Eva Bibas, BFA22. Photo: Courtesy of Eva Bibas

Through her work, Bibas tries to tell a story about ancestry, exile, and traditions while using materials, pigments, and substrates that relate to her culture — like calcium carbonate, which is found in limestone and is the main component of shells and pearls.

“This material relates to Miami and Florida since this land sits over limestone. It also relates to the ocean — an important notion in my work for many reasons. The ocean is a nostalgic symbol of my childhood on the Venezuelan beaches and my upbringing in Miami. But it is also a sentimental reminiscence of my story as an immigrant because my family throughout generations has traversed different shores,” says Bibas.

In addition to making her own handmade paints and paper, she’s also been able to create a flexible type of rock. “The idea may seem odd, but this rock mirrors my experiences as a person in exile. So much history and culture is embedded in rock, but the rock I made is flexible because as my family has moved from country to country, we have had to adapt into new cultures.”

When Artists Are Activists