From Renaissance platform shoes that were nearly two feet high to today’s virtual sneakers that can’t even be worn, Elizabeth Semmelhack illuminates the many meanings of footwear

Put yourself in Elizabeth Semmelhack’s shoes. When people meet her and learn she is director and senior curator at the Bata Shoe Museum, they all do the same thing: They glance down to see what’s on her feet.

“This is a hazard of the job—people assessing the footwear I’m wearing,” said Semmelhack, AG93, who over the past 21 years has helped transform the downtown Toronto institution into a major attraction for tourists and shoe scholars alike. 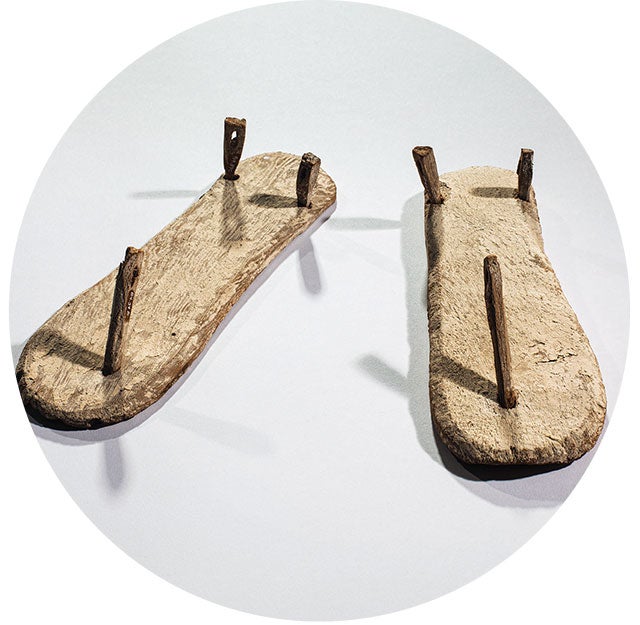 Mourners in ancient Egypt believed the dead needed household goods, so sandals like this wooden pair were often put in tombs. These shoes date to 2565-2278 BC, making them the oldest footwear in the Bata Museum’s collection. Their laces might have been made of cloth, plant material, or leather. Photo: Courtesy of the Bata Shoe Museum
The brainchild of the late Sonja Bata, the wife of multinational footwear maker Thomas Bata, the museum boasts close to 15,000 artifacts—the world’s largest collection of footwear from around the globe—in a modern building inspired by the shape of a shoebox, its tilted roof like a lid playfully left askew. The footwear ranges from 4,500-year-old Egyptian funerary sandals to a pair of virtual sneakers: the RTFKT x Staple pigeon, a non-fungible token that exists only in cyberspace. 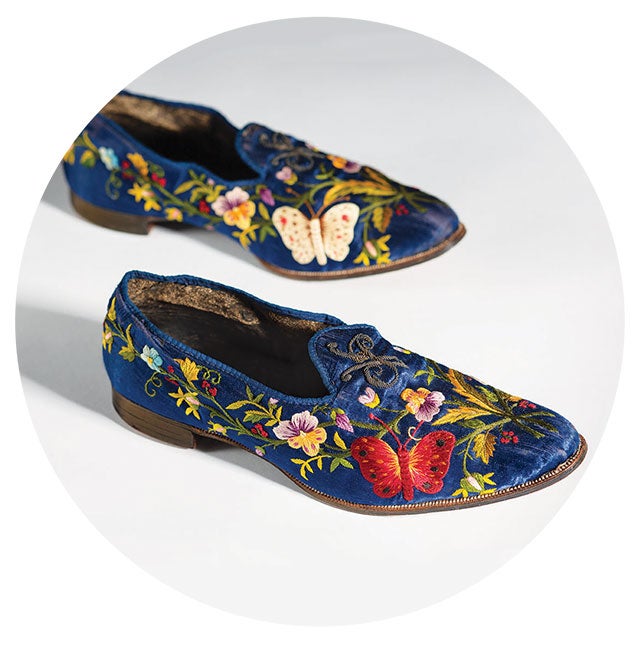 These men’s silk house slippers testify to the love of a devoted wife for her husband. Privileged women in 19th-century Europe often embroidered slippers they gave as gifts. Pansies (pensées) on the shoes are a visual pun, because the word also means thoughts or thoughtful in French. Photo: Courtesy of the Bata Shoe Museum
Semmelhack’s passion is showing how shoes reflect human behavior, a goal reflected in the titles of the nine books she has written and more than 20 exhibitions she has curated. Those exhibitions include Standing Tall: The Curious History of Men in Heels; Fashion Victims: The Pleasures and Perils of Dress in the 19th Century; and the forthcoming All Dolled Up: Fashioning Cultural Expectations, which explores how dolls’ footwear conveys ideas about gender, and Exhibit A: Investigating Crime and Footwear, a show about forensics and footwear.

“Shoes are an entry point into looking at larger cultural issues while simultaneously being very interesting themselves,” Semmelhack said. She came to the museum having been mentored by Dutch art specialist Elizabeth Honig at Tufts and following a stint as chief art history lecturer at the St. Louis Art Museum. 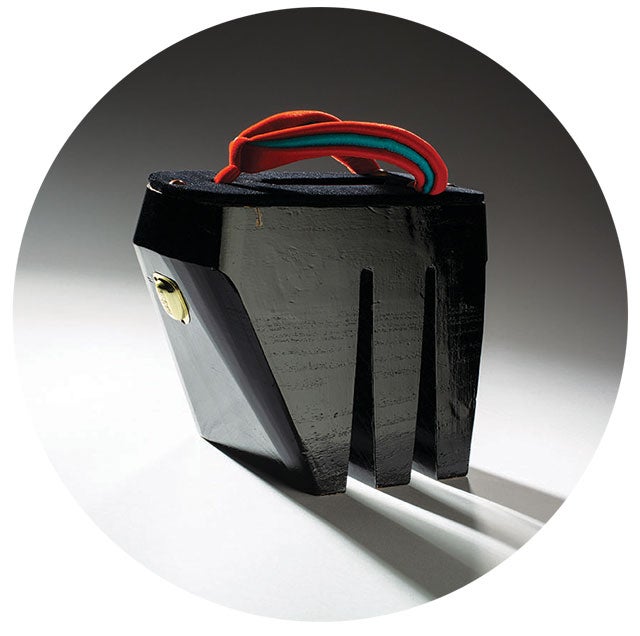 This dramatic lacquered pair of mitsu-ashi geta is a 20th-century replica of the three-toothed wooden sandal worn only by oiran, the highest-ranking brothel workers in late Edo-period Japan (1603-1868). “Western modernism owes Japan a huge debt to the minimalism that’s always been present in Japanese design,” Semmelhack said. Photo: Courtesy of the Bata Shoe Museum
At the time, 18th-century Japanese prints—a popular art form—captivated her. “What I found most appealing about them was that they were an element of popular culture whose makers weren’t trying to speak to larger ‘truths,’” she said. “They were meant to speak to the moment.”

Footwear, like Japanese prints, is mass produced and meant to sell and meet the desires of the day. “When I came here, studying footwear history was like the Wild West of scholarship,” she said. “There were so many whys to be explored and answered. There is no end to the questions I still want to ask about the whys of footwear.” 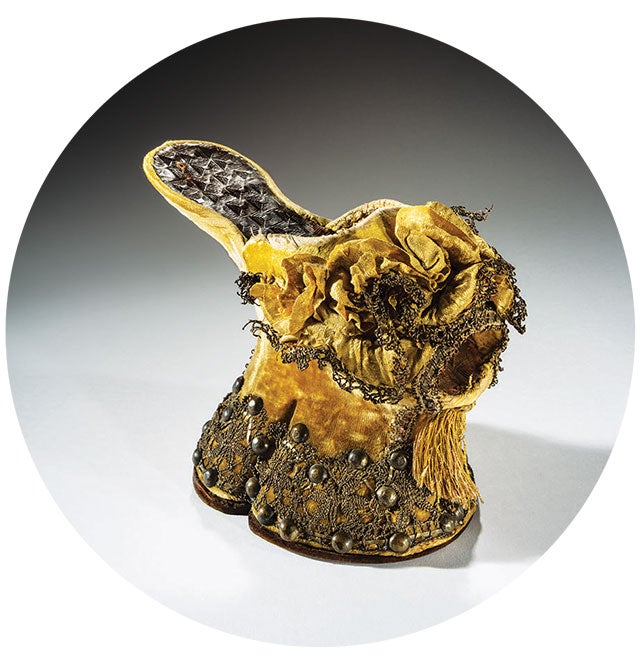 High platform wooden chopines reflected conspicuous consumption in Renaissance Italy. The higher the chopine, the more precious fabric needed for a floor-sweeping dress, thus the greater the perceived wealth of the lady’s family. Only the woman who wore this shoe (and perhaps her husband) would see it. Photo: Courtesy of the Bata Shoe Museum
Consider one of her current fascinations—the Renaissance chopine. These platform shoes made of wood or cork reached the astounding height of 22 inches in Venice. “They were literally elevating and socially elevating,” Semmelhack said. She explained that “in Venice, their purpose wasn’t to improve mobility but to increase the amount of dress fabric used, as they were worn concealed under women’s skirts.” The length of the skirt signified a family’s wealth. “Women wearing them were basically transformed into parade floats,” she said. “It was all an expression of familial wealth, not personal vanity.” 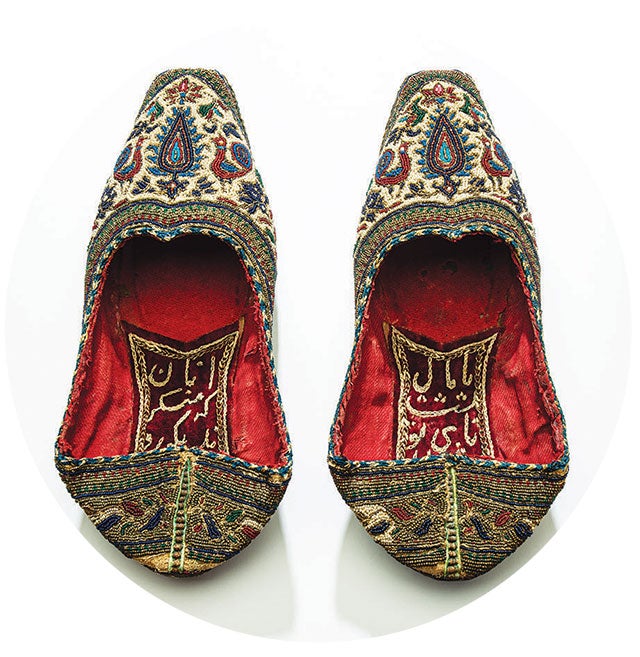 Tiny glass beads and pearls form royal peacocks and the tree of life on these 19th-century Persian slippers, possibly worn by a woman in the Qajar court. The inscription in the right shoe reads, “Your grace puts even the bright face of the sun to shame.” Its partner proclaims, “Let anyone who denies prove otherwise. Praise the dust under your feet.” Photo: Courtesy of the Bata Shoe Museum
Semmelhack has traced the chopine to ancient Greece and believes that their origin may lie in Persia. (She has also traced the high heel to as far back as 10th-century Persia, where cavalry archers wore heels to keep their shoes firmly in their stirrups as they took aim.) While the museum has a pair of chopines and two singles, none satisfy her. “They’re not the soaringly high ones,” she said. Finding taller examples is on her to-do list. 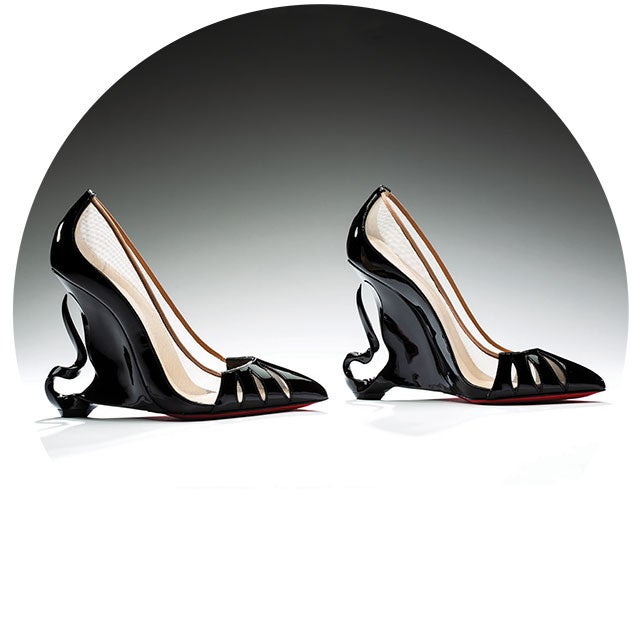 Semmelhack hopes someday to acquire what may be the world’s most famous shoes—the ruby slippers from The Wizard of Oz. Four pairs exist. 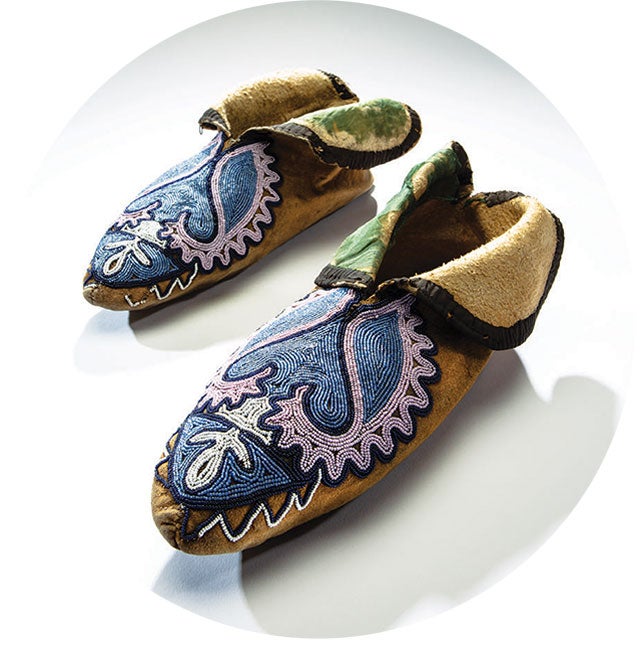 Bold purple beadwork highlights moccasins likely made by a Muscogee (Creek) woman between 1820 and 1850. “The design is well balanced, and the beadwork is so intricate and beautiful,” said Semmelhack. Green silk that once lined the collars has long since worn away. Photo: Courtesy of the Bata Shoe Museum
The Smithsonian has a set, but no matter how many times Semmelhack has clicked her heels, the other three pairs have eluded her.

Today’s hottest style is sneakers. The Bata Shoe Museum boasts a pair of Air Jordan 1s. First sold in 1985, the Air Jordan 1 sparked controversy when—legend has it—the NBA fined high-flying Michael Jordan for wearing a pair in defiance of the league’s uniform rules. No one knew they would help ignite an athletic shoe craze that today has self-professed sneakerheads buying pairs at auction for astronomical sums: In 2019, a Canadian entrepreneur paid $437,500 for a pair of 1972 Nikes. Luckily for the museum, its Air Jordan 1s came as a donation. 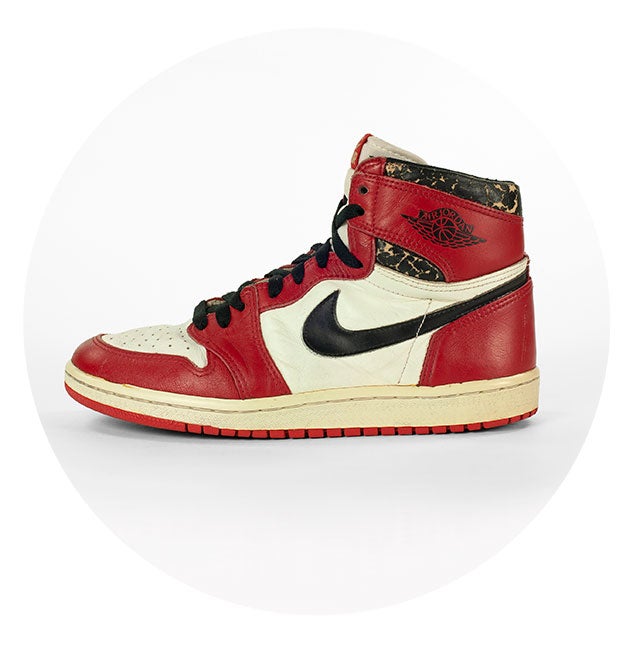 First sold in 1985, Nike’s Air Jordan 1 sparked controversy and inspired an athletic shoe craze that continues today. At least one sneakerhead has paid hundreds of thousands of dollars for a rare pair of Nikes. Photo: Courtesy of the Bata Shoe Museum
Semmelhack’s blockbuster traveling exhibition, Out of the Box: The Rise of Sneaker Culture, attracted more than 500,000 visitors, mostly young men. Putting the lie to the notion that only women care about shoes, Semmelhack said, “I have never experienced such an engaged and enthusiastic set of museum visitors.”

Most of the time, however, women’s shoes attract more attention than men’s, especially in politics. Vice President Kamala Harris turned heads during last year’s campaign with her Converse Chuck Taylor All-Stars. When asked what that might imply, Semmelhack told a reporter for The Guardian, “The sneakers are acting as the sartorial equivalent of being willing to roll up her sleeves” and signaled she is “a woman of action.”

Semmelhack has devoted much thought to how gender influences ideas about footwear. Men who collect expensive sneakers may be making an emotional decision, for example, but they tend to rationalize it as an “investment,” she said. 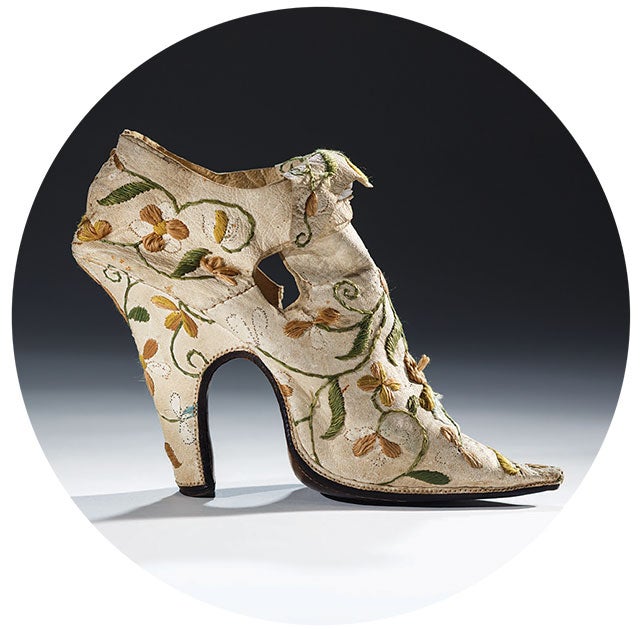 The popular European version of “Cinderella,” written in 1697, reflects the era’s fondness for compact feminine feet, as emphasized by high heels that shorten the shoe length. “The point of the 17th-century heel was to hide the majority of the foot under the skirt, so feet looked small,” said Semmelhack. The illusion here is heightened because the heel slants under the instep, creating an even smaller footprint. Photo: Courtesy of the Bata Shoe Museum
In contrast, a woman’s love of high heels is often treated as frivolous and unreasonable, which Semmelhack calls a vestige of 18th-century Enlightenment thinking. In that period, the idea that women were by nature irrational was used to justify denying women rights, she said.

Social norms still affect our choice of kicks. When Semmelhack meets a man “who wants to establish his heteronormative masculinity by informing me he doesn’t care about fashion or footwear,” she said, “I will often quip back, ‘You know, if you don’t care, would you be OK if I asked you to put on a pair of red stilettos?’ Suddenly he would care.”

For Semmelhack herself, comfort seems to come first. She believes Crocs have established themselves as “the next big thing,” and she doesn’t spend much time buying shoes that aren’t for the museum. “I was barefoot in my home for most of the pandemic,” she said. “But when I was out walking my dog, I mostly wore sneakers.”

Freelance writer George Spencer is based in Hillsborough, North Carolina. He wore black Dansko clogs while writing this article. Send comments to now@tufts.edu