Resettling the Afghans Who Fled from the Taliban

Thousands of evacuees face a long process to rebuild their lives, but communities can make integration easier, a Fletcher School professor says

Resettlement agencies in the United States are scrambling to find new homes for tens of thousands of Afghans who fled their country as its government fell to the Taliban in August. Despite the urgency of the resettlement effort, some evacuees may remain in holding centers for a year or more.

“Even though they are evacuees, the U.S. government will still screen them” for security risks and health issues, said Karen Jacobsen, the Henry J. Leir Professor of Global Migration at The Fletcher School. “The screening process … can take a long time.”

Some 65,000 Afghan evacuees seeking resettlement are expected to arrive in the United States in the next few months and another 30,000 in the coming year. The influx follows the collapse of Afghanistan’s government as the United States withdrew its forces from the country after almost 20 years of military involvement.

The United States has pledged to help Afghans who aided the American war effort or who are considered particularly vulnerable under Taliban rule, such as journalists. Many of the Afghan evacuees don’t qualify for refugee status and are instead considered “humanitarian parolees,” but President Biden has called on Congress to ensure that they have access to the same benefits as refugees.

Tufts Now spoke with Jacobsen to understand the challenges facing Afghans who fled their country—and what others can do to help them rebuild their lives. 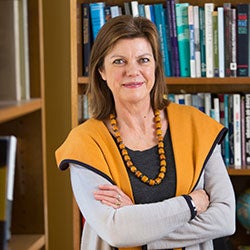 “Lots of people in great danger from the Taliban are still stuck in Afghanistan, and it’s not clear when or whether they’ll be able to leave,” says Karen Jacobsen, the Henry J. Leir Professor of Global Migration at The Fletcher School. Photo: Anna Miller

Tufts Now: This has been called one of the largest U.S. resettlement efforts in decades. What are the challenges with resettling so many people all at once?

Karen Jacobsen: To put this in perspective, the U.S. has an annual quota of refugees that come in to be resettled every year. Trump had pushed that quota down to 15,000, but Biden raised it to 62,500 and is aiming for 125,000 for the fiscal year that started October 1. We’ve got a resettlement backlog in the U.S. right now, in addition to a backlog of well over a million asylum seekers. There are refugees who have been fully vetted and waiting to come to the U.S. for a long time, from other countries.

Since the Afghans are coming in as parolees and on Special Immigrant Visas, they’ll get the same kinds of rights and privileges as resettled refugees—they can work, they can go to school, they get nine months of government assistance. The U.S. has a longstanding system in place to resettle refugees.

The evacuation of people from Afghanistan was rapid and chaotic. How is that affecting the resettlement process?

Lots of people in great danger from the Taliban are still stuck in Afghanistan, and it’s not clear when or whether they’ll be able to leave. Lots of other people are stuck in holding centers and military bases in Europe, the Middle East, and Africa, waiting to come here.

Even though they are evacuees, the U.S. government will still screen them. And it should, because there are concerns about who is mixed up in this population. Hopefully, they’ve all been helping the U.S. and they’re on the right side and there are no bad apples mixed in there. But there is always the possibility that some might be security threats. So the screening process is important, but it can take a long time. I would not be surprised if the people stuck in holding centers outside of the U.S. are there for up to a year, maybe even longer.

In your work with the Refugees in Towns project, what factors have you found that help refugees and others resettle and integrate in new communities successfully?

One of the most important factors is that there is a community of people of the same nationality. Newly arrived refugees often get the most help from their fellow nationals who are already living in the town.

A second factor is the mayor and elected officials in the town. If they are in favor of bringing in refugees, they will make the town a much more welcoming place. If the politicians are opposed to migrants and refugees, they can cause all kinds of other problems. We’ve found that cities and towns in the same state can really differ on how welcoming they are.

When resettlement agencies decide where people should go, they take these factors into account. The cost of housing is another big factor, as is employment, since both will influence how well the migrants do over the long term.

Right now, there seems to be a great deal of sympathy and support for the Afghan evacuees. But you once said, talking about refugees from Syria, that as the number of refugees grows, the citizens of the host country become less sympathetic or willing to provide for them. Do you expect the initial support for those who fled from Afghanistan will last, or do you anticipate a backlash?

A couple of things could happen. One is, if there’s a horrible incident—a bombing or a rape or something like that—that is committed by an immigrant, that can turn people against them, as happened in Europe a few years ago. Anti-immigrant forces don’t want refugees here, so it doesn’t take much to turn people from welcoming and sympathy to, “Who are these people? And why are we supporting them instead of our own people?” Let’s just hope nothing like that happens.

For people who want to help evacuees, do you have any advice?

There are many new organizations appearing, offering all kinds of ways to help. Some might have good ideas, but in general if you want to help it’s best to support longstanding refugee agencies and resettlement agencies that have experience and good track records. Many upstarts really don’t understand how best to help refugees and I think it’s much more useful to give your money to organizations that have been around for a long time and know how to work with refugees. Those organizations really need money and support.

Also, don’t forget that it’s not just Afghans. There are many places around the world where people have been struggling with just as bad, horrific situations, for just as long. Like eastern Congo, or South Sudan or Honduras and El Salvador, or Somalia. There are thousands of refugees waiting to come to the U.S., in all parts of the world. And they’ve been stuck, often in a lot of danger, for a long time.

It’s true that many of the Afghans helped the U.S., but there are many people in other countries who’ve also helped us. And if people are in danger, they’re in danger. It doesn’t matter if they’ve helped us or not.