When M. Soledad Caballero, AG02, thinks back to her childhood, she remembers not one, but two.

Born in Santiago, Chile, in 1973, the year a group of military officers seized power from then-president Salvador Allende, Caballero lived there for seven years. “That was my time in Spanish with my family. It feels like a very intimate time, a primal time,” said Caballero, who teaches, conducts research, and co-runs the interdisciplinary Cognitive Humanities Lab at Allegheny College with her colleague Aimee Knupsky. Her first poetry collection—I Was a Bell, winner of the Benjamin Saltman Poetry Award—explores personal and historical memory and her experiences as an immigrant and cancer survivor.

Caballero doesn’t recall much about the political climate during her early years in Chile. She does, however, have vivid memories that play like movie clips upon experiencing certain sensory details. “If I get the smell of musky dirt, I remember my grandparents’ beach house. I remember my grandfather picking my aunt up after school.”

Caballero’s second childhood started when her family moved to Stillwater, O.K. Her father earned a Ph.D. in mathematics. Her mother, who had studied opthalmology, ended up taking a retail job, then running a daycare at home, then doing bilingual customer service. Caballero kept speaking Spanish with her mother, but at school and in all other ways, she lived life in English.

She didn’t think much about her lost years in Spanish as she earned her B.A. in English with minors in women’s studies and psychology, and wrote a collection of poems for her undergraduate honors thesis. But things changed as she worked on her Tufts dissertation on British Romanticist women’s travel writing in the Americas, examining how the writers brought their own cultural baggage to exploring a new place. “I’ve always responded to the idea that you can be an insider in some spaces and an outsider in others,” she said. 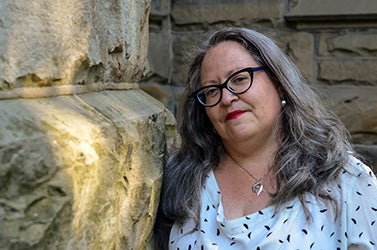 The project made Caballero think more about the role of the U.S. in Latin America in the ’70s and particularly in the Chilean coup—and about who she would have been if her family hadn’t emigrated. Ideas about identity, boundaries, and connection continued to percolate as she landed her first teaching position in Allegheny College’s English department and became interested in using literature to explore a variety of areas, most recently working with a colleague in psychology on the role of empathy in how humans relate to each other.

So Caballero and a colleague founded the Cognitive Humanities Lab, where they supervise undergraduates as they apply scientific and literary approaches to studying emotion, engaging in both experiments and textual analysis.

Once she had earned tenure and settled into her work at Allegheny, which expanded to include chairing the Women’s Sexuality Studies program, she found herself wondering, What’s next? That was when she rediscovered poetry.

The transition was scary, but also freeing. “The tropes and textures of an academic paper allow you to pretend and obfuscate,” she said. “Poetry feels more vulnerable.”

Themes of heritage and identity began to resurface in her poetry in an unexpectedly intimate way. “I always had the sense I would write about immigrants, which are such powerful yet not powerful figures in America, and family, and the larger political ramifications around the history of the coup. But I just started with stories about my memory, my own family and my relationship to them,” Caballero said. “It was just a way of asking, who am I now at this moment in time with all my experiences?”

When she was diagnosed with cancer and undertook a year of chemotherapy, radiation, and surgery, writing poetry became a lifeline—which then became the determination to produce a book. “I just felt, I could have died, and I didn’t,” she said. “Some people don’t make it. Why am I not trying to do something I always wanted to do?”

Toward this goal, a year out from her last chemotherapy treatment, Caballero took an eight-week trip during her sabbatical in fall 2017 and traveled to Santiago. She became reacquainted with members of her extended family, who opened their homes to her. She read newspapers in Spanish, often a frustratingly slow endeavor.

She spent a memorable five days alone in the Atacama Desert, and also visited former torture sites run by the regime of Augusto Pinochet, who took power after the 1973 coup. The goal behind it all: “I was trying to figure out what this space is, what it is I care about and want to see here.”

The result is I Was a Bell, which includes memories from her two childhoods, framed by an adult’s understanding of politics and dictatorship. The poems trace the tale of her family and the course of her struggle with cancer. “It’s about collective, historical, and personal memory. It’s about how the body lives through memory, and illness as a memory in the body,” she said. “It’s about being an immigrant, and exploring my sense of what those coup years were like in Chile.”

Caballero’s writing is conversational yet lyrical, mixing English and Spanish, its short sentences holding vast amounts of beauty and pain. The first poem in the collection, “You Have to Leave Me Twice,” begins with an image of splitting ashes between the velatorio (funeral parlor) and the family mausoleum. Caballero writes:

Through the writing process and her time in Santiago as an adult, Caballero has come to a realization about the country of her birth. “It’s home, but not home. Home has different ways of existing for me,” she said. “It’s as much about people as it is about space.”

These days, Caballero is beginning work on a new poetry collection about illness and the medicalization of the body, and taking aim at thorny questions in the Cognitive Humanities Lab. “For us now, thinking about political division and social justice—is empathy enough?” she asked. “How do you move someone to do something, or become anti-racist?”

One thing she does know for sure. “My way through this space and world is through language and literature,” she said. “So in a way, it’s always going to be in translation.”

The Practice of Attention