Living on the moon and traveling to Mars seemed like the stuff of science fiction not long ago, but such space travel is now being planned, with timelines of less than 10 years. And as billionaire entrepreneurs, for-profit companies, and governments jockey for position in this new space race, the question is: Who should be in the driver’s seat?

“The everyday man or woman is saying, ‘Wait a minute, am I going to see a Big Mac sign on the moon?’” says Lakshmi Karan, F00, F09, co-founder of the nonprofit Future Frontiers Institute.

Karan’s group has a different vision for the first lunar development: an institution devoted to learning. And the idea isn’t pie-in-the-sky.

Future Frontiers Institute has inked a cooperative agreement with NASA to be a partner in advancing its mission to the moon. Working with commercial companies like Blue Origin, SpaceX, and Boeing, NASA’s Artemis program aims to land the first woman and first person of color on the moon by 2024 and establish a sustainable presence there. 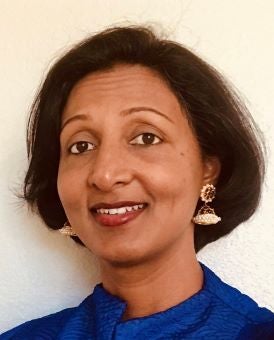 People committed to equity and sustainability need to get involved in today’s space race, says Lakshmi Karan. Otherwise, “those in power will go first and then the social sector will have to pick up the pieces of the unintended consequences.” Photo: Courtesy of Lakshmi Karan
“We said, ‘Well, let’s partner with these efforts and say, once we get there, what should the first institution be?’” Karan says. “Our proposition is, let it be a learning institution, a place where the value system is not exploitation and power, but humility, curiosity, learning, boldness, and inclusivity.”

Karan sees a place for commercial activity in space, but she wants it to be for the public good. To that end, she co-founded Future Frontiers Institute three years ago, in partnership with NASA’s Space Portal Office. The group’s mission is to ensure that space development is “responsible, equitable, and sustainable” and that it benefits all humanity, in space and on Earth.

The group is still small, with just three co-founders and another dozen or so experts volunteering their time. But its ideas are big—to work with NASA and the private sector to design and build a lunar outpost devoted to learning.

Karan acknowledges that the group may face stiff odds, given the financial and geopolitical incentives driving commercial and government space exploration. But she says, “We’ve got to try. Because if we don’t, we know what’s going to happen. Those in power will go first and then the social sector will have to pick up the pieces of the unintended consequences.”

Future Frontiers Institute hopes to bring together diverse people—representing academia, nonprofit groups, and the general public—to participate in envisioning, designing, and developing NASA’s presence on the moon, alongside government and commercial contributors. “The idea is, how do you democratize space development in the future?” Karan asks. “All the way from the participation in the design and the development to the ownership.”

Karan has written about the need for ordinary people to get involved in the “Wild West” of today’s space race, co-authoring a piece on Medium with Fletcher classmate Shannon Mullen O’Keefe, F00. “Think and act now because when you blink, the new space race will be over,” they write.

The learning institution proposed by Future Frontiers Institute would embrace the arts and humanities as well as scientific research. Its ambitions are global, and potential partners could include space agencies in Canada, Israel, India, Japan, and European countries, in addition to participants from nations that don’t have established space programs, Karan says.

Karan herself has “zero space background” but she loved Star Trek when she was growing up in India and says astronomer Carl Sagan was one of her childhood crushes. Her bachelor’s degree is in math and her early career was in computer science. She chose The Fletcher School to transition to roles with greater social impact.

She worked in social entrepreneurship with the Skoll Foundation and on strategy with a social enterprise in Africa before joining Genentech to lead its charitable giving. While serving as a judge for the Hult Prize, a global student competition to solve a pressing social issue, she met NASA Space Portal systems engineer and Future Frontiers Institute co-founder Bruce Pittman, who invited her to join conversations that led to the group’s founding. The third co-founder is Marc Lange, a Berlin-based tech entrepreneur and member of the governing assembly of the International Space University.

Karan got on board to help people who focus on equity, inclusion, and sustainability get a place at the table when decisions about space development are made. “If you want a better world that embodies all of those values, the social sector has to help design it,” she says. “This was an opportunity to say, is it possible for the values of the social sector to be in the front seat?”

A Tufts Summer Program Gets Down to Business with Innovative Ideas