Rachel Arlene Redeye Porter, F17, is exploring what it means to be Indigenous and helping others connect with who they are

Growing up, Rachel Arlene Redeye Porter, F17, was told she was not Seneca. Her father belongs to the matrilineal tribe, but her mother, who is of primarily English and Welsh ancestry, does not. That makes Porter a descendant of the Seneca Nation but not a member.

Porter spent several years of her childhood in Salamanca, N.Y., in the Allegany territory of the Seneca Nation, and continued visiting her Seneca relatives after moving to Delmar, N.Y., with her mother. She accepted what she was told about her tribal status, but it made her uncomfortable.

“When you’re trying to be what other people want you to be, it’s difficult to be yourself,” said Porter, who is co-founder of Kneading Change, which she describes as a narrative change company. “That can feel like your throat closing up, or headaches and stomach pains, or depression and anxiety, or a panic attack.” As she got older, Porter continued to honor and believe in the sovereign right of Indigenous nations to determine their own membership. But when she was 25, her interest in her Indigenous heritage brought her to The Fletcher School, where she took the course Memory Politics: Truth, Justice, and Redress with Henry J. Leir Professor of International Humanitarian Studies Kimberly Theidon. “We were studying the effects of genocides around the world on people’s cultural memory, and I began to draw parallels with my own experience,” she said.

Delving into a concentration in gender studies in international studies introduced Porter to concepts such as inequity and cultural displacement. Named the Gerald Gill Fellow at Tufts’ Center for the Study of Race and Democracy, she learned to approach the Indigenous rights movement through a global lens. She facilitated a Tufts initiative on mass atrocities and genocide, and pushed to include the colonization of Indigenous peoples within the field of genocide studies at Fletcher and beyond.

“Because I didn’t have status, I had believed it would be disrespectful to contribute publicly or even privately,” she said. “But as I found the confidence to use my voice and reach out to my community, I was embraced with more love by Indigenous people than my 5-year-old self could have imagined.”

Porter had always thought of herself as part Seneca, she said—but once she rejected the notion of “part” and embraced her identity as a whole person, her shoulders relaxed and her throat opened up. “You don’t have to exist in the fractured spaces and areas that society puts on you,” she said. “If I’ve learned anything, it’s that identity comes from the heart.”

Today, Porter is pursuing an MFA in creative nonfiction at the Institute of American Indian Arts, writing essays and memoir pieces about issues such as Indigenous beauty.

Recently, she worked for a year as editor-in-chief of Rematriation Magazine & Media, sharing stories of Indigenous women. She is now starting a campaign called Indigenous Enough, which will build support for Indigenous people who have been silenced, oppressed, or displaced, or who may reject the identities imposed on them. (Learn more about her efforts by emailing rachel@indigenousenough.org.)

“Every single Indigenous person on Turtle Island grapples with what it means to be Indigenous in one way or another at some point during their life,” she said. “Our objectives are to affirm varied and diverse Indigenous identities as valuable parts of our communities and the global Indigenous rights movement as a whole, and to connect Indigenous peoples to spaces where they belong no matter what.”

Porter has also embraced her mixed European ancestry through her organization Kneading Change, which she cofounded with Camila Furr Márquez, F17, in the wake of George Floyd’s 2020 murder by a white police officer. That summer, as difficult conversations about systemic racism began to unfold, Porter and Márquez found themselves grappling with how to participate, given their own experiences as people of mixed ancestry who experienced both discrimination and privilege. (Márquez identifies as Ute, Nahua, Latinx, Spanish, French, and Swiss-German.) 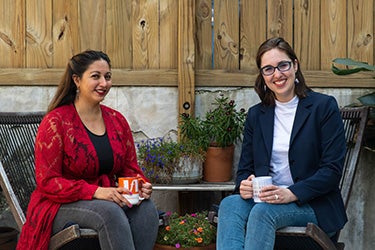 Porter and Márquez established Kneading Change to facilitate antiracist learning, primarily for white people trying to reckon with these issues for the first time. (Follow their work at @KneadingChange.) They offer several types of workshops, including a six-week online course—meeting weekly—that gives clients a safe space to talk about and work through issues of race and identity in their own lives.

In one exercise, clients come up with specific, practical things they can do to connect with their own backgrounds, such as identifying a piece of land where their ancestors once lived. Other exercises are geared more toward fostering greater consideration for other people.

“We listen to an individual’s truth, create a space where they feel seen and able to be imperfect, and guide them to create more space in their lives for the truths of others to also exist,” Porter said. “And in situations where history has privileged some truths over others, we encourage actions to help rebalance our shared existence.”

The disturbing nature and sheer scope of white supremacy can be overwhelming—and confronting it can be painful, Porter said.

But watching participants “push through the pain and choose to work through it in community, to continue showing up with good questions and an open heart, and to leave in a different place—that is emotionally huge.”

Accepting the many identities that exist around us—and within us—is not always a comfortable choice to make, Porter said. But it’s worth it.

“Diverse people, ideas, societies, world views, life ways, are necessary for us to live in alignment with the Earth as much as possible,” she said. “Our vitality depends on our ability to learn from one another.”

In the end, diversity is not just about better problem-solving, or even justice, she added. “It’s also just a much more beautiful, enriching, fun way to be and exist,” she said. “Why wouldn’t we want to see the complexity of the messy wonder of our shared universe?”