Connecting the Stories of the Past in Art

When you walk into the new exhibition at the Koppelman Gallery, the hushed tone and the objects on display create an almost spiritual presence. That’s entirely on purpose: the Armenian liturgical textiles are a reminder of a religiously based civilization that faced erasure but tenaciously survives.

Shimmering with semiprecious stones, gold thread, and metal applique, the textiles in the gallery come from communities that were persecuted during the Armenian genocide of 1915–1922 and in the massacre of the Armenians in the Ottoman Empire in the 1890s.

The embroidered fabrics of silk, velvet, and hand-blocked cotton dating back to the 18th and early 19th centuries in the show Connecting Threads / Survivor Objects are among the few remaining physical traces of these communities.

“These objects come from once-thriving Armenian communities in Turkey—my own family among them—that were either deported or exterminated,” says the show’s organizer, Christina Maranci, the Arthur H. Dadian and Ara T. Oztemel Professor of Armenian Art and Architecture at Tufts. “They are dense with meaning, emotion, and lived experience.”

The exhibition is on view at the Tufts University Art Galleries through December 5.

A fragment of red and blue silk on cotton muslin embroidered with gold and silver thread, for example, bears an image that appears to be a praying nun. Inscribed in the cloth is a dedication to Saint Barbara and the name of the person who sewed it two centuries ago. The maker, Katarinē, was a talented artist as evidenced by her meticulous stitch work, which suggests devotion to the martyr female saint she painstakingly depicted, says Maranci. Embroidered fragment, probably 18th or early 19th century, silk on cotton muslin, silk embroidery thread with gold and silver thread, by Katarinē. Photo: Courtesy of the Armenian Museum of America
A saghavard, or priest’s crown, was embellished with metallic thread, sequins, and brass fittings over blue velvet. Capped with sunburst and star designs, it presided over services at Saint Stepanos, a prominent church in the prosperous community of Evdokia (now Tokat, Turkey) for a century before the genocide.

It’s inscribed with the name of its donor, Martiros Pōyachean, who’d made a pilgrimage to Jerusalem in the early 1800s. Like Katarinē’s inscription, the words on the crown reveal Martiros’s devotion as well as his ability to travel far from his home.

Other pieces in the show, like a painted altar curtain from either India or Iran or the batik fabric of a priest’s robe from Surabaya, Indonesia, exemplify the extent of Armenian trade networks going back to the 16th century. “We often think of the modern Republic of Armenia, which is slightly smaller than the size of Maryland, but that does not reflect pre-modern reality of Armenia and Armenians, who had truly global reach in their trade connections, from Indonesia to western Europe,” says Maranci.

The Armenian Apostolic Church, whose origins go back to the first century CE, was central to the culture of the communities represented in this exhibit. “Armenian liturgical textiles are not just pieces of cloth,” Maranci says. Miters, robes, and altar curtains were “meant to sit on the head of a priest, or hang around the shoulders of a bishop, or partition spaces in a church.”

They were not made to sit beneath the glass of a vitrine, as Katarinē’s embroidered work is now displayed, or rest upon a large foam wedge as another large altar curtain does in the show, Maranci explains.

In an Armenian church, they were meant to be seen on vestments often in motion—the swirl of symbolic designs on a priest’s robe as he raised his arms to lift the host—or on a curtain pulled across an altar to conceal the mystery of a sacrament while revealing images of Christ’s story. They were active participants in the experience of the worshippers.

In an Armenian church, the liturgical vestments would have been paired with matching cuffs, collars, stoles, and miters. “Reconstructing these groupings is near impossible, as their closest relatives or matching pairs have not yet been located and may never be,” notes Maranci’s former undergraduate student Erin Piñon, who worked with Maranci on the show and is now writing her dissertation on Armenian Ottoman art at Princeton.

The Class Leading the Exhibition 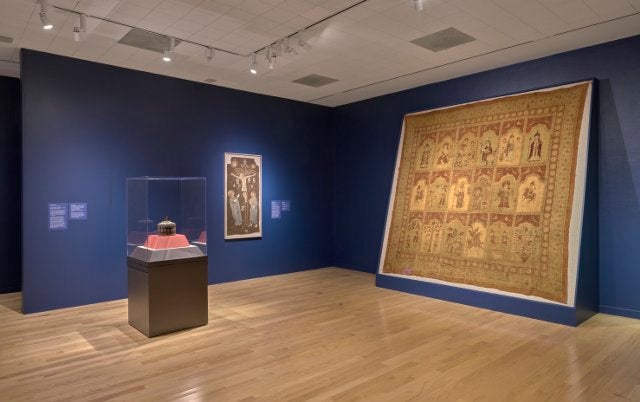 “Armenian liturgical textiles are not just pieces of cloth,” Christina Maranci says. Miters, robes, and altar curtains were “meant to sit on the head of a priest, or hang around the shoulders of a bishop, or partition spaces in a church.”
Each student was paired with a textile from the Armenian Museum of America in Watertown, Massachusetts, or the Museum of Fine Arts, Boston. Heeding COVID-19 precautions, the seminar was conducted online; however, the Armenian Museum allowed students to visit and examine their objects close-up and in person.

“With the social distancing happening in the spring, it meant a lot to have a ‘date’ with their objects, really get to know them and have ongoing relationships,” says Maranci. After doing the research, writing a long paper, and helping to conceptualize the space in the gallery with research curator Chiara Pidatella, they drafted the labels for each piece and designed the show’s welcoming banner.

“We tried to capture in the exhibition something of the liturgical service,” says Maranci. They achieved this by setting the lit objects within an otherwise dark space and dark blue walls in order to convey a spirit of contemplation. Additionally, the show’s labels provide insight into the role liturgical art actively played in the church services as opposed to typical works of art on display.

Along with Tufts scholars, the space was designed for visitors from the Armenian community. “It has already been very powerful for many who just endured a war with Azerbaijan last year,” says Maranci. “Since last September, there’s a new concern for Armenian sites now under Azerbaijani control. There’s a lot of relived trauma—a feeling of things repeating themselves from the genocide of 1915–1922. I hope this show has some power to create a place where people can feel this culture is being cherished and learned from.”

The Tufts Art Gallery is located at 40 Talbot Avenue on the university’s Medford/Somerville campus. Gallery hours are Tuesday through Sunday, 11 a.m. to 5 p.m. For more information, visit http://artgallery.tufts.edu.