How Film and Media Studies Grew at Tufts

From movie fans like me to working filmmakers and scholars of the cinema, Tufts faculty have sharpened the university’s focus on the subject

Not long ago, in a galaxy not far away that included Medford, there was a college that, without knowing it, was about to witness a curricular revolution.

In 1964, Tufts did not possess a single motion picture projector. It owned no copies of any film, and most faculty had no interest in getting any. But there appeared in those years a generation of new hires who had frequented the art movie houses of Europe and America, where they had immersed themselves in works by masters like Fellini, Antonioni, Bergman, Eisenstein, Buñuel, Kurosawa, and Truffaut, then all but unknown on campus. I was one such new hire. Each of us had a story; here’s mine.

Growing up in Hoboken, New Jersey, I went to the “pictures” three times a week with my Polish-born grandmother, who spoke only Yiddish. I first started thinking of college after seeing the Marx Brothers in Horsefeathers with all those football players and an older woman called “the campus widow.” My plans were sealed at the age of 6 after I saw Knute Rockne, All-American and became a Notre Dame football fanatic. And in the midst of World War II, I couldn’t get enough of Humphrey Bogart or Errol Flynn fighting the Germans and Japanese. Thirty years later, I taught a mini-course at Tufts titled Five Films of Bogart: Warner Brothers Goes to War. My grandmother would have loved it.

But even before I ever set foot on a college campus, the movies were part of my education. Everything I knew about the American Civil War, for instance, I learned from Clark Gable and Gone with the Wind. It was that way with Seymour Simches, Georgette Pradal, Martine Loutfi, and Juan Alonso in the Romance languages department, as well as other early cineastes at Tufts. We would run into each other at the Brattle Theatre or the Orson Welles Cinema in Cambridge, or the Coolidge Corner Theatre in Brookline. No one had expertise; there were no film courses in graduate school in our day. We just loved movies and spun theories about their relationship to culture and art on our own.

Younger enthusiasts who soon joined us—Vida Johnson in Russian studies, Joel Rosenberg in Judaic studies, and Christiane Romero, with her focus on post-war Germany—took our discussions to the next level. Then Jeanne Dillon arrived in the Romance languages department in 1979 and boosted the study of Italian film. You could see her staggering up the Hill from the college post office with enormous reels of La Strada or La Dolce Vita borrowed or rented from a local collection. That same year, a young scholar of poetry named Lee Edelman arrived in the English department, and his course on Alfred Hitchcock became as popular as Sylvan Barnet’s Shakespeare class. Dillon and Edelman brought still more insight to our discussions about film. This was no longer just appreciation; it was literary criticism. 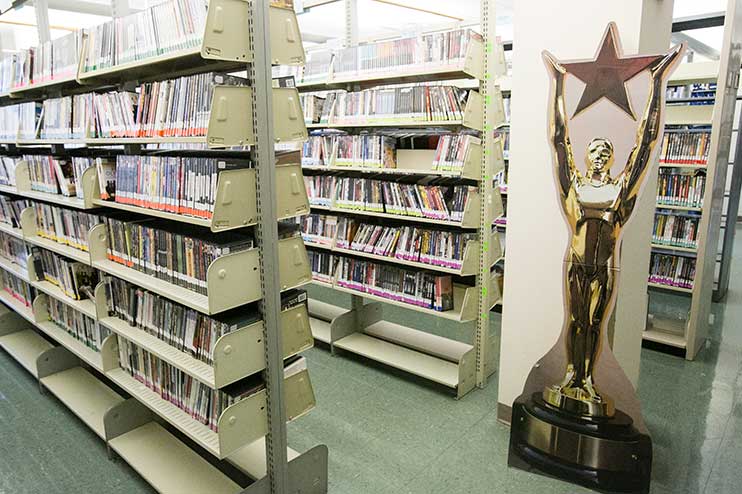 Meanwhile, others at Tufts were drawn to television—and they wanted to try their hand at it themselves.

In 1977, Andy Liebman, A78, E14P, founded Tufts University TV (TUTV), which broadcast homegrown game shows like The Roommate Game, a takeoff on The Newlywed Game, along with news and Jumbo sports. Instant replays for basketball games were a special challenge. Liebman’s old TUTV colleague Tony Bennis, A79, said the station met it by tying a rope around the belt of the cameraman. Whenever there was a shot they wanted to replay, Bennis would tug on the rope. One time there was a big, game-winning shot and he tugged so hard the cameraman fell on the floor.

Another TV trailblazer was Gerald Gill, who joined the history department in 1980 and embraced the format of television documentaries, serving as a key consultant on such programs as Eyes on the Prize, the PBS series about the civil rights struggle.

Then in 1982, Howard Woolf arrived at Tufts’ Experimental College as associate director of media technology. The Ex College had been offering a few film studies courses, but Woolf sensed that just as some students wanted to make TV shows, others wanted to make movies, not simply talk about them. He also realized that TUTV could help those students. The campus was outfitted with a cable network for the station, new digital technologies that kept coming along were pressed into service, and TuftsFilmWorks, the university’s first dedicated film production program, emerged like Venus from the clam shell.

Before long, the magical phrase “communications and media” had gained currency. The Ex College began offering a minor in communications and media studies, and it quickly became the most popular one on campus. Tufts’ Tisch College hired Julie Dobrow to direct a program in media and public service. Woolf hired one of his former students, Don Schechter, A01, AG03, who had his own media production company, as a lecturer in filmmaking. And the School of Engineering made space for an editing lab and then created a multimedia arts minor.

As interest in the media continued to grow, the drama department jumped in, led by Laurence Senelick and Downing Cless. The library budget reflected acquisitions in new formats—16mm reels of film, and then a variety of tapes, DVDs, and other material—and after a gift in 1992, the second floor of Wessell Library, now Tisch Library, became the Bernstein Media Center. Recently, the library counted more than 25,000 “film/video units.” With streaming, the Tufts community today has access to more than 200,000 items. 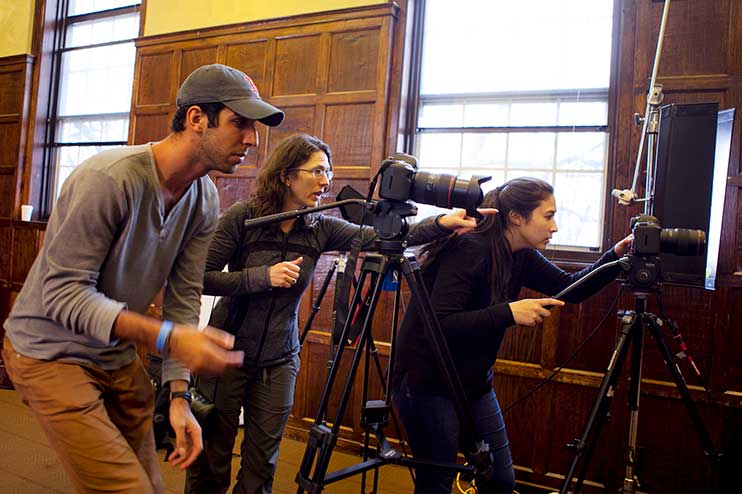 Filmmaker and Tufts professor Jennifer Burton, center, works with Kaveh Veyssi, A14, and Lai-San Ho, A13, on a short film in Crane Hall in 2014. Photo: Erin Baldassari for Tufts University

Three Tufts presidents—John DiBiaggio, Larry Bacow, and Tony Monaco—gave their blessings to and raised money for the study of different kinds of media. When Nancy Bauer became dean of academic affairs for the School of Arts and Sciences, she saw that Tufts already had a cadre of world-class film scholars like Susan Napier in Japanese animation, Kamran Rastegar in Arabic/Iranian cinema, and Xueping Zhong, who examines Chinese culture through film and other media. Bauer built upon that base and brought together a core faculty interested in film studies and filmmaking, including veteran Hollywood and indie filmmakers Jennifer Burton, A24P, and Khary Jones.

Tufts graduates soon reaped the benefits. Take Lai-San Ho, A13, who worked on Burton’s web series Old Guy, a comedy that stars Burton’s late father and draws on his experience as an actor facing ageism: She’s now an editor on the popular TV show This Is Us. However, the truth is that Jumbos have been making their way in the media world for quite a while. Among them are Meredith Vieira, J75, the former host of Today; Ben Silverman, A92, whose many accolades include an Emmy for producing The Office; and a host of agents, scouts, publicists, composers, playwrights, actors, and others, many of whom got a leg up from Tufts’ Winternship program and an L.A. alumni group called Tufts Entertainment, Arts, and Media.

Finally, in 2015, with cheerleading from Jim Glaser, dean of the School of Arts and Sciences, Tufts gave birth to a new academic program in Arts and Sciences that would incorporate and expand upon the university’s offerings in communications and media: the Film and Media Studies Program, in which students could earn either a major or a minor. Malcolm Turvey, the first faculty member in university history with a doctorate in film studies, came to Tufts to direct the program, accepting an endowed professorship named for a kid from Hoboken who grew up going to the movies. (That’s right, he’s the Sol Gittleman Professor of Film Studies.) As it happens, Turvey himself was raised on movies, only later, and in the U.K., where those old Alec Guinness movies made at Pinewood Studios and other classics were available on BBC2 and Channel 4.

In 2016, the program he’s heading up boasted just six majors. At last count in 2021, there were more than 100 majors and 25 minors. And what are all those students learning? Opportunities for hands-on training abound, but Turvey’s main goals have to do with the development of critical thinking and other broad skills that will serve students well no matter what career they pursue. Understanding the editing in a TV commercial, for example, can help viewers understand how that commercial is trying to persuade them to buy a product.

Yet there’s more to Turvey’s pedagogic philosophy than that—because he also notes that when you’re watching a film instead of a mere commercial, a general education in filmmaking “enables you to appreciate and enjoy the artistry and the creative brilliance behind the work.” Spoken like a true movie fan. Turvey, it seems, really is my kind of professor, one who loves nothing more than to sit mesmerized by moving images in the dark.

Sol Gittleman is the Alice and Nathan Gantcher University Professor Emeritus, and a former Tufts provost.

How Historians Shape the Teaching of History