Shining a Light on U.S. Latinx Art and Artists

Professor Adriana Zavala co-founded an organization to bring visibility to often-overlooked artists of Latin American and Caribbean ancestry in the U.S.

If you go the website for pretty much any museum and search for art by Latinx artists from the United States—well, good luck finding it. More often than not, if you put in the search terms Latino, Chicano, Latinx, Hispanic, Nuyorican—nothing comes up.

It’s that kind of lack of visibility for Latinx artists in the U.S. that Adriana Zavala is working to overcome. Zavala is a professor in the Department of the History of Art and Architecture, and though her academic work has long focused on Mexican art, she has expanded it to include Latinx art in the U.S.

As part of that effort, she offers courses such as The Latino Presence in Art and Visual Culture. But her work as a co-founder of the U.S. Latinx Art Forum (USLAF) is making a big impact in this nascent field in art history. The organization “champions artists and arts professionals dedicated to Latinx art,” Zavala says. 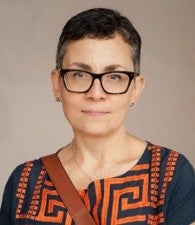 “I am an ardent advocate for this because I’m passionate about it,” Adriana Zavala says.

Now she’s bringing that effort into the wider world, as USLAF has taken on the role of administering a $5 million Andrew W. Mellon Foundation and Ford Foundation effort to recognize and fund Latinx artists over a five-year period. The program, called the Latinx Artist Fellowship, is dispersing $750,000—in the form of $50,000 unrestricted grants to 15 visual artists—in this, its first year, all in an effort to bring greater recognition to the artists and their work.

“This has been a labor of love and a constant process of teaching myself and learning from my colleagues,” Zavala says. “It’s important for all of our students to know these complicated, intersectional, contradictory histories.”

Zavala, who is from Mexico and grew up in Cincinnati, trained as an art historian focusing on Latin America, in particular Mexico. When she was going to graduate school, there weren’t any programs that focused on U.S. Latinx art, but as time went by, she studied and focused on the topic.

At Tufts, she taught the subject and, with Deborah Pacini Hernandez, founded the Latino Studies program—now Latinx Studies, part of the Department of Studies in Racism, Colonialism, and Diaspora, where Zavala holds an appointment as well. 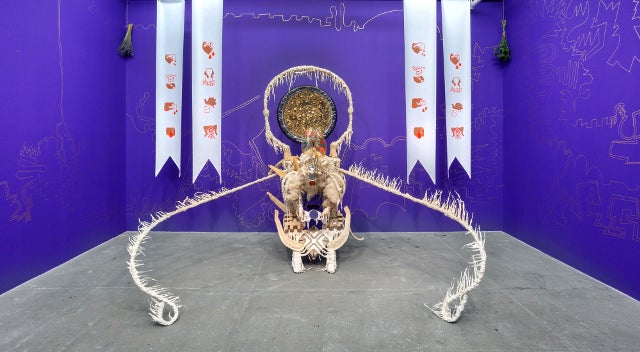 Guadalupe Maravilla, “Disease Thrower 4,” 2020, P.P.O.W, New York. Maravilla began as a professor of the practice at the SMFA at Tufts this fall, and is a 2021 Latinx Art Fellow for 2021. Photo: Courtesy of the artist and P.P.O.W New York

A Growing Organization and a Helping Hand

About six years ago, Zavala and colleagues in the field put on a session at the annual meeting of the College Art Association, and it turned out to be popular, attracting scholars focusing on the subject of Latinx artists in the U.S. 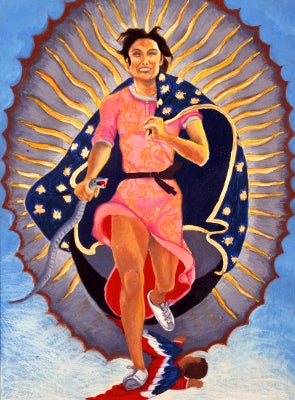 Yolanda López, “Portrait of the Artist as the Virgen of Guadalupe,” 1978, oil pastel on rag paper. Lopez was 79 when she received the fellowship this summer, but passed away in early September. “We are so honored to have recognized her artistic importance, but it’s also so sad that this recognition came so late in her life,” says Adriana Zavala.

“After the first session, a bunch of us gathered to talk about how excited we were to be in conversation with each other—none of us knew each other,” Zavala says. Rose Salseda, now an assistant professor at Stanford, proposed creating an affiliated society of College Art Association for Latinx art, which led to the formation of USLAF, with Zavala and a few others.

Fast forward several years, and USLAF—an all-volunteer organization—had grown to more than 350 members. In response to the pandemic, in 2020 with a grant from the Ford Foundation it launched the Mazorca Initiative, to assist Latinx artists suffering from loss of income. One component gave micro grants to artists to create short videos of themselves talking about a work of art—a way to help people whose livelihoods were suffering and bring their work to wider attention.

Around the same time, two program managers at the Andrew W. Mellon Foundation and the Ford Foundation had been wanting to find a way to bring greater visibility to U.S. Latinx artists, who are “really underrepresented in not just exhibitions, but museums and especially collecting,” Zavala says. They came up with a program that would give a five-year total of 75 unrestricted fellowship grants to Latinx artists—especially visual artists.

But they needed an organization to administer the program. That’s where USLAF came in. Working with the foundations and in collaboration with the New York Foundation for the Arts, USLAF solicited nominations for the fellowships and had a seven-member jury, which chose the first 15 recipients this summer. Zavala and her colleagues at USLAF were able to hire full-time paid staff for the first time, who oversee the program details.

“Some of the artists have indicated that this will be the first time they’ll be able to hire a studio assistant or an archivist, to support them in their practice, so that they can do the creative work, and have a sense that their legacy is organized,” Zavala says.

Zavala continues to research and write, in addition to her teaching and work for USLAF. She’s just finished a book “that looks at the way that Mexican intellectuals in the 20th century, as new archeological evidence was coming to the fore, began to reimagine and re-envision Mexico City as the modern incarnation of the Aztec capital city of Tenochtitlan.”

But her work bringing greater visibility to Latinx artists in the U.S. is never far from her mind. “I am an ardent advocate for this because I’m passionate about it,” she says.

Searching for Answers Through Art