Faculty comment on the upcoming U.N. summit in Glasgow and prepare to lead a student delegation to the negotiations

Global leaders at the upcoming U.N. climate change summit must commit to a detailed roadmap to reduce greenhouse gases rapidly, Tufts experts say. Without such action, the world is expected to experience increasingly catastrophic impacts in the coming years, as outlined in an August U.N. report.

The United States, which withdrew in 2020 from the agreement forged at a U.N. climate summit in Paris five years ago, needs to demonstrate that it can now lead on the issue, says Rachel Kyte, F02, dean of The Fletcher School and an international climate expert.

“People’s worst fear is that while President Biden is well intentioned and means it when he says that America is back, the political system in the United States can’t deliver,” she told Time magazine earlier this month.

But the challenges go far beyond the United States. Other nations also need to reduce emissions now, not just pledge to do so in the future, argues Kelly Sims Gallagher, F00, F03, Fletcher academic dean and professor of energy and environmental policy, in a recent article for Foreign Affairs.

“The current political fixation on pledges to reach net zero in the long term... is distracting from the immediate and tangible steps countries should be taking to reduce their emissions,” she writes. An expert on China’s climate change policies, Gallagher directs Fletcher’s Climate Policy Lab and is co-director of the school’s Center for International Environment and Resource Policy (CIERP). 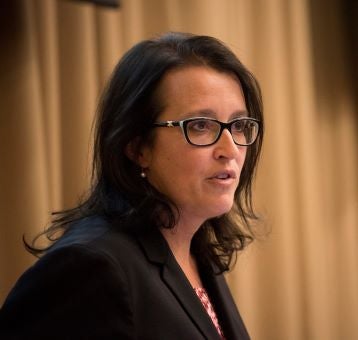 Pledges to reach net zero in the future are “distracting from the immediate and tangible steps countries should be taking to reduce their emissions” now, says Kelly Sims Gallagher, F00, F03, Fletcher School academic dean. Photo: Ian MacLellan
Kyte will attend the upcoming summit in her roles as a climate advisor to the U.N. secretary-general and co-chair of the Voluntary Carbon Markets Integrity Initiative Steering Committee. In addition, Gallagher and three other Tufts faculty and staff members will lead a delegation to the 26th United Nations Climate Change Conference, also known as COP26, which will be held in Glasgow between October 31 and November 12.

Two groups of about a dozen students and alumni each, most of them graduate students from The Fletcher School and the Friedman School, will participate. One group will attend the first week of the summit and the other the second.

Fletcher faculty, staff, and Ph.D. students are organizing and presenting at several sessions at the conference. The university will also offer a virtual exhibit showcasing research by the Climate Policy Lab, Tufts CREATE Solutions programs that focus on climate, renewable energy, agriculture, technology and ecology, and other research and educational opportunities at Tufts.

Gallagher will speak at an official side event organized by Tufts, Boston University, the Beijing-based Greenovation Hub, and the government of Ethiopia. The topic will be how to increase investment in clean low-carbon energy, following China’s announcement that it will stop funding coal. Gallagher will also participate in a panel at the India Pavilion.

Barbara Kates-Garnick, F73, F84, a professor of the practice at The Fletcher School and former undersecretary of energy for Massachusetts, plans to participate in a panel regarding the critical role of offshore wind power in achieving U.S. climate goals. That panel is expected to be in an area known as the “Green Zone” that is open to the public and hosts a wide range of events, including art exhibits and musical performances as well as workshops and presentations.

Other faculty and staff who plan to attend the summit include Sean Cash, the Bergstrom Foundation Professor in Global Nutrition at the Friedman School, and Mieke van der Wansem, associate director of educational programs at CIERP.

The Climate Policy Lab has published a series of policy briefs related to climate change in the run-up to the U.N. conference. The briefs tackle issues such as how tax credits could support low-carbon energy and how a U.S. green bank could make the economy greener and fairer. Authors include Gallagher, Climate Policy Lab managing director and Fletcher research professor Amy Myers Jaffe, and Gilbert Metcalf, the John DiBiaggio Professor of Citizenship and Public Service and a professor of economics at Tufts.

The Glasgow talks are expected to be the most significant international climate negotiations since the 2015 Paris conference, at which 196 parties signed a historic agreement to limit global warming.

Climate change caused by coal plants, car engines, and other fossil fuel use is leading to increased extreme weather such as floods, droughts, and wildfires, scientists say, and time is running out to stave off the most damaging effects.