The offshore wind farms that will be developed under a new Biden administration plan are essential for curbing climate change, according to a Tufts expert. The federal investment in renewable energy also might accelerate efforts to create an improved power grid across the nation, he says, following a funding announcement last week that the U.S. Department of Energy will invest $13.5 million to provide environmental and wildlife data to support offshore wind development. The move helps advance a joint interagency goal to develop 30 gigawatts of offshore wind by 2030—enough electricity to power more than 10 million homes.

“We have to do something now that reduces carbon emissions or risk catastrophic changes to our planet,” says Eric Hines, professor of the practice and Kentaro Tsutsumi Faculty Fellow at the School of Engineering. In addition to getting more renewable energy from wind power, “we need to build electricity superhighways across the country, not unlike our federal highway system, so that we can share power between regions.” 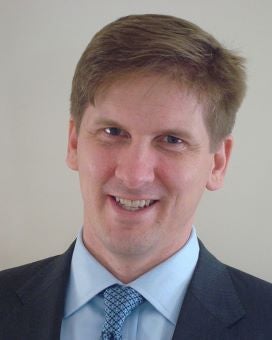 “We need to build electricity superhighways across the country … so that we can share power between regions,” says Eric Hines, professor of the practice at Tufts University School of Engineering.

The funding announcement builds on the Biden administration’s plans to accelerate the development of wind farms off the East and West coasts and in the Gulf of Mexico. In March, Energy Secretary Granholm announced national offshore wind power goals that dramatically scale up the investment in offshore wind power and that are estimated to cut 78 million metric tons in carbon emissions.

The plan is part of a larger vision for wind power as a clean energy source and reinforces the Biden administration’s intention to make the country carbon neutral by 2050. In February, the United States rejoined the Paris Agreement and committed to its goal to keep the rise in average global temperature to well below 2 degrees Celsius above pre-industrial levels. That target is intended to reduce the potentially cataclysmic impacts of climate change.

Hines spearheaded and now leads the Tufts University graduate program in offshore wind energy engineering, encompassing a post-baccalaureate program and master’s and Ph.D. degrees. A structural engineer, he has worked to bring innovations to market in the growing U.S. offshore wind industry.

In 2012, he was honored with a Designer Special Achievement Award from the American Institute of Steel Construction for his innovative work on the Wind Technology Testing Center in Charlestown, Mass., the largest wind turbine blade testing facility in North America. From 2011 to 2016, he also advised the Massachusetts Clean Energy Center on the planning, design, permitting, construction, and operation of the New Bedford Marine Commerce Terminal, the first commercial-scale offshore wind logistics port in North America.

Hines spoke with Tufts Now about the changes coming to offshore wind energy.

Tufts Now: Offshore wind capacity has advanced most significantly in Europe. Does the recent move by the Biden administration help the U.S. catch up to Europe?

Eric Hines: Yes. This is a keystone in our efforts to fight climate change. Though by way of context, it builds on considerable momentum. The East Coast offshore wind industry commitments have been led by nine states: Maine, Massachusetts, Rhode Island, Connecticut, New York, New Jersey, Maryland, Virginia, and North Carolina. Their commitments within the last five years went from about 400 megawatts to 40,000 megawatts—a 100-fold increase.

To me, this is the United States at its best. Ideas originate in the states and then they're canonized at the federal level.

The Biden plan could develop up to seven offshore wind farms, beginning with lease sales for projects off the coasts of Maine, New York, and the mid-Atlantic, as well as the Carolinas, California, Oregon, and the Gulf of Mexico. How do companies get the rights to construct such operations?

Since the 1940s, the United States has had what’s called the EEZ, or Exclusive Economic Zone, and that extends 200 miles out from the coastline. The idea is that you can't buy those waters, but in a way that is similar to how the oil and gas industry functions, you can apply for a lease from the Interior Department’s Bureau of Ocean Energy Management.

The nation’s first large-scale offshore wind farm was approved earlier this year. The project, about 15 miles off the coast of Martha’s Vineyard, Mass., is expected to generate enough power for about 400,000 homes from about 62 turbines. What are the potential challenges ahead for more of these farms?

Scale. The level that we have to ramp up offshore wind at is at such a big scale that most people may have trouble imagining what we're talking about. By scale I mean the number and size of turbines. These turbines today are taller than the 62-story John Hancock Tower [in Boston]. By 2050, we're talking about putting 2,000 to 3,000 turbines in federal waters from Maine to North Carolina to reach Biden's goal.

On that issue of scale, offshore wind power has met with a lot of public opposition. Do you anticipate more concern about the sheer size of wind farms?

Cape Wind didn't go forward because it was too close to shore, but now turbines have moved farther and farther offshore. Just as the ocean has many uses and meanings, there are many groups who are watching the offshore wind energy with concern, including the fishing industry, environmentalists, and coastal cities and towns.

I don’t see that we have any choice but to collaborate across all areas of concern. The reality is that the scale of what we have to do to run our civilization is difficult to grasp. The planet is facing an urgent need for clean energy. We know that our coastal cities and communities are at risk of being inundated with water due to rising sea levels caused by climate change. We have to do something now that reduces carbon emissions or risk catastrophic changes to our planet.

Be a part of the transition to a clean energy economy. Prepare for jobs in international industry, academia, and the public sector.

Biden earmarked $230 million for port upgrades and he’s offering $3 billion in government loans. Is that enough to accelerate a significant shift?

It is important, but it’s not a lot of money. Massachusetts already invested $115 million and built the first offshore wind port in the country, the Marine Commerce Terminal in New Bedford. New Jersey's talking about investing $400 million in ports. The investment in ports needs to be in the billions.

What’s most important to me about the Biden administration’s support is it brings visibility and coordination. The federal government controls lease permits, so it controls how quickly new projects can get going. It also regulates the grid in between states and regions, and it runs the Department of Energy, which is so critical to future R&D about our nation’s energy grid.

I’m especially interested in seeing how this helps advance the grid issue on a national level. We need to build electricity superhighways across the country, not unlike our federal highway system, so that we can share power between regions.

Is there an urgency to the development of offshore wind energy for New England?

These sources are going offline at the same time the demands on the electricity we can generate and transmit are expected to grow and we are under pressure to dramatically reduce carbon emissions. The energy transition involves three big ideas: First, electrify the energy sector; second, generate this electricity with renewable resources; and third, triple our grid capacity to accommodate this expansion and share weather-dependent renewable resources across the continent.

Could offshore wind power replace the fossil fuels we currently depend on?

I believe offshore wind power could single-handedly get us off petrochemicals on the East Coast. I see it as integrated with other clean energy sources across the United States through a macro grid.

So offshore wind power can become a more mainstream and affordable source of energy?

We’re already getting there. For the states on the East Coast, offshore wind in the past five years has become the primary source of projected renewable energy for 2050. The East Coast states all have climate plans, and the amount to which they are depending on offshore wind is significant.

How is Tufts contributing to the future of offshore wind power?

The Tufts program is built on partnerships with industry, through the Tufts Offshore Power Research and Education Collaborative [OSPRE]. That dialogue is critical to ensuring that new curricula and career path development keep pace with this rapidly expanding industry.

Looking ahead, the success of our program overall is going to be increasingly collaborative with other universities and organizations as well. We’re working with Iowa State and Clemson University, for example, to imagine the grid of the future. We're also working with the National Renewable Energy Laboratory and the Pacific Northwest National Laboratory and supporting their work reducing greenhouse emissions through the development of a clean grid.

The big question we want to address is: How can we train and educate a skilled workforce? The United States needs at least 1,000 engineers a year educated for the next 30 years to be able to deliver this industry and to meet the 2050 timeline. There's a massive opportunity. I think there are going to be literally thousands of professional jobs and tens of thousands of skilled labor jobs in this industry for the next 30 years.

That’s where Tufts is taking the initiative. We have the first program in the country that educates graduate students in offshore wind infrastructure, supply chain, and transmission. Tufts faculty are at the forefront of the industry; we engineered the first offshore wind construction port in North America, the Marine Commerce Terminal in New Bedford, and, among other projects, we’ve partnered with the University of Rhode Island to study and monitor structural design of the first offshore wind turbines in North America—the Block Island Wind Farm.

One of the most exciting things about it is how diverse our students are. When you're talking about offshore wind, you're talking about engineering, policy, the environment, fisheries, maritime affairs. Tufts is attracting people from all walks of life who want to have these broad conversations. It’s a very vibrant intellectual atmosphere that I think will contribute to the future of the industry.