A State Dinosaur Makes its Way to the State House

Editor's Note: It’s official. A Jurassic-era small therapod that once roamed the Connecticut River Valley is now the Massachusetts state dinosaur. Gov. Charlie Baker on May 2, 2022, signed a bill that bestowed that designation on Podokesaurus holyokensis (or “swift-footed lizard”).

The prehistoric chapter of Massachusetts’ past is written in the tracks of dinosaurs that once roamed the Connecticut River Valley. That history is gaining fresh attention thanks to a campaign to name an official state dinosaur, an effort promoted by Tufts paleontologist and lifelong dinosaur fan Noel Heim.

“Most people, they get excited when they learn that we had dinosaurs in Massachusetts,” said Heim, a lecturer in the Department of Earth and Ocean Science. “I hope having a state dinosaur will inspire people to go out to Holyoke to see the fossils. They’re very cool.” 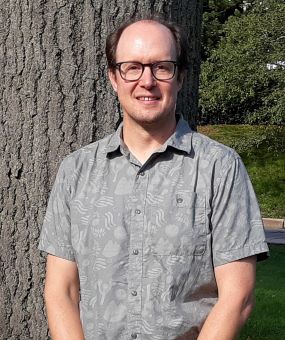 “To have a state dinosaur seemed like a good way to let people know that we have some interesting geology, some very good fossils, and a number of dinosaurs that are important to our understanding of what life was like in the Jurassic period,” says Tufts paleontologist Noel Heim. Photo: Laura Ferguson

Heim sees fossilized dinosaur footprints every time he walks through the door of Lane Hall, where he works on the Medford/Somerville campus. Embedded in a wall-mounted slab of black shale, collected about 100 years ago, are the trace fossils of Jurassic-era dinosaurs that lived in this region some 200 million years ago. Of course, what we now call Massachusetts was a subtropical wetland on the supercontinent of Pangaea back then.

Heim helped raise awareness about Bay State dinosaurs when he partnered with Representative Jack Patrick Lewis, D-Framingham, to support Lewis’s public education campaign and legislation (H.3190). At the State House in September, the bill won unanimous approval from the Committee on State Administration and Regulatory Oversight after advocates—including paleontologists, teachers, and representatives from the Museum of Science and from Amherst College’s Beneski Museum of Natural History—testified on its behalf.

On October 14, the House approved the bill, which would name Podokesaurus holyokensis as the official state dinosaur. The bill now moves to the Senate and, if granted final approval by both chambers, to the governor for his signature.

Lewis credits Heim, a scientist at ease well beyond the familiar walls of academe, as a key collaborator who helped get the effort off the ground. “He was willing to be supportive in any way that he could be,” Lewis said. “I can’t imagine doing this effort without his enthusiasm.”

Podokesaurus holyokensis is a good fit for the Bay State. It has the stamp of Massachusetts in its name, which translates as “swift-footed lizard of Holyoke” and refers to the western Massachusetts town where evidence of its existence was first discovered. The slender, fast predator grew to about 3 feet long and weighed about 90 pounds.

If approved as state dinosaur, Podokesaurus will join the eclectic assembly of all that makes Massachusetts proud, including the black-capped chickadee (state bird since 1941) and the corn muffin (state muffin since 1986). Twelve other states and Washington, D.C., have official dinosaurs.

Massachusetts already has some bragging rights about fossils. The Trustees of Reservations protects more than 800 prehistoric tracks—the first dinosaur prints ever to be scientifically described. Less well known, though, are the fossil bones connected to that record.

Heim and Lewis hope that the state dinosaur campaign can be a portal to explorations of a wider nature. The effort, which included virtual visits by Lewis and other representatives to classrooms across the state, helped children learn how laws are made as well as learning about prehistoric Massachusetts, including its dinosaurs, plants, climate, and evolution. 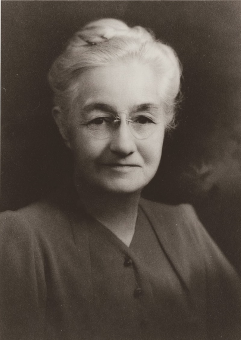 Lewis created the campaign about a year ago to help his youngest child’s Scout group. After discovering that Massachusetts didn’t have an official state dinosaur, “I realized that maybe there was this perfect cross-section of my own personal interest, my responsibilities as a Cub Scout leader, and my day job in the state legislature,” he said. “When those things can collide, it seems like a good use of my time.”

Heim was one of several paleontologists to receive an email from Lewis, who was seeking experts to help him make his case. Heim has been captivated by dinosaurs since his boyhood in Maine, not a state that has much by way of a fossil record, “but I just remember always going to the library and checking out books about dinosaurs,” he said. “They got stuck in my imagination.” (His favorite dinosaur: the brachiosaurus, whose nostrils are on the top of their heads.)

Lewis’ proposal also struck a chord with him as a teacher, Heim said. He has a longstanding passion for getting kids interested in science; before arriving at Tufts in 2019, he directed a Stanford summer science program for teenagers.

“I thought it was a neat idea and an interesting way to get kids interested in science,” he said. “To have a state dinosaur seemed like a good way to let people know that we have some interesting geology, some very good fossils, and a number of dinosaurs that are important to our understanding of what life was like in the Jurassic period.”

The campaign created an online poll, asking the public to vote on the two candidates. Its visibility was amplified by a campaign video created by the Museum of Science, spurring dinosaur fans of all ages—from kindergarteners on up—to weigh in. Podokesaurus holyokensis won by a landslide, garnering 60 percent of 35,000 total votes.

Slender and constructed of hollow bones, Podokesaurus could travel fast—up to an estimated 12 miles per hour—and had sharp teeth for snaring prey. It has been called a protobird because it bore the impressions of feathers whose purpose at the time was not for flight but most likely for regulating body temperature, said Heim.

“These meat-eating dinosaurs are very closely related to birds,” he said. “In terms of the evolutionary tree, modern birds today actually are dinosaurs.”

For Lewis, the campaign to win official recognition of the dinosaur has been an important way to connect children and adults with their elected representatives. “Maybe their first email to us was about dinosaurs, but the second and third email was about something so much more: unemployment benefits, or Mass Health. Issues they want to advocate for,” he said. “To have that happen during the pandemic, when many people have been facing unexpected hardships, has been especially powerful.”

Heim, for his part, is optimistic that the state dinosaur can continue to build interest in the story of prehistoric Massachusetts.

“I regularly get emails,” he said, “from people who ask me, ‘My son or my daughter is really interested in dinosaurs. Can you have a Zoom conversation with them, so they can talk to a real paleontologist?’ Mostly it’s little kids who are fascinated, but there are some people like me who never grew out of it.”

A New Beginning for Barnum Hall