What is Black art—and who has the agency to create it? What does it mean to create? These are some of the questions posed by Almanac, a new musical created by Tufts seniors Harrison Clark and Ben Mizrach and produced by the Department of Theatre, Dance and Performance Studies, which is running at Cohen Auditorium through November 14.

Inspired by the work of composer/conductor TJ Anderson, Austin Fletcher Professor Emeritus, Clark has fused his own experiences as a jazz musician with the research of Black scholars and artists. For the new musical, Clark and co-creator Mizrach have written a score that is drawn from genres as wide-ranging as hip-hop, soul, R&B, big band, and folk—and is performed by a cast of all Black-identifying students.

In the middle of tech week for Almanac, Tufts Now spoke with Clark about this new work:

Tufts Now: What did you have in mind when you were conceiving of this musical?

Harrison Clark: Several different things led to me saying, “I'm going to write a musical.” The first was in March of the Spring 2020 semester. Before the pandemic hit and we all got sent home, I was playing drums in the Tufts Jazz Orchestra; I had also played in the band the semester before. Both semesters, I was the only Black student in the band. In the second semester, we were preparing for a show at Scullers, a premier jazz club in Boston. And we were in the process of getting ready to do all these things that I thought were my dreams and goals, that I thought would feel great. And they just didn't: they felt really awful.

And there was one class in particular where we were playing an arrangement that had what I can only describe as a brutally white-washed edition of a tune that I really loved. And I just lost it, I started bawling in rehearsal and I got up and left. In the moment, I couldn't explain to anyone why I was feeling that way. Ben [Mizrach] was in the band—we were also in a separate band together. I had a conversation about it with him and he just got it. 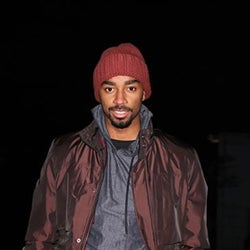 Ben’s connection to the music is a lot different than your typical Tufts student. He understood what it meant for me to be in a room where I couldn’t exercise my cultural identity, make sense of my blackness, or understand myself in a space that just wasn't built for that. That’s the core of what our musical is about.

The second experience happened around the same time. A couple of days before we got sent home, I went to see a show at Berklee [College of Music] that was headlined by Cisco Swank. It was an eight-piece band, all Black… most of the audience was Black. In the middle of the show, this white girl gets on stage with a guitar, and absolutely shattered my conception of what it was like to be in that room. She sang the most beautiful, transparent, honest music I had ever heard in my life.

It made me question what it meant to be an artist. It felt like she had like reached into my soul and extracted things and then sent them back to me. And I had never really been in a setting where that happened before and to have this white woman do that in this space, that was predominantly Black and felt like a cultural celebration. That experience made me question a lot of things about my masculinity, what it means to be an artist, what it means to write music… All that, combined with my jazz experience, is what brought me to Almanac.

How does it feel to know that a PWI (predominantly white institution) like Tufts is producing your show?

It's been interesting because the show itself is based in the critique of institution. And it can be applied to any PWI in general, but I think it's been really interesting to watch a show that is critiquing establishment to be produced by that establishment. It's not like anybody's attempting to commodify or muffle our voices. But just by nature of being in an institution like this, that's what happens sometimes. It’s systemic and structural. You can have the most well-meaning people in the world in the room, but this place has been around since 1852.

It feels cool to be the first student to have their work produced by the university like this. I'm very humbled and honored by it. But at the same time, I'm always kind of looking forward to what liberation looks like—and what it means. I would like to see a world in which my value isn't predicated on the fact that I went to an institution like this, and I don’t need an institution to do work like this. That's what I want to see. But as for where I'm at now… I'm feeling really grateful for the university and its resources while simultaneously acknowledging that this is not liberation.

A show like Almanac that centers a Black story that has 15 Black students on stage will forever be the exception at a place like this. It’s not going to be something that happens every year. That’s one of my other big goals: to revive a Black theater troupe at Tufts, so we could get more students doing things like this so that it can be a normal occurrence on campus.

The description of the show refers to Black scholars who sacrificed to create—and define—Black art. Can you talk about how Almanac builds on contributions of past Black artists and scholars?

In his essay, Hughes says the Black man in America has been programmed to look at high society as a goal to attain… that you should want to be a great classical vocalist and you should want to go to the opera rather than going to watch your favorite jazz musician on a Saturday night. And Hughes responds, ‘No, this is our culture, this is our people, this is what we do, and you've been brainwashed to feel that way.’

So, one of Almanac’s main songs is centered around that argument. I have three characters going back and forth, asking, ‘What does it mean to create? What is Black art? Who can create it and why do we do it?”

In addition to that, I’ve done a lot of archival research at Tufts. Gerald Gill, a history professor at Tufts who passed away in 2007, left a massive collection of papers on the history of Black student life at Tufts, along with his own writings and lectures. His work led me to Jester Hairston, who was a Tufts graduate, class of 1929. He went on to be a renowned choral composer and director. Jester led me to TJ Anderson, who created a number that, in part, inspired the show.

All of this is about legacy, right? I would not have had the inspiration or idea or ideological framework to write a show like this without standing on the shoulders of giants. I think that's such a beautiful thing because I feel like that's why I created this beautiful, ancestral ritual, almost like it's in my blood. I'm supposed to pass on the traditions of my people.

What is the significance of the title? In what ways is this work an “almanac”?

Almanac is the name of one of the rap groups in the show. We named the rap group way before we named the show, and all three main characters at some point end up in that rap group. When we were deciding to name the show, we went through a bunch of options that were all just egregiously terrible. And then Ben was, like, “Why don't we call it Almanac?” And I was, like, “What does that even mean?”

An almanac or the Farmer's Almanac, for example, shows you what to prepare for, what you need to do to be ready for what's coming. And he said, “In a lot of ways, I feel like this story is a guide for Black artists on how to exist within a PWI.” The Black Artist’s Almanac, if you will.

Do you have any plans for Almanac after you graduate?

Our immediate goal is to get it produced professionally. We don't really know what that looks like yet, but that's our goal. We have a lot of people who really believe in the project. There's a lot of buzz around it. Seeing how the cast has interacted with it has been heavy. It's been so spiritually fulfilling to walk into a room and to have people I didn't know three months ago singing all my songs.

Tickets to Almanac are available on the Tufts Drama and Dance department website.