Keeping the Arctic a Step Ahead of the Next Health Crisis

In 1925, when an outbreak of diphtheria in a small Alaskan village threatened to become an epidemic, dog sled teams from around the state mobilized to transport life-saving serum hundreds of miles, staving off a public health disaster. That “Great Race of Mercy” went on to be commemorated every year as the Iditarod dog sled race. Nearly 100 years later, physician and scientist Michael Bruce, M94, MG94 (MPH), faced another outbreak that threatened to overwhelm far-flung Alaskan villages. As head of the Arctic Investigations Program (AIP) at the Centers for Disease Control and Prevention (CDC), Bruce knew full-well the risks a disease like COVID-19 could bring to the state’s Indigenous communities.

“Much of our population lives in very remote regions, sometimes in crowded housing,” said Bruce, noting that 20 percent of homes in Alaska’s rural regions lack indoor plumbing. “You can imagine how difficult it is to isolate and quarantine.” When the pandemic reached Alaska in 2020, even testing people for COVID-19 was difficult, since it could take more than a week to get results from PCR tests sent to Anchorage labs for analysis. 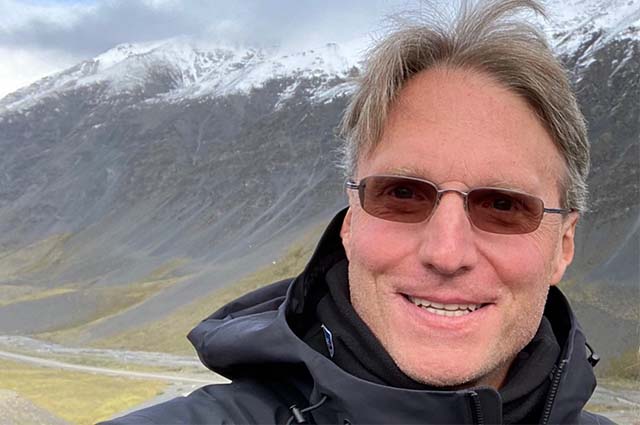 Research by Michael Bruce, head of the CDC’s Arctic Investigations Program, and colleagues found a link between homes without running water and infections, leading to new grants to bring indoor plumbing to rural Alaskan communities. Photo: Courtesy of Michael Bruce
Bruce’s unit used all the resources they had. They worked to make sure that rapid tests were quickly available to state and tribal health organizations that could then move them out to remote villages across the state; in a study they later published with tribal partners, they found those tests likely contributed to a 65% decrease in case rates. And when vaccines became available in early 2021, the AIP, which is part of the CDC’s National Center for Emerging and Zoonotic Infectious Diseases, was one of few groups in Alaska with the cold storage necessary to receive, store, and redistribute more than 20,000 doses of Pfizer and Moderna vaccines at the required -70⁰C temperatures. “We would send vaccines out to tribal entities, where there would be vaccine clinics set up just waiting for them to arrive,” Bruce explained. During the pandemic, the AIP also rapidly deployed teams of nurses and epidemiologists across the state to test and vaccinate for COVID-19. Early in the pandemic, the quick action led to the state having one of the highest vaccination rates in the country—it was even number one for a period. “That was a great success story,” Bruce said. He couldn’t rest, however, because the next challenge was around the corner, as the Delta variant arrived, vaccine hesitancy caused vaccination rates to plateau, and infection rates went up.

For over 20 years, Bruce has been leading the CDC’s efforts to monitor, decrease, and prevent harmful infectious diseases across the country’s largest and most isolated state. That mission has come with challenges, both in the geography and population of the state, that make fighting disease in Alaska unique. At the same time, Bruce says, the state’s famous self-reliant spirit has led to an especially high level of cooperation and collaboration among federal, state, and tribal entities. “Alaska is just different from any other place I’ve ever been,” Bruce said. “Because we don’t have the bench strength like you have in other places, we have to work with each other and rely on each other more. In other places it’s very hierarchical—it’s hard to reach this person or that person. Here, we all know each other.”

Much of Bruce’s work focuses on eliminating disparities for Alaska’s Indigenous population, which experiences higher rates of many infectious diseases. One study he conducted, for example, documented infections with the bacteria Haemophilus influezae type A, which can cause pneumonia and meningitis, especially in young children. He found that infection rates were more than 10 times higher in Alaska Native children compared to non-Native children, and he has worked towards the future development of a vaccine to reduce its spread.

In another study, AIP’s researchers were able to show that introducing running water in homes helped prevent the spread of pneumonia and other infections, leading to new grants to bring indoor plumbing to tribal communities.

For a particularly novel study, the program used the Alaska Area Specimen Bank, a library of over 400,000 tissue and serum specimens dating back to the 1950s, to show that high rates of gastric cancer were linked to the presence of the bacteria Helicobacter pylori. “There is a lot of interesting, groundbreaking stuff that’s been done in Alaska that a lot of people don’t know about,” Bruce said.

Ironically, when Bruce first came to Tufts School of Medicine to earn a dual MD/MPH degree, his goal was to one day work on health issues not in Alaska, but in Africa. He started learning the epidemiologic skills he would need by investigating sources of lead toxicity in children in Boston under the tutelage of legendary public health professor Barry Levy (now consultant and adjunct professor). “I got to confront a real-world public health problem and go through the steps of figuring out, ‘What’s the problem? How big is it? What do we want to do about it?’” Bruce remembered. “It was inspiring to me.”

Hooked on such epidemiological hunts, Bruce finished an internal medicine residency and immediately enrolled in the CDC’s Epidemic Intelligence Service program, which trains health professionals to become “disease detectives,” as he put it, learning to track and prevent disease outbreaks. Following that, he completed a preventive medicine residency in Washington State, where he heard about an opportunity to work with the CDC’s field station in Alaska. Since his wife was born in the state and curious to go back, and Bruce was ready for an adventure, he moved to Alaska in 2000, thinking he might stay for two or three years before eventually doing field work in Africa. Instead, he fell in love with the tight-knit community. “We just never left,” he said. “You never quite know where life is going to take you.”

In addition to the ongoing work on COVID-19—including fighting the vaccine hesitancy that he said has led to the recent increase in cases—the AIP is tackling new problems brought on by climate change in Alaska, which is warming two to three times more rapidly than the lower 48 states. “We are already seeing the effects of climate warming in a number of ways,” Bruce said. For example, the state has seen new outbreaks of zoonotic diseases—illnesses that can spread from animals to humans—due to warming water and possibly due to changing migration patterns of rodents and other animal species. “Are we seeing more giardia or cryptosporidium or rabies because beavers or red foxes are moving north?” Bruce asked. To gain a baseline, the AIP tested blood samples from people across the state for 12 zoonotic infections and plans to do a study looking at both human and animal infection. At the same time, the AIP hopes to partner with state and tribal health organizations to monitor for the emergence of new pathogens that could spread disease.

The AIP also collaborates with the Local Environmental Observer Network, a group of citizens and topic experts around the Arctic who document and track environmental events and anomalies that could affect human and animal health. That includes wildfire smoke and its impacts on lungs, and thawing permafrost and coastal ice and their effects on water and sanitation systems.

While Alaska may be the most remote state in the union, Bruce hopes that at least when it comes to addressing new threats and collaborating across institutional boundaries, it might be a model for the rest of the nation. “We’re starting to build some of the things to make us a stronger place ready to take on climate change-related disease,” Bruce said, “which is a priority for everyone.”