It’s Tiny Tufts Seen From Above

What does the Medford/Somerville campus look like in miniature? A new video shows the familiar campus from a very different point of view

You’ve probably seen videos that use a tilt-shift lens—they make the world seem like that of a miniature train set. In videos, little people move quickly through an almost magical landscapes, both familiar and strangely different.

Inspired by these videos, Anna Miller, a multimedia producer with the university’s Communications and Marketing office, decided to create one for the university’s Medford/Somerville campus. The result is entrancing.

Tufts Now caught up with Miller to learn more about how she filmed the video.

Tufts Now: What inspired you to create Tiny Tufts?

Anna Miller: I’ve always loved the tilt-shift lens effect, and how it can transform everyday scenes into miniature worlds. They’ve always reminded me of the model train sets that I used to play with as a kid. I thought that “Tiny Tufts” could be a fun way to show the energy of the Medford/Somerville campus and capture our community in a new perspective.

This was my first time making a tilt-shift video, so there was a lot of learning through trial and error along the way.

How did you capture it?

I used both a drone for the exterior shots and a tilt-shift lens—with a DSLR and tripod—for most of the interior shots. 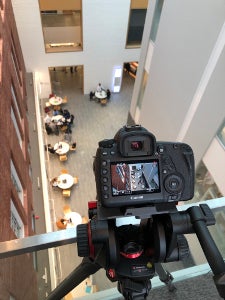 A behind-the-scenes look at the making of “Tiny Tufts”—filming the Science and Engineering Complex atrium from above. Photo: Anna Miller
The tilt-shift effect works best if you film things from high above. So I did a lot of searching around campus to find high vantage points. I used a lot of drone shots, but I also filmed timelapses from seventh-floor windows and balconies.

Most of the legwork for the project happened in the pre-production stage—everything from obtaining permissions for each drone flight to mapping out where, when, and how to film each location, knowing that drone batteries last for short periods of time.

Incredible intern, Mia Palomba, A24, and I mapped out specific days and times when particular locations would be most active with students on campus. Then it was just a matter of keeping our fingers crossed that the weather wouldn’t change and filming time lapses in these locations.

Did you practice beforehand?

Absolutely. I’m a certified drone pilot, but I always like to do practice runs beforehand. I did a few practice flights near my house on the weekends, figuring out which shots might work best for a tilt-shift video and working out any kinks before launching the project.

What were the biggest challenges?

The weather—it seemed to rain every day in October. And huge wind, too. The project was postponed by two full weeks, just waiting for the weather to turn.

How does the tilt-shift lens effect work?

Tilt-shift lenses are special camera lenses that enable the photographer to physically tilt and shift a camera lens without moving the camera. Those subtle changes alter the angle of the lens to the image sensor, and allow you to selectively choose the focal plane—what’s in focus in an image—and also capture straight lines in an image.

That’s why tilt-shift lenses are frequently used in architecture photo shoots, for example, because the photographer wants to ensure that the vertical lines of a building are completely parallel, without any lens distortion.

But they are also used to create the miniature effect, where you can shift the focal plane, or the areas of the image that are in focus, and add a blur effect to rest of the areas in the image. The shallow depth of field tricks the eye into perceiving the scene as small.

If you ever need inspiration or want to go down a fun rabbit hole, check out “tilt-shift lens photography” ideas online. People are creating some incredible work out there.