The Future of Dentistry Is Female

Women at Tufts University School of Dental Medicine (TUSDM) reached a milestone recently when the second-year class elected four women to fill all the seats on its executive board for the first time in TUSDM history. While the four class officers seem unfazed by their feat of glass-ceiling-breaking—they didn’t even realize they were a “first” until informed by one of the deans—their election is another reminder of the changing demographics of the dental profession. While women made up about 35% of practicing dentists in 2020, the American Dental Association projects they will reach 50% by 2040.

At Tufts dental school, first-year women have outnumbered men most years since 2008, and across the country, the majority of dental graduates this coming spring will be women. Based on dental school enrollment figures, that trend should hold for the foreseeable future.

In addition to the increased number of women, dental graduates are gradually becoming more racially and ethnically diverse, with Tufts among the most diverse dental schools in the country. The foursome who represent the D24s reflect this: President Zana Hunt is a Black woman of Jamaican descent from south Florida; Vice President Brianna Sammon, MG20 (MBS), is an Irish-American woman from upstate New York; Secretary Vidhi Desai is an Indian-American woman who came to the United States from India as a child and grew up in Louisiana; and Treasurer Debora Yoon is a Korean-American woman who was born and raised in Alaska.

Hunt, Sammon, Desai, and Yoon talked with Tufts Now about their chosen profession and what they think the future will hold. 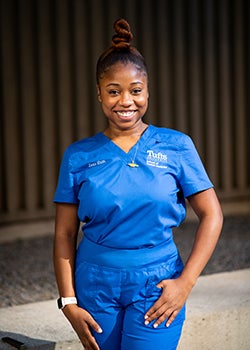 Tufts Now: What was the reaction within TUSDM to your election?

Zana Hunt: I didn’t have any idea until someone said something, and then it was really a moment of shock. It did feel very natural coming into this group of amazing people. We, of course, were happy, because what a way to make a statement, and it's not something that you expect to do.

Brianna Sammon: Once we were told, I didn't know if that was something to be proud of or something to be ashamed of, in a way, because it's 2021. So I was like, "This is amazing," but at the same time, it was like, "Why is this occurring now?" So hopefully that is becoming a more obsolete way of thinking; that females can't be leaders. Our classmates voted for us to be in this position. I don't think any of us take lightly that they see us as people who can be advocates for them. So not only do we think that we can be leaders, but they also think that, so that makes me happy. 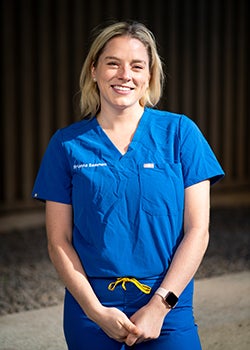 According to the American Dental Association, the percentage of women dentists increased from 24% in 2010, to almost 35% in 2020. Studies, though, show that female dentists, on average, earn less than their male counterparts; are less likely to own their own practices or to specialize; and do not advance in academic dentistry as quickly as men. How do you see that affecting your future careers?

Hunt: It reminds me of a concept in biochemistry called complement. The more a certain reaction happens, the more likely it will happen again. I feel like that's what's happening here with women in dentistry. Women are seeing women enter the field, and that is influencing them to enter the field. A lot of the dentists I shadowed before dental school were women, and watching them run their own practices, it was beautiful to watch. It made me understand that anybody can do it. You don't have to be super strong to pull teeth. You don't have to be a man to relate to your patients. When more female voices join the conversation, I believe it's going to be a trickle-down effect. The more women that are here, the more influence we will have.

A 2015 study in the Journal of the American Dental Association found that gender was among the top factors determining how women mapped out their careers, even topping debt load. What do you make of that? 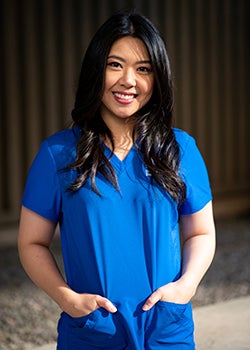 Debora Yoon: I think this is an issue that tends to be unique to women and one in which many of my fellow female colleagues have had to consider. Growing up, I always wanted at least five children. I've been mapping this out since I attended undergrad, but now, as a 28-year-old dental student, I still wonder, when's an opportune time to get married? When do we start having children? Mapping that out is part of our journey.

Growing up within my community, I had few opportunities to observe female dentists that maintained a private practice while balancing the type of family lifestyle that I envisioned for myself. I had no idea how they balanced a home life and what their support systems are like to help them. I had grown up seeing many male figures in my life that had a wonderful support system that allowed them to pursue everything that they would like. I can't deny, it does stress me out. Do I have enough years in me to consider advanced education beyond four years of dental school to pursue a specialty, without having to sacrifice additional children that I would like? I think it's very stressful, but I think it's also an amazing opportunity for people within our cohort, to pave that way, and be those women dentists that the younger applicants could look up to. 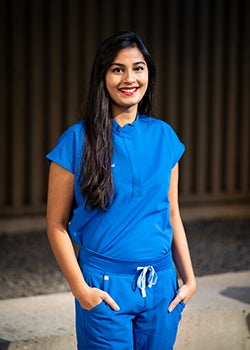 Vidhi Desai: I remember asking a woman dentist I know “Are you thinking of expanding into having your own practice?” To which she replied, “I have to prioritize my family- I have three little boys to take care of and see them grow, I cannot even think about owning my own practice now or anytime soon.” However, her husband is an on-call surgeon and he’s able to prioritize work and expand his career if would like to. This is just one example of a certain family dynamic, but I feel as women, we more often prioritize building a family or having children rather than focusing on expanding our careers because our careers don’t fit a certain timeline we make for ourselves, and this is something to think about. On the flip side, there are women whose career ambitions take priority and do not wish to have children and it’s almost as if they are shamed in society for not starting a family by a certain age or timeline. There is a lot of thinking and mapping out that a majority of women have to do because there’s lots of women-centric struggles and discrimination that men do not face.

Have you encountered sexism since deciding to pursue dentistry?

Hunt: I will say, thankfully, no, not within the actual field and not with people who have mentored me. Here at Tufts, anytime I've had to interact with any male faculty they always are so encouraging and are always so excited that I am here and willing to learn. But it is interesting when you interact with people in the public, because sometimes I'll wear my Tufts Dental sweatshirt and it's always assumed that I am pursuing dental assisting. Even when I went to get vaccinated, I mentioned that I was in dental school and the person giving me the vaccine said, "Oh, dental assisting?" And it's happened more than one time in my experience.

Do you think that that's a combination of being female and being Black?

Sammon: We were talking the other day in class about how, if someone even five years ago would walk into a dental office and see a female, they would assume, “Oh, you must be the dental hygienist,” and it’s, “No, I’m the dentist.” I don’t think people would ever do that now. I would hope not."

Everything You Always Wanted to Know About Dental School

As a Boy in Rural Mexico, His Life Was Changed by Dentists. Now Gabriel Perez Is Inspiring Others