Don Megerle, Brad Snodgrass, and Doug Boyd are named to the centennial list by the College Swimming Coaches Association of America

Three coaches who have made an impact on the Tufts University swimming and diving programs are among the 100 Greatest College Swimming & Diving Coaches of the Past 100 Years, announced earlier this week as part of the College Swimming Coaches Association of America (CSCAA) centennial celebration.

Don Megerle, head coach of Tufts swimming from 1971 to 2004; Brad Snodgrass, A93, the longtime Tufts diving coach; and Doug Boyd, who served as the team’s program development and technical analysis coach in recent seasons, are among the honorees. More than 500 coaches were nominated, and then a blue-ribbon committee of 58 voters selected the 100 recipients from 263 finalists.

Hired as the Jumbos’ men’s swimming coach at 23 years old in 1971, Megerle would become a legend in the sport during 33 seasons as head coach. He has received almost every award that a college swimming coach can earn, highlighted by the National Collegiate and Scholastic Swimming Trophy from the CSCAA in 2007, which is regarded as the highest honor in intercollegiate and interscholastic swimming and diving. He is also a seven-time New England Coach of the Year.

Beyond guiding his student-athletes to success in the pool, his mentoring of the hundreds of Jumbos he coached made a bigger impression.

“I’d have put Coach on this list even if it was a list of one,” said Marc Benvenuti, a 1996 Tufts graduate who swam for Megerle and become head swimming coach at Connecticut College in 2002. “Coach was completely unique. He coached you as a person, a student, and an athlete. I don’t believe anyone else has ever put all of those things together the way Coach did. That’s why he’s the very best of an incredible Top 100 list.”

Megerle is currently in his 51st year at Tufts overall, and is still coaching. He directs the Tufts Marathon Team, training members of the university community to compete in the Boston Marathon and raise money to support nutrition, medical, and fitness programs at the Friedman School of Nutrition Science and Policy.

“I was truly humbled beyond words to see my name and seven other New England coaches alongside the legends in our sport of swimming and diving, which included my mentor Charles E. Silvia from Springfield College,” Megerle said.

A Focus on Divers 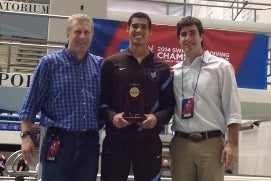 Diving coach Brad Snodgrass, left, with Johann Schmidt, A14, and men’s swimming and diving head coach Adam Hoyt, in March 2014.
Snodgrass was a student at Tufts when he started coaching Jumbo divers in 1989. He went on to coach numerous NCAA and conference champions during his collegiate coaching career, which includes stints at Boston University, MIT, and Northeastern, in addition to Tufts.

A 1993 Tufts graduate with a degree in biology, he coached Jumbo All-Americans Kendall Swett (2008) and Johann Schmidt (2012 and 2014) to a combined seven NCAA national titles. Snodgrass has been recognized as NCAA, New England, and NESCAC Diving Coach of the Year several times.

“Brad is an excellent technician and teacher,” said Nancy Bigelow, Tufts women’s swimming coach from 1982 to 2018. “He challenges his athletes and get results. He has been blessed with coaching many talented divers, but he always makes them better divers. His ability to connect with and instill a sense of confidence in his athletes is one of his greatest assets, as well as his ability to stay calm and project calm and confidence back to his athletes.”

“It’s an honor to be mentioned among so many great coaches like Don and Doug,” Snodgrass said. “I owe Coach Megerle and Nancy Bigelow a huge debt of gratitude for taking a chance on me 35 years ago. Their support then and [current coaches] Adam Hoyt and Joe Acquaviva now, make all the success our Tufts divers have had possible.”

Prior to coming to Tufts, Doug Boyd was the very successful coach of strong Division I programs at Rice, Michigan, and Texas A&M. His career as a head coach started at the University of California San Diego, where he was named the 1998 Division III Coach of the Year. His teams produced dozens of NCAA champions, All-Americans, and top team finishes at NCAA championship meets.

“This is a well-deserved honor for each of these three coaches who have had such successful coaching careers,” said Hoyt, current head coach of men’s swimming and diving. “I’m grateful to have had my path cross with such special and successful coaches. They’ve all had an impact on me over the past years, and will continue to impact how I coach my teams and athletes. To have three coaches associated with Tufts Swimming and Diving receive this honor says a lot about our program and the many athletes, coaches, and administrators who support us.”

Director of Athletic Communications Paul Sweeney can be reached at paul.sweeney@tufts.edu.