A Life Survived in the Jim Crow South

[Editor’s Note: On May 9, Chasing Me to My Grave won the 2022 Pulitzer Prize for Biography, awarded jointly to the late Winfred Rembert and Erin Kelly.]

Erin Kelly first met Winfred Rembert when she was researching her 2018 book The Limits of Blame: Rethinking Punishment and Responsibility. She had seen his artwork depicting his life in prison chain gangs in Georgia, and reached out to him. Kelly, a professor of philosophy, traveled to New Haven, Connecticut, to talk with Rembert, and was struck by his stories of his experiences in prison, and what it had done to him.

She included his stories in the book, which focuses on the retribution—not rehabilitation—that incarcerated people face. She also got to know Rembert personally. He was in his early 70s and in ill health. He wanted, he told Kelly, to tell his story in a book, and asked if she would help him write it.

Kelly was skeptical at first that she was the right person for the job; she wasn’t a literary scholar or memoir writer. But she agreed to try. She formally interviewed him, went home and wrote it up, and then met again, going over what she had written, seeing if it might work. It did. 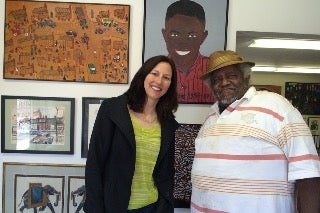 Erin Kelly and Winfred Rembert. “In a way it was easy to bring Winfred’s voice to life on the page because he has a dynamic, gripping voice, perspective, and manner of expressing himself,” says Kelly. Photo: Sharon McBlain

The two soon settled into a routine. Kelly traveled from Boston to New Haven a couple of times a month, gathering new stories; she would edit and shape them, go back and read them to Rembert, which often sparked more stories.

The result is Chasing Me to My Grave: An Artist’s Memoir of the Jim Crow South, by Winfred Rembert, as told to Erin Kelly, published in September. The New Yorker ran an excerpt in May, before the book was published, and Publishers Weekly called it a “stunning portrait of hope in the face of evil, barbarity, and racism.”

The book includes 78 color photos of Rembert’s art—paintings he created by first carving on leather and then painting with dye—which tells his life story in pictures.

Rembert was born in 1945, and as an infant born out of wedlock was given up by his mother to his great aunt, who raised him. He lived in poverty in rural Georgia, in an era when Jim Crow laws kept Black people in subjugation. His is a story of immense hardship, and also resilience, an ability to keep going despite everything that was thrown at him in life.

Tufts Now talked to Kelly about Rembert’s life and art, and the process of writing the book with him. Rembert passed away March 31, 2021, having just seen an early printing of their book. In his acknowledgments in the book, he wrote, “If it hadn’t been for Erin, this book would never have happened.”

Tufts Now: Can you give us an outline of Winfred Rembert’s life, starting in the early 1950s?

Erin Kelly: When he was just a very young boy, there was a lot of pressure put on his great aunt, who he called Mama, to take him out of school and have him pick cotton. So he left school, and didn’t get an education—didn’t learn how to read or write. That was really hard for him. He hated picking cotton and ran away from home to escape the cotton fields. 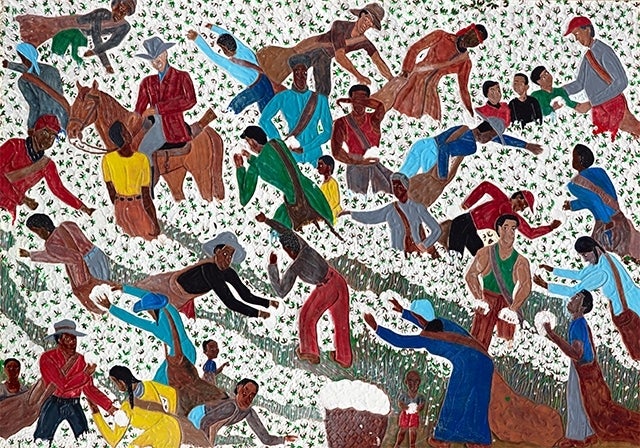 He discovered the Black community in Cuthbert, Georgia, which was full of interesting characters and a lively sense of community, and there were adults who looked after him. He worked in a pool hall. He made friends, he’d go to juke joints. This was a very joyous time in his life, having escaped a very oppressive situation, and he felt a sense of freedom and love in this special Black community, as he describes it in the book.

And from there, he got involved in the civil rights movement, which had come to Cuthbert in a small-town way. People were meeting in the local pool hall, talking about civil rights. Winfred was interested, ended up attending some demonstrations.

At one demonstration, violence erupted; there were shots fired, the police were aggressive. There were white civilians with shotguns who showed up and were abusing the demonstrators. It was mayhem. Many people fled. Winfred ran down an avenue and turned around to see a couple of white men with shotguns running after him. He turned and saw a car with keys in it. He jumped in the car and fled, which led to his subsequent arrest and incarceration, beginning in Cuthbert’s local jail.

And then he ends up in the Georgia prison system. Is that right? 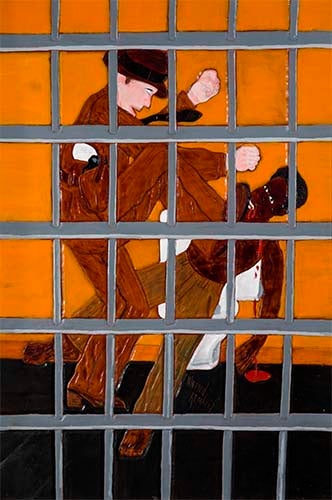 Yes. He ends up escaping from jail, which he describes in detail in the book, explaining why he did that. After the escape, he was caught and was nearly lynched by a white mob. Then he was sentenced to 27 years in the Georgia state prison system, where he was forced to work on the chain gangs and lived in prison camps.

How did he start making his art?

Later, he used leather tooling skills he’d learned in prison to create wallets, purses, pieces of leather jewelry, and things like that. His wife Patsy felt that his life experiences and the stories that he would tell around the dinner table were important and should be recorded. She encouraged him to try to paint pictures of his experiences on tooled sheets of leather, as works of art.

He had done some portraits of Martin Luther King and Malcolm X, but he was reluctant to create pictures about his own life. Eventually he sold some of the portraits, and was encouraged by his good friend Phil McBlain, an antiquarian bookseller in Hamden, Connecticut, to do art works about his life, and slowly he became more recognized for his art.

How did the art help him?

Winfred’s artwork is a big part of the story of how he reconciled—to the extent that he did—what had happened to him in the past, with his sense of self and identity and attitudes toward the future.

He says it wasn’t a healing art. That’s true. I believe he was a traumatized person. He never really got over that trauma. That’s why the book is called Chasing Me to My Grave. It’s really about his trauma and the painful, disturbing memories that haunted him throughout his life.

It’s a remarkable accomplishment to take these difficult experiences and represent them as beautiful works of art that can be shared with other people, without abstracting from the difficulty of the content. It’s very special that he had the vision and creativity—and resilience—to do that. 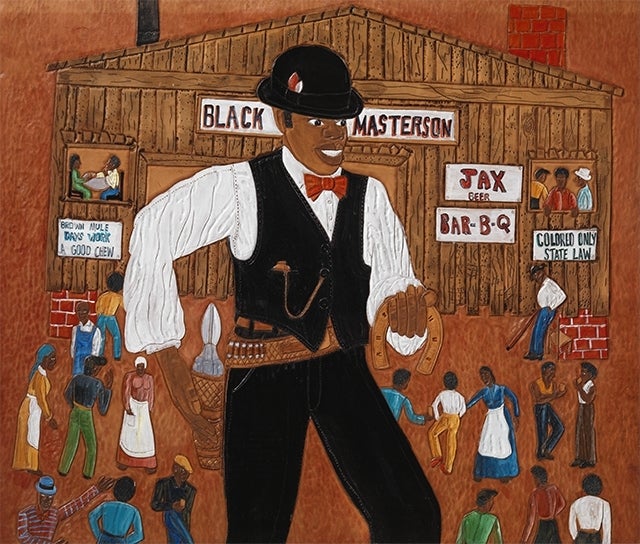 Was Winfred able to reconcile what had been done to him in his life?

It was important to recover a sense of some power over situations in which he had been so helpless, victimized, and mistreated. It was an important act of agency to reclaim his own experience and piece together his sense of himself as a person.

Are there other themes in the book?

One is a story of disappointment. Winfred’s birth mother rejected him as an infant, and he longed for her love his whole life. That was a theme in our conversations and comes up throughout the book in an important way. 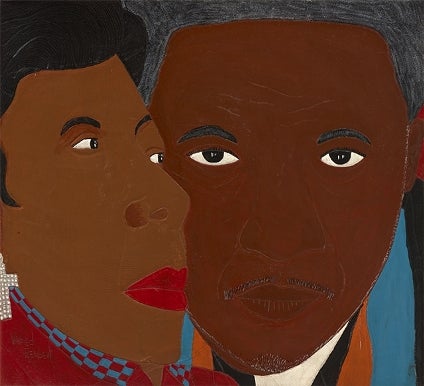 Can you say more about his birth mother and his feelings toward her?

He was so hurt that she had relinquished him as a child, and struggled to understand this. He talked about this in my first interview with him, and we decided to start the book with his struggle over her rejection of him.

He told me in that first conversation there was a painting he’d wanted to do his whole career as an artist, but he’d never been able to do it. It was going to be a picture of him walking down railroad tracks, traveling to his mother’s house, to visit her and look for her love. 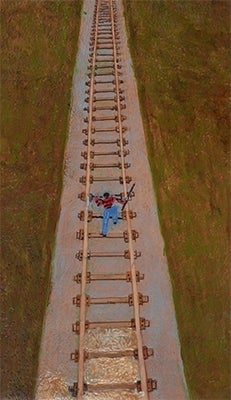 It shifted his feelings about his mother in some profound ways. We ended up coming back to that theme at the end of the book, and the book closes—spoiler alert—with the painting of him on the railroad tracks. It was a remarkable accomplishment for him to achieve that.

It was super cool.

And it was made possible by the book, by you.

Yes, he kind of knew he had to do it. It took a lot out of him, but it had a good outcome for him too—it was a very positive event.

How did interviewing Winfred and listening to the details of these stories affect you?

Sometimes it took me a couple of days to quiet my mind down after hearing what he’d been through. It was upsetting, it was sad, it was moving. I was filled with admiration for his courage and his ability to articulate what he had lived through, and his determination to share his trauma with other people. It seemed to me that would be very hard to do.

As an as-told-to writer, you have to be invisible. Can you talk about what it was like to bring Winfred’s specific voice to life on the page? 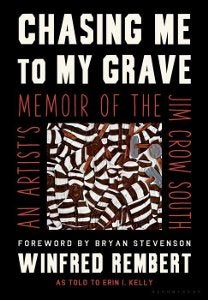 In a way it was easy to bring Winfred’s voice to life on the page because he has a dynamic, gripping voice, perspective, and manner of expressing himself. I had a lot of great material to work with, to edit, to string together to create some very compelling pages at earlier points in the process.

We decided that the best way to present the story was fully from Winfred’s perspective, in his voice. There are some quotations from other people who knew Winfred in the book, but there was no need for my voice in the book, or my perspective.

You’re a philosophy professor. How does this fit into what you do? Have you incorporated any learnings into your teaching?

The fields of philosophy and ethics tend to be very abstract. The examples used are often not worked out in a real human context, in historical situations and actual psychological dynamics.

I think listening to people’s stories—like Winfred’s—in their full detail and thinking about the context of people’s lives is an exercise that might also be helpful in philosophy, as we ask some of the more abstract questions like what is a person? What are the demands of ethics? What is justice like?

What books inspired you growing up, and does that play out in what you do now?

There were books that affected me a lot. I read Bury My Heart at Wounded Knee and was just devastated by it, astounded that that was part of the history of this country—the genocidal treatment of Native Americans and the brutality with which that played out. That was a book that really, really impressed me and disturbed me a lot.

I read Plato when I was in high school and that blew me away. I read some parts of The Republic. It was my first exposure to philosophy, and it’s also a great work of literature. That seemed really deep. And reading Shakespeare was very interesting to me because of all the interpretive layers—I found that really fascinating.