Looking Up at the Asteroids in the Neighborhood

One likely reason Americans are paying more attention is because many millions have watched the Netflix film Don’t Look Up, about a comet that’s headed for Earth with disastrous consequences. But this asteroid is no Hollywood plot device; it’s just a tiny part of what makes up our solar system.

The good news is that scientists in the real world are on the case. NASA’s Center for Near-Earth Object Studies is tasked with identifying all objects that come near Earth, like asteroids, to track any that might potentially collide with Earth.

To learn more about asteroids, where they come from, and where they are going, we reached out to Danilo Marchesini, professor of physics and astronomy in the School of Arts and Sciences. Marchesini specializes in understanding how galaxies form and evolve.

Tufts Now: What exactly are asteroids?

Danilo Marchesini: Asteroids are rocky remnants from the solar system’s formation. They orbit around the sun near the ecliptic plane—the same plane within which the planets orbit the Sun. Most asteroids are located between the orbits of Mars and Jupiter, in what is called the asteroid belt.

How many asteroids are there in our solar system?

We currently know of and have cataloged several hundred thousand asteroids—and there may be more than 10 million individual asteroids. The larger asteroids have a diameter of roughly 1,000 kilometers (about 621 miles). Despite being so 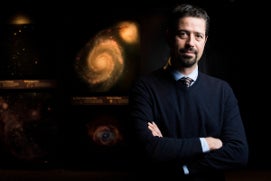 “Most asteroids are located between the orbits of Mars and Jupiter, in what is called the asteroid belt,” says Danilo Marchesini. Photo: Alonso Nichols
numerous, the total mass of all asteroids together is small, estimated lower than 0.05% of the mass of Earth.

How do astronomers find them and track them?

The first asteroid, Ceres, was discovered in 1801 by Italian astronomer Giuseppe Piazzi. Although the discovery is referred to as accidental, astronomers were looking for objects theorized to be orbiting the Sun between Mars and Jupiter.

In general, asteroids are discovered by observing the sky night after night and identifying objects that are quickly moving across the “fixed” background of distant stars. There is a whole sub-field of astronomy devoted to systematically searching for them with medium/small sized telescopes scanning the night sky. The smaller the asteroid, the fainter it is, and the harder it is to find.

Are there different types of asteroids?

The asteroid whose orbit is coming closest to Earth this month—7482 (1994 PC1)—is one of the Apollo asteroids.

What happens when asteroids collide?

What happens over the long term to asteroids?

Astronomers theorize that some of the smallest moons orbiting some of the planets in the solar system may have been asteroids caught in a planet’s gravitational field as they wandered by. Asteroids can collide with one another, and small fragments called meteoroids get ejected from the Asteroid Belt. These can produce meteors or meteorites when entering the Earth’s atmosphere.

Given the huge number of asteroids, astronomers theorize that most of them have had interactions and collisions with other asteroids during the past 4.6 billion years of history of the solar system. But in general, the largest majority of asteroids will continue to orbit the sun.