Taking a Broader View of Pandemics

Alex de Waal thinks we need to talk. He wishes we had talked back when COVID-19 first made its appearance, or better yet, before that. But at the very least we need to talk before the next pandemic.

Specifically, he wants us to talk about the worldwide societal, political, and ecological setting that encourages pathogens to arise, spread, and flourish.

And these conversations should include members of the public, not just politicians, policymakers, and scientists. “I’d like to take the pandemic discussion out of the fortress of medical and public health expertise into these wider debates,” says de Waal, who is the executive director of the World Peace Foundation and a research professor at the Fletcher School.

In his recent book, New Pandemics, Old Politics: Two Hundred Years of War on Disease and its Alternatives, de Waal lays out the history of how political and scientific leaders have consistently responded to pandemics such as cholera, influenza, AIDS/HIV and COVID-19 by “declaring war” on the bacteria or virus in question rather than engaging the affected communities in discussion. 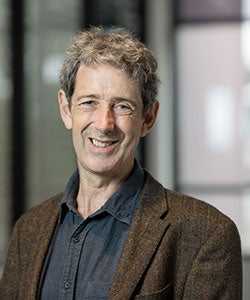 Alex de Waal
According to de Waal, the war metaphor has prospered for several reasons: it’s comforting and familiar, it allows leaders to take decisive action (like ordering shutdowns), and it holds out hope for “a victorious homecoming.” But he argues that the plotline is dangerous, misguided, and ultimately ineffective.

For one, it stops critical thinking at a time when it’s most needed. Top-down orders squelch the possibility of communities devising their own creative responses, or of the public and scientists working together.

Additionally, using war as a metaphor focuses attention on the individual microbe causing the misery rather than the conditions that led to its emergence.

In its most recent iteration, the war metaphor echoes the war on terror. “In the same way that the ‘war on terror’ led to a futile effort to end the threat to America by killing supposed terrorists one by one while neglecting the socio-political milieu that produced them,” de Waal writes, “so too the new ‘war on disease’ isolated the microbe and ignored the terrain.”

Pandemics are all too likely, de Waal says, given the “terrain” of the Anthropocene—the unofficial geologic age dating from the Industrial Revolution. Habitat destruction forces wild animals, such as bats, to live in closer proximity to people and farms. Industrial-scale pork or poultry farms provide an ideal environment for a pathogen introduced by a wild animal to spread since there is so little genetic diversity among farmed animals. If the pathogen makes the leap from a farmed animal to a human, and is then able to spread from human to human, international travel and trade roll out the red carpet to all corners of the globe.

And then governments around the world respond by declaring war on the pathogen.

“Today,” de Waal writes, “medical scientists and epidemiologists are joining environmental scientists in insisting that it isn’t enough to identify and eliminate the next microbial culprits for contagious disease: we have also to stop the ecological devastation that is generating them. Pandemic COVID-19, along with its causes and social crises, is a chance for the urgent and inescapable task of rethinking Homo sapiens’ place on this planet that we have too long considered ours.”

One way to see the whole context more clearly, de Waal suggests, is to adopt some old vocabulary. A couple of centuries ago, “pandemic” was used to refer to a specific disease that was spreading across countries or continents, while “pandemy” was used to refer to the entire societal experience of the outbreak, including its toll on the economy, mental health, education and opportunity, and neglected health issues.

“In using the word ‘pandemy’ we can reclaim the concept of a holistic disruption, reaching backwards into the ecological, social, and health pathologies that have created virulent pathogens with pandemic potential,” he writes.

In the book, de Waal describes several promising movements that are addressing those ecological, social, and health pathologies. One of these is the One Health initiative, which views human health as inextricably related to the health of animals and the environment. For example, slowing the spread of Lyme disease requires understanding the environmental conditions that lead to an overpopulation of deer (and deer ticks) near human neighborhoods.

Another promising approach is emancipatory public health, which seeks to put the public and patients at the center of any conversation about health. In his book, de Waal describes AIDS activists in Africa and in the United States who developed community-based public health responses and insisted that scientists and policymakers engage with them. “If we look at HIV and AIDS,” he says, “there are some very useful lessons to be learned about social mobilization and integrated public health with the agenda of democracy, emancipation, and gender equity.”

It may seem as if there isn’t time for community involvement when the wolf is at the door. But de Waal says this isn’t so. “[Discussion] with the local people, who are affected by the problem, is never a waste of time, even at the height of an emergency,” he writes. That’s because the people who are affected by the problem are the ones who will have to change their behavior, which they may be more likely to do if they’ve had a say in how to go about it.

“There’s no single solution,” he says. “I hope to stimulate people’s imaginations to think creatively about different ways of finding part solutions and maybe all those part solutions will add up to something more substantial.”

Ultimately, however, his book is not about solutions. It’s about starting a conversation.

“I would have liked to have drafted a new playbook for emancipatory public health in the Anthropocene,” he writes, “but this book concludes with something more modest: an appeal that it’s necessary to talk about this.”