At a recent briefing, experts urged the U.S. to increase funding and coordinate efforts for sustainable nutrition science

It was an agricultural science program in which he and his colleagues studied winter growing methods, allowing them to sell local ingredients to nearby public schools, Bustos said during a Jan. 26 Congressional briefing including scientists, researchers, and leaders in food production, co-hosted by Tufts University’s Friedman School of Nutrition Science & Policy and the Union of Concerned Scientists (UCS).

He was responding to Friedman School Dean Dariush Mozaffarian, who asked for his thoughts on the economic incentives for increasing federal investments in sustainable-farming research. Thanks to the program, Bustos said, his farmers could support themselves in the winter months, and students enjoyed healthy produce. As a bonus, the kids received an indirect education on the benefits of eating local.

“That’s a really simple breakdown,” Bustos said, before praising his fellow panelists for discussing practices that are already familiar to his Indigenous community.

Mozaffarian welcomed the sentiment, referring to the cycle Bustos described as a “holistic wheel of interconnectedness” that supports growing better food in ways that are positive for the planet and for people.

"Our food system is the leading contributor to poor health and also the leading contributor to depletion of our natural resources, and these are creating enormous economic losses in the hundreds and hundreds of millions of dollars every year,” Mozaffarian said. “We must invest in new ideas, technologies, and science to create a sustainable, equitable, and nourishing food system.”

The interaction between food production, nutrition, and the environment inspired the report on which the Jan. 26 briefing was based, From Silos to Systems, published by the UCS. It found that federal resources dedicated to exploring how current practices in food production affect nutrition, climate, and the health of communities are, in short, severely limited. 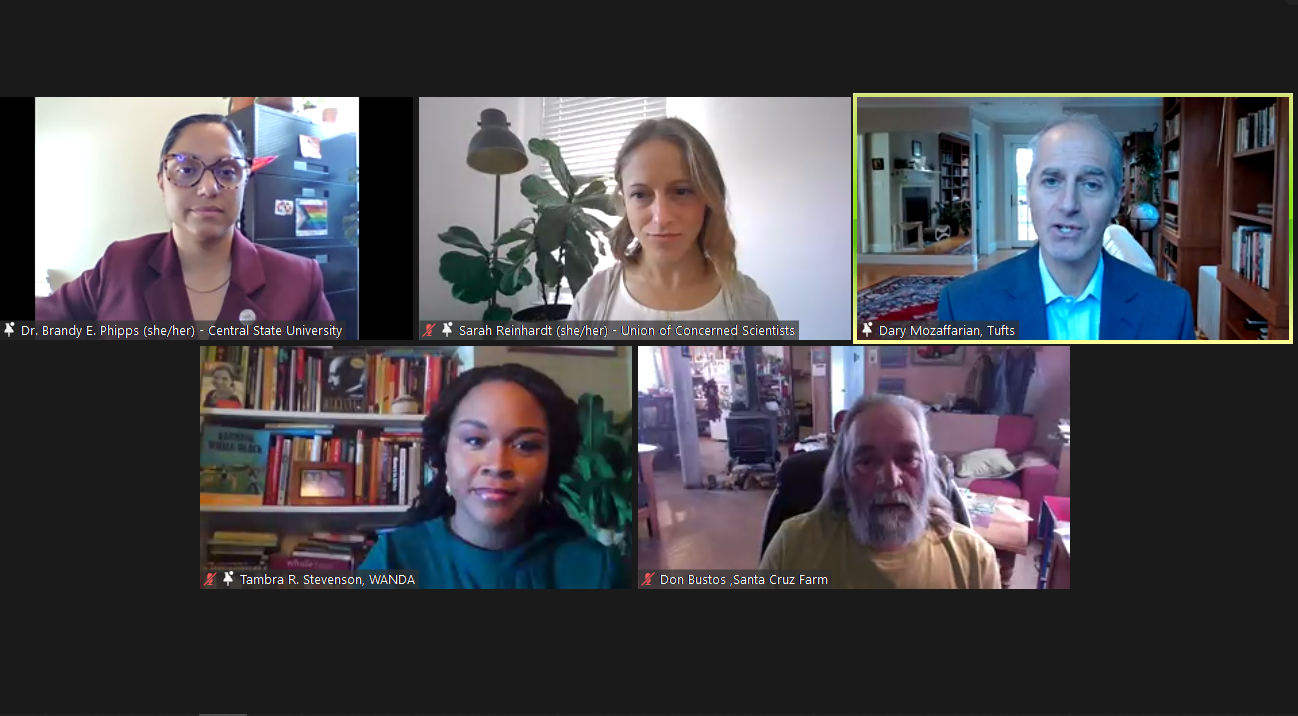 Panelists at the briefing

“Poor nutrition is the leading cause of poor health in the United States, and it kills an estimated 500,000 Americans each year,” Booker said, citing the link between harmful diets and widespread conditions such as heart disease, cancer, and type 2 diabetes. “Our current system is savagely broken. It’s broken for family farmers, it’s broken for food system workers, it’s broken for rural communities, and it’s broken for our planet.”

The system that’s supposed to yield solutions is broken, too: Enthusiasm for research is there, but the funding is not, according to Mozaffarian. “We have an entire department of agriculture, food, and environment with many scientists, many graduate students really excited about this area—and the ability to apply for and get grants in this area is very challenging,” Mozaffarian said. “There’s lots and lots of people, especially young people, really interested in this area, and not enough resources.”

Less than $16 million in federal funds have been dedicated to research and education in sustainable nutrition science, according to the report. “To put that in perspective, that’s less than 25 cents out of every thousand dollars in federal research funding aimed at the epicenter of some of our most pressing public health challenges,” Reinhardt said.

To address the public health issues facing the country, more federal funding for sustainable nutrition science is essential, Booker said. “We must support more funding opportunities in this field, as it allows us to leverage public research dollars to address a host of interconnected, big-picture issues simultaneously,” Booker said.

Intersecting Crises in Health and Food

Reinhardt underscored the need to tackle food insecurity, noting COVID-19 was initially so severe partly because many Americans suffer from chronic disease. “We all know that we’re living through a pandemic right now,” she said. “But we’re also living through a syndemic, which is what we call it when multiple epidemics or diseases affect the same populations.” Sixty percent of all U.S. adults are affected by chronic disease, the report stated, many of whom also experience problems related to failing food systems, such as fresh-produce deserts and exposure to toxins from substandard food production.

Climate change and systemic inequality are two other serious health crises directly related to nutrition and the food system, Reinhardt said, with food production a critical factor in both. “This is where sustainable nutrition science comes in. If we can identify common causes or drivers of issues like climate and diet-related disease, we can also identify common solutions, or at the very least the solutions that optimize positive outcomes and minimize negative outcomes.”

In addition to calling for more funding, the report also advised appointing a White House associate director of nutrition science, improving reporting mechanisms for federal agencies to help them better track data and progress, and incorporating interdisciplinary research in government-funded projects. “The bottom line is, the public health burdens of diet-related disease, climate impacts, and associated health disparities are not going away anytime soon,” said Reinhardt. “And in fact, they are likely to get worse and cost us more if we don’t have a coordinated strategy and approach to research that can help us address them simultaneously.”

For Phipps, who was recently awarded a $10 million USDA grant to research hemp as a sustainable aquaculture feed within the Menominee Nation, the ideal projects to be funded are integrated, meaning they incorporate as much education and outreach as they do research. “We need a continuing shift of funder expectations toward these integrated, intersectional, transdisciplinary, and applied translational projects that address both human health and food systems,” Phipps said. “And within that, a continued focus on the centering of communities who have been historically excluded from these conversations.”

The report recommended promoting far more leaders from BIPOC communities in the research and education grant space. “Out of 53 unique research projects, very few identified health equity as a key consideration,” Reinhardt pointed out. “Ten of those projects named racial or socioeconomic health disparities as relevant to the project goals, and just five stated the intent to address economic or educational inequities.”

Whether it’s combining education, outreach and research, or bringing in more BIPOC leaders, panelists agreed that coordination and collaboration between seemingly disparate entities is the crying need. “When we break down silos, we share more information, we share resources, and we work together for a united vision,” said Stevenson.

The fight against inequality, climate change, and declining human health is one for which the U.S. must prepare, Stevenson said—and a key weapon will be more and vastly better-funded advancements in sustainable nutrition. “The best example is understanding what it means to secure the nation. We have a navy, we have an air force, a space force, and we have the Marines,” she said. "We should be thinking in the same manner when it comes to nutrition security for this country.”

Filling In the Map For Better Nutrition